MALAPPURAM — The women’s wing of Jamaat-e-Islami Hind (JIH) in Kerala has lambasted Prime Minister Narendra Modi and the ruling BJP party for shedding crocodile tears for a few Muslim women suffered by Muthalaq (pronouncement of three-time divorces in one go), saying it would not allow Modi and his party to exploit this minor issue to make political gains and defame Shariah. 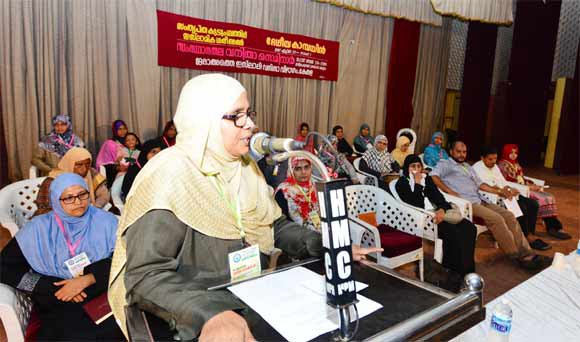 “Where were Modi and BJP when Muslim women were raped and their men and children were slaughtered during Gujarat riots? Where were they when hundreds of young Muslim men were arrested and put behind bars making false charges against them? Where were they when Sangh Parivars killed a number of Muslims and Dalits for allegedly eating beef?” asked A. Rahmathunnisa, president of the women’s wing, while addressing a mammoth seminar here Sunday.

Thousands of women from all over the south Indian state attended the seminar, which was organized by JIH as part of a national campaign to safeguard Shariah and enlighten Muslims about the Islamic law. V.T. Abdullah Koya Thangal, assistant president of Jamaat in Kerala opened the event and urged Muslims across the country to uphold Shariah and practice its teachings in their daily life.

Rahmathunnisa, who presided over the seminar, said the NDA government wanted to defame Shariah and introduce a uniform civil code by urging Muslim women to stand against Muthalaq. “Everybody knows that Muthalaq is against the text and spirit of the Qur’an and Sunnah (the teachings of the Prophet Muhammad, peace be upon him) and we are totally against Muthalaq,” she said, adding that only a few number of such divorce cases have occurred in the whole of India.


Liberals talk about who is the real representative of a section. Seeing this audience do you feel that media's only interested in what people from "Bharatiya Muslim Mahila Andolan" say and not what Muslim women say.

The women’s wing president described Islam as a complete way life designed by God Almighty the creator of the whole humanity who knows human nature and requirements. “Islamic teachings are relevant for all times and nations. It’s not an anti-women or pro-men system. It’s the most reformed universal religion,” she added. Thousands of men and women in the East and West, including celebrities, academics and scientists have embraced Islam in recent years.

She said the Muslim Personal Law in India, which covers only a part of Shariah, was instrumental in bringing about reforms to personal laws of other religious communities in the country. “Shariah protects freedom, equality and gender justice and we the Muslim men and women of India demand the application of the Muslim Personal Law,” she added. The uniform code is not practical in a country like India, which has embraced people of different religious faiths and cultures.

Rahmathunnisa called upon Muslim women to bring up their families under the shade of Islamic teachings, setting a good example for other communities to follow. She urged Mahallu administrators to strictly apply Shariah rules in marriage and divorce cases to ensure justice.

In his inaugural address, Abdullah Koya Thangal emphasized the importance of revising the Muslim Personal Law by experts in light of the teachings of the Qur’an and Sunnah. “The best way to protect Shariah is its application by Muslims in all walks of their lives,” he pointed out.

He censured politicians, intellectuals and lawyers for attacking the divine law of Shariah, which is derived from the teachings of the Qur’an and Sunnah. “The Muslim Personal Law in India represents only a small portion of Shariah,” he said and urged Muslims to learn more about the Shariah and practice it to achieve success in this life and the hereafter.

“The followers and advocates of Shariah should be vigilant to practice it in order to preserve and safeguard the divine law,” the Jamaat leader insisted.

T.K. Jameela, president of JIH women’s wing in Malappuram district, highlighted the success of the seminar in terms of large-scale participation, informative speeches and good organization. She said the all-India campaign would play a big role in enlightening Muslims about Shariah.

“This campaign is timely as the NDA government wanted to make the Muthalaq issue live to tarnish the image of Islam and Muslims and make political gains,” she told Saudi Gazette.