Ruckus at Jamia, Iftar by RSS, protest by students, who is to benefit?

The RSS-backed outfit ‘Muslim Rashtriya Manch’ a few days ago on Monday, June 5, 2017 threw an Iftar party at the Jamia Millia Islamia campus with the prime invitee being the RSS leader Indresh Kumar.  In his speech at the said Iftar party, the RSS leader advised the students to give up eating meat as it contains diseases. He pushed for his advice saying that the Prophet [pbuh] never consumed meat. He advised that instead of meat, there should be more consumption of cow milk in the diet.

On one hand, while this was happening in some small area of the campus with a few people and officials attending it, the campus on the other side stood united opposing the entire event. 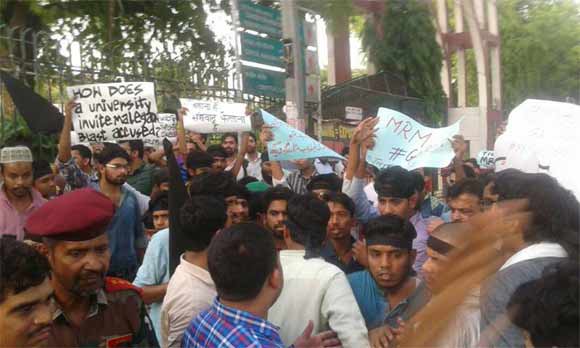 Since morning, students of the Jamia, including a majority who were fasting, gathered at the main gate of the univarsity to oppose the Iftar party and the invitation of Indresh Kumar, who is an prime accused in some crimes, proceedings of which are still ongoing in courts. His name cropped first when Malegaon blasts prime accused Colonel Shrikant Purohit mentioned him during interrogation. [See the book Godse's Children: Hindutva Terror in India]

Students were peacefully protesting, but this seemed to be a major security threat for which over 200 security personnel were deployed at the campus. It seemed less of a university of the national capital and more of a crime-hit area.

While throwing an Iftar party is a normal event in the capital, it should not be seen as an event in isolation. The Iftar party came days after an event on Triple Talaq that was organized under the same banner of Muslim Rashtriya Manch on the university premises.

There are certain concerns that occur to me as a student at the university amidst the ecosystem in which these series of happenings unfold.

First there was a lecture on Triple Talaq and then came an ‘orientation’ programme on the meat issue after the Iftar party by RSS leading lights. Are these themes at all an important concern for the society at large at a moment when the country is suffering its lowest in terms of economic growth, GDP rates and job cut.

There have been stringent attempts in the last three years to divide the student community. Every time the student fraternity stood united, there have been attempts to tone down the movement by creating divisions. I remember during the Occupy-UGC movement, there was a spark planted questioning the minority status of Jamia Millia Islamia. Similarly, the entire JNU controversy led to tagging of students as nationals and anti-nationals.

Why does Jamia allow such events?

I wonder what students need more: lectures on diet or more jobs. The recent data suggests massive job cuts ahead this year. The RSS bodies are most welcome to address other important concerns such as the job issue. Come and organize job fairs with placement opportunities. Train us for better employability.

If not, leave the students alone, don’t plant the seeds of hatred and communal tensions in the force which is the future of this nation.

Daud Arif is a Mass Communication student at Jamia Millia Islamia, he can be reached at daudarif94#gmail.com