Renowned thinker, scholar and writer and Head of Chair in Islamic Studies & Research, Yenepoya University has called upon Muslims “to launch a peace and friendship offensive” with all the politically relevant groups of the country. He was delivering a talk in a seminar on “Priorities and Challenges before Muslim Community in India” organised by a group of NGOs of Ahmedabad. More than 200 intellectuals and social activists attended the function. 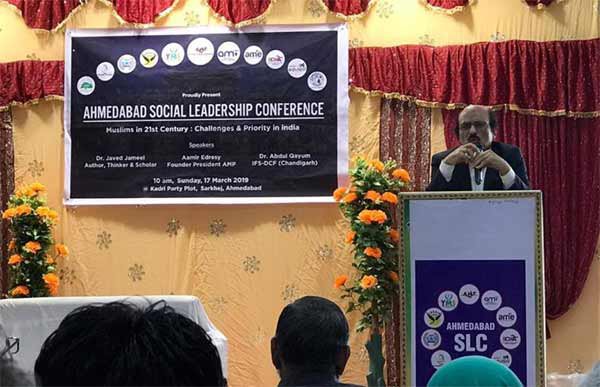 Dr. Jamil said that “politically speaking”, India comprises 5 minority groups: Hindu Dalits, Hindu OBCs, Upper Caste Secular Hindus, Upper Caste Sangh-inspired Hindus and Minorities. Muslims need to open dialogue with all of them on common issues. He stressed that even Hindutva has to be engaged on the ground of common religious morality and Indian culture, which abhor alcohol, drugs, disintegration of family system and gambling.

Dr. Jamil lamented that Muslims always tend to behave as a minority and forget their role as “ideologically second biggest majority” and “socially a part of deprived majority”. He expressed satisfaction that following his document “Muslim Vision of Secular India: Destination & Roadmap”, a new trend has been developing with NGOs now realizing the importance of “Holistic Empowerment” comprising Ideological, Social (Educational and Empowerment of Women), Economic and Political Empowerment. He asked the youth to embark on entrepreneurship at a big level. He stressed that Muslims need to have a much higher share in Corporate Sector.

Dr. Jamil also spoke about the need of Applied Islamics as a full-fledged discipline based on the application of Islamic principles in all fields including Physics, Medicine, Economics, Social Sciences and Philosophy.

President of Association of Muslim Professionals, Aamir Edresy also stressed the need of economic empowerment and explained in detail how Muslims should plan their strategies at various levels, right from the district to village. He called upon the Muslim NGOs of Gujarat to unite and develop a unified strategy.

Later, Dr. Jamil also addressed a gathering of dentists and medical experts and shared his story of transformation from a doctor to thinker and writer. He explained how the Islamic System is based on the “Supremacy of life and healthiness of life” in contrast to the current international corporate-driven socioeconomic world order, which believes in “commercializing problems as well as solutions”.

Mr. Edresy stressed upon the doctors to utilize their contacts with patients for the purpose of developing a highly conscious Muslim community, which cares not only for their own needs but also that of the larger humanity.