Some Less Known Events in the Islamic History

About 1,600,000,000 cups of coffee are consumed every day around the world. Billions of people rely on it as part of their daily routines. And yet, very few people are aware of the Muslim origins of this ubiquitous drink.

According to the historical record, in the 1400s coffee became a very popular drink among Muslims in Yemen, in the southern Arabian Peninsula. Legend goes that a shepherd (some say in Yemen, some say in Ethiopia) noticed that his goats became very energetic and jumpy when they ate beans from a particular tree. He had the courage to try them himself, noticing they gave him an energy boost. Over time, the tradition of roasting the beans and immersing them in water to create a sour yet powerful drink developed, and thus, coffee was born.

Regardless of whether or not the story of the shepherd ever really happened, coffee found its way from the highlands of Yemen to the rest of the Ottoman Empire, the premier Muslim empire of the 15th century. Coffee-houses specializing in the new drink began to spring up in all the major cities of the Muslim world: Cairo, Istanbul, Damascus, Baghdad. From the Muslim world, the drink found its way into Europe through the great merchant city of Venice. Although it was at first denounced as the “Muslim drink” by Catholic authorities, coffee became a part of European culture. The coffee-houses of the 1600s were where philosophers met and discussed issues such as the rights of man, the role of government, and democracy. These discussions over coffee spawned what became the Enlightenment, one of the most powerful intellectual movements of the modern world.

From a Yemeni/Ethiopian shepherd to shaping European political thought to over one billion cups per day, this Muslim innovation is one of the most important inventions of human history.

The University of Qaraouine in Fes

The first formal madrasa was Al-Qaraouine, founded in 859 AD by Fatima al-Fihri in Fes, Morocco. Her school attracted some of the leading scholars of North Africa, as well as the land’s brightest students. At al-Qaraouine, students were taught by teachers for a number of years in a variety of subjects ranging from secular to religious sciences. At the end of the programme, if the teachers deemed their students qualified, they would grant them a certificate known as an “ijaza”, which recognized that the student understood the material and is now qualified to teach it. 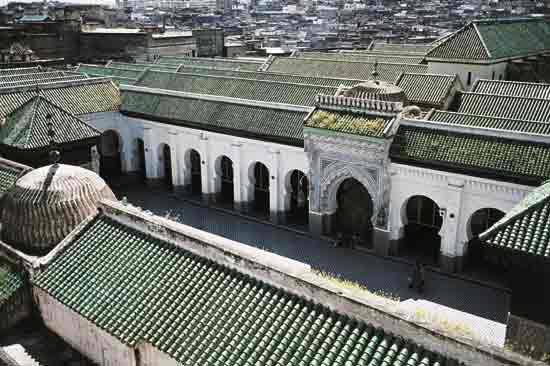 These first degree-granting educational institutes quickly spread throughout the Muslim world. Al-Azhar University was founded in Cairo in 970 AD, and in the 1000s, the Seljuks established dozens of madrasas throughout the Middle East.

The concept of institutes that grant certificates of completion (degrees) spread into Europe through Muslim Spain, where European students would travel to study. The Universities of Bologna in Italy and Oxford in England were founded in the 11th and 12th centuries and continued the Muslim tradition of granting degrees to students who deserved them, and using it as a judge of a person’s qualifications in a particular subject.

While many secondary school students struggling through math classes may not particularly appreciate the importance of algebra, it is one of the most important contributions of the Muslim Golden Age to the modern world. It was developed by the great scientist and mathematician, Muhammad ibn Musa al-Khawarizmi, who lived from 780 to 850 in Persia and Iraq.

In his monumental book, Al-Kitab al-mukhtaar fi hisab al-jabr wa-l-muqabala (English: The Compendious Book on Calculation by Completion and Balancing), he set forth the basic principles of algebraic equations. The name of the book itself contains the word “al-jabr”, meaning “completion”, from which the Latin word algebra is derived. In the book, al-Khawarizmi explains how to use algebraic equations with unknown variables to solve real-world problems such as zakat calculation and inheritance division. A unique aspect of his reasoning for developing algebra is the desire to make calculations mandated by Islamic law easier to complete in a world without calculators and computers.

Al-Khawarizimi’s books were translated into Latin in Europe in the 1000s and 1100s, where he was known as Algoritmi (the word “algorithm” is based on his name and his mathematical works). Without his work in developing algebra, modern practical applications of math, such as engineering, would not be possible. His works were used as math textbooks in European universities for hundreds of years after his death.

Speaking of universities, that is also an invention made possible by the Muslim world. Early on in Islamic history, mosques doubled as schools. The same people who led prayers would teach groups of students about Islamic sciences such as Quran, fiqh (jurisprudence) and hadith.

As the Muslim world grew, however, there needed to be formal institutions, known as madrasas, dedicated to the education of students.

Many students who attended high schools and universities in the Western world are familiar with the marching band. Made up of a group of a few hundred musicians, a band marches onto a field during an sporting event to entertain the audience and cheer on the players. These school marching bands developed from the use of marching military bands during the Gunpowder Age in Europe that were designed to encourage soldiers during battle. This tradition has its origins in the Ottoman “mehter” bands of the 1300s that helped make the Ottoman army one of the most powerful in the world.

As part of the elite Janissary corps of the Ottoman Empire, the “mehter” band’s purpose was to play loud music that would frighten enemies and encourage allies. Using enormous drums and clashing cymbals, the sounds created by a “mehter” band could stretch for miles. During the Ottoman conquest of the Balkans throughout the 14th-16th centuries, mehter bands accompanied the fearsome Ottoman armies, who seemed almost invincible even in the face of huge European alliances.

Eventually, Christian Europe also caught on to the use of military bands to frighten enemies. Legend has it that after the Ottoman siege of Vienna in 1683, the retreating Ottoman army left behind dozens of musical instruments, which the Austrians collected, studied, and put to their own use. Armies all over Europe soon began implementing marching military bands, revolutionizing the way war was fought in Europe for centuries.

It’s hard to imagine a world without photography. Billion dollar companies like Instagram and Canon are based on the idea of capturing light from a scene, creating an image from it, and reproducing that image. But doing so is impossible without the trailblazing work of the 11th century Muslim scientist, Ibn al-Haytham, who developed the field of optics and described how the first cameras work. 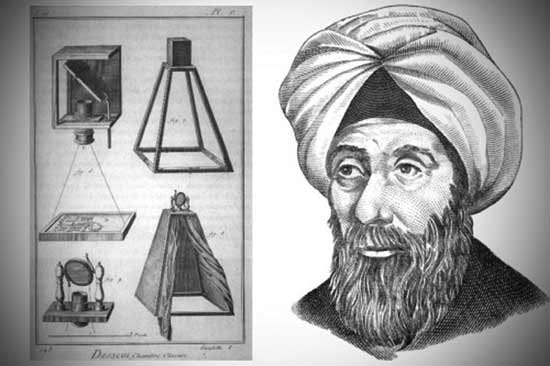 The basic principle of a pinhole camera

Working in the imperial city of Cairo in the early 1000s, Ibn al-Haytham was one of the greatest scientists of all time. To regulate scientific advancements, he developed the scientific method, the basic process by which all scientific research is conducted. When he was put under house arrest by the Fatimid ruler al-Hakim, he had the time and ability to study how light works. His research partially focused on how the pinhole camera worked. Ibn al-Haytham was the first scientist to realize that when a tiny hole is put onto the side of a lightproof box, rays of light from the outside are projected through that pinhole into the box and onto the back wall of it. He realized that the smaller the pinhole (aperture), the sharper the image quality, giving him the ability to build cameras that were incredibly accurate and sharp when capturing an image.

Ibn al-Haytham’s discoveries regarding cameras and how to project and capture images led to the modern development of cameras around the same concepts. Without his research into how light travels through apertures and is projected by them, the modern mechanisms inside everyone’s cameras would not exist.