The recent outpouring of support for the “development” agenda of the Prime Minister, Mr. Narendra Modi, by several leaders of the Catholic and Protestant churches may possibly stave off the immediate attention of the dreaded Intelligence Bureau and the Ministry of Home affairs, but it is not likely to reduce the deep and seemingly abiding distrust the Indian political and social system has of what is popularly called the “Missionaries”. Nor will it mitigate the hate that is now erupting in India against religious minorities.

Missionaries was a term once used in the Indian subcontinent to describe clergy, religious and social workers who came in various periods over three centuries from Italy, Spain, France, the United Kingdom and later from the United States. They set up schools and hospitals, and mission stations, in the hills, plains and deep forests of much of the Indian land mass.

The coming of foreign, and almost entirely White, religious personnel stopped soon after World War II, but there was still a sizable number in the country at Independence. In 1993 there were just 1,923, and by 2001, it had come to just a little more than half of that, at 1100 registered foreign missionaries in India. We have no official data for 2013-14, but estimates vary from 200 to 500, some of them Indian nationals. Most of them have lived in India for periods ranging from 20 years to 60 years.

This is far removed from the image that the Sangh Parivar, and the government, paints of a land teeming with western missionaries. But since the 1960s, it is impossible for any priest or Nun to get a “Religious Visa” to India, and many who come here on tourist visas have to sign papers at Indian consulates that they will not indulge in any religious activity in India. Only rarely is a visa given to Tele Evangelists for “Crusades” or mass prayers.

But it will not be entirely correct to suggest that it is just the Rashtriya Swayamsewak Sangh and its political face the Bharatiya Janata Party that oppose mission work on grounds of ideology and relgion. The larger Indian political leadership, both in the Congress and in other parties including those emerging from the socialist movement of Mr. Ram Manohar Lohia of North India have seen the community as an appendage of the British Raj. The leader of the Freedom struggle, Mohandas Karamchand Gandhi, already called a Mahatma and later formally named the Father of the Nation, had serious doubts about missionaries. E. Stanley Jones, Stanley Jones in is book The Christ of the Indian Road, records an encounter with Gandhi who he asked “though you quote the words of Christ often, why is it that you appear to so adamantly reject becoming his follower?” Gandhi’s reply was clear: “Oh, I don’t reject your Christ. I love your Christ. It is just that so many of you Christians are so unlike your Christ”.Gandhi’s statement moulded the political discourse in Independent India.

The Constitution of India promulgated in 1950 nonetheless gave Christians the right not just to profess and practice their faith, but also to propagate it, with some law givers stressing that propagation of faith was integral to the religion. But among the first acts of the government was to withdraw affirmative action from untouchable groups other than those professing the Hindu faith. The issue has agitated the community ever since.

The absolute ban on freedom of faith of this 16 to 20 per cent of the population was ostensibly to prevent their walking into Christianity, or rarely, into Islam.

The bane of the Christian community has been the anti-conversion laws, ironically called Freedom of Religion Acts which brought the State firmly into a process that was otherwise between a person and his conscience. Six states have these laws on board, another has enacted but not yet implemented it. The BJP has said in its election campaign it intends to make this a national law. Governmental permissions and severe penalties are the cutting edge of these laws. Political parties, barring perhaps the Marxists, and even the Supreme Court of India tend to agree to the need to the anti conversion laws. The United Nations Human Rights Council, European Union and international freedom of faith organisations have called them a grave violation of the UN Charter on fundamental human rights.

The premise that no one converts unless he is being lured, cheated or coerced into Christianity – or Islam – is now a major political slogan in the Bharatiya Janata party’s mission to control every regional government after coming to power in New Delhi in May 2014. And it is targetted as much against Muslims and it is against the Christian community.

The Muslim community has been the object of suspicion after the Partition of India in 1947, which saw unprecedented violence, that has left an unspoken but virulent Islamophobia in Indian society. The recent acts of terror in India have deepened this chasm between the communities.

This officially sanctioned suspicion, and from it the political hate, underpins the current campaigns by the Rashtriya Swayamsewak Sangh and its subsidiaries which target both the Christian and the Muslim communities, specially in north and Central India.

A new dimension has been added this year in the electoral rhetoric of the BJP in its very successful run up to the General elections earlier this year, and elections to the legislative assemblies of several states in north and west India. This is a campaign to evoke fears in the highly patriarchal feudal societies in rural India that the security and sexual purity of their women is being threatened by young Muslim and Christian men.

It began innocently enough in Kerala with the state High court asking the police of there was a design in several cases of inter-community marriages, in which the men were almost always Muslim. The police could not find any design and the matter seemed to have ended, till now when it erupted in far away north India. But now, the police are on the side of local political thugs, and both seem acting under the patronage and protection of powerful leaders in New Delhi.

Love Jihad, as it is called, has been presented as a grand design in which Hindu young women are seduced by Muslim in Christian men, lured into marriage, and the converted in a conspiracy to alter the demographic profile of “Hindu” India. 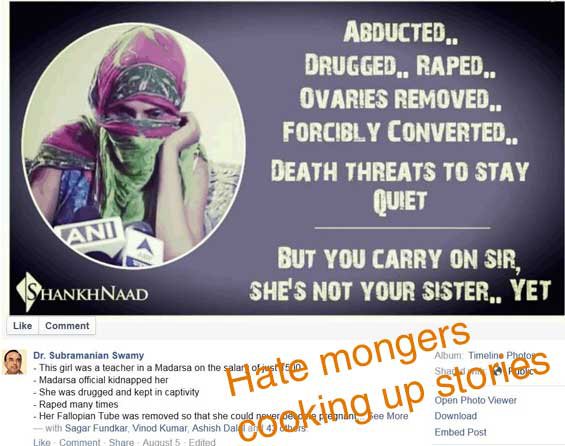 Hate Monger Dr. Subramanian Swamy posted this about the Meerut Love-Jihad case which later turned out to be false.


The result has been the hounding of young men, and the humiliation of young Hindu women in areas as distant from each as Meerut in Uttar Pradesh and Bhopal in Madhya Pradesh. In Madhya Pradesh, the district police chief “annulled” the marriage of a Christian man and a Hindu woman under pressure of a Hindutva mob.

The governments of the states, and more than that, the federal government in New Delhi headed by the Prime Minister, Mr. Narendra Modi, have maintained an intriguing silence, with no official condemnation of this criminal intimidation of young couples in love. This has led civil society groups to believe that the hate campaign has the blessings of the ruling dispensation in the country. The inaction of the superior courts and the national Human Rights commissions in failing to take cognisance of these extra-judicial intrusions into the personal life of citizens compounds the crisis.