Recently, when Prime Minister Narendra Modi said at an ASEAN summit that terrorism had no religion, Indian Muslims heaved a sigh of relief. This line, that “terror has no religion”, is a relatively new Sangh refrain, being mouthed as a policy mantra by all persons affiliated to it. 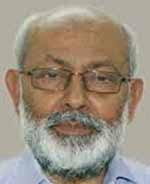 However, it was not always so. The earlier line was “Not all Muslims are terrorists, but all terrorists are Muslim”. This suddenly changed during UPA-II when Sangh-related terrorists like Aseemanand, Col. Purohit, Sadhvi Pragya Singh and many others were caught and jailed for staging major terror attacks like Samjhauta Express and Malegaon (twice) cases.

These Hindutva votaries had been attacking Muslim targets with a communal motive. That’s why security agencies called them “Hindutva terrorists”, without mincing words. Senior BJP leaders like L K Advani protested vociferously against this label, but officials persisted with the nomenclature. To his credit, the then Union Home Minister P C Chidambram also publicly called them “Hindutva terrorists” repeatedly, despite protests by BJP leaders.

At that point they dropped their “all terrorists are Muslims” refrain and came up with the new stand that “terror has no religion”. Mr. Modi’s assertion at ASEAN is a continuation of that policy. We will certainly come to the conclusion that terror has no creed when we look at the terror map of the world. We have all religions represented there in a fair proportion.

The earliest known terrorists were the Jewish Sicari, nearly 2000 years ago. Many centuries later came the Ismailite Muslim Hashasheen (Assassins), disciples of Sheikhul Jabal Abdullah Ibn Saba. In the 19th century came the Thughs, who were Hindus. They misled victims, cut their heads and offered it to Kali Devi. In the 20th century India many freedom fighters were declared “terrorists”, both Hindu and Muslim, for resorting to violent means in their freedom struggle.

The first well-known terrorists in the 20th century were the Jewish Hagannah, Irgun and Stern gangs in mandated Palestine, who attacked Arabs and British Mandate officials. Most of the Israeli presidents and prime ministers before the current lot were declared terrorists by the British Mandate government. These terrorists included former prime ministers of Israel, Begin and Shamir who had led secret terrorist organization and carried awards on their heads.

That terror has no colour or creed is evident from a look at the Muslim, black Boko Haram, white Christian German Baader-Meinhof, Spanish Basque terrorists, Irish IRA, Muslim Al-Qaeda, Hindu Naxals and Hindutva terrorist outfits, Yerevada Buddhist Sinhala terrorists and Buddhist terrorists of Myanmar and Sikh Babbar Khalsa in India. This is only a short list. In India, Naxal terror has been time and again declared officially as number one internal security threat.

Now, the point is not which religion, race or skin colour to blame for terror, but how to seriously try to understand it, address its root causes, take appropriate policy measures, gradually end it and try to rehabilitate the alienated in the mainstream society.

So, what is terrorism, which we want to curb? There is no standard definition despite ongoing efforts at the UN for the last four decades. This is because one man’s terrorist is another man’s freedom fighter or activist for social justice.

In the absence of a standard definition, let us go by the widely accepted working definition. It defines terrorism as an act of random violence, not necessarily targeting immediately concerned people, but even common people unrelated with systems of power. Such violence, this definition says, is inflicted on targets for political purposes. This is why religious or sectarian violence often comes under crimes (even the most heinous ones) to be handled separately.

Now, what can be done to contain it? The first step is to have an equitous and fair society, with equal opportunity and equality before law. Unless a society ensures these basics, terrorism cannot be defeated. In case of foreign terrorists operating on our territory, they should simply be eliminated with force, no questions asked. In case of our own alienated people like Naxals, we should try to create a more equitable order where their personal, social and common property rights should be restored and respected. There is no short-cut to winning the war on terror. It takes a comprehensive strategy and patient work.(iosworld.org)