Shia-Sunni pray their third Eid together

New Delhi: Sunni Muslims prayed behind a Shia imam during Eid ul Azha prayers this year. It was organized through the social media unity campaign, "Shoulder to Shoulder" which started two years back in Delhi when Shia prayed behind the Sunni imam of Jamia Millia Islamia mosque. Then, last year at Lucknow, Shia prayed behind a Sunni imam at Sibtainabad Imambada while the joint prayer was again held in Delhi.  The "Shoulder to Shoulder" campaign has now expanded to other cities across India. 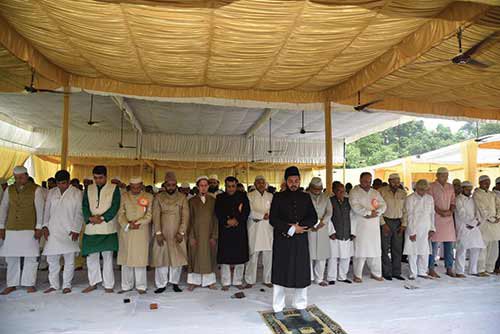 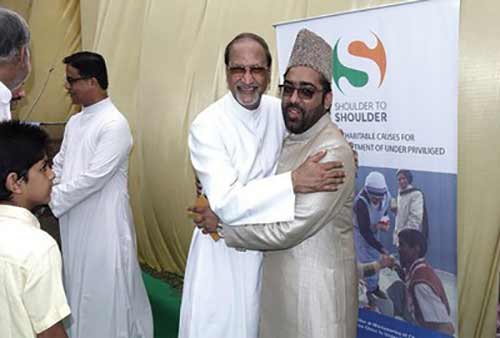 Asad Haider Zaidi, a Jamia Millia alumnus, took forward the mission of unity among Muslims along with MG's Mazin Khan in Delhi two years back. Many members of Sunni community including activist Ovais Sultan Khan and MG's Kausar Usman reached Qudsia Mosque of Dargah Shahe Mardan in Jorbagh to perform Namaz with Shia this year. The delegation was cordially received by journalist Mohammad Kazmi representing the Anjuman-e-Haideri which manages the Dargah.

"Shoulder to Shoulder" organization was formed in 2014 in Delhi by Syed Asad Haider Zaidi. It was endorsed by Dr. Kalbe Sadiq, the eminent Shia Muslim leader and vice president of All India Muslim Personal Law Board (AIMPLB) as well as by Dr Zafarul-Islam Khan, the then president of the All India Majlis-e-Mushawrat who was instrumental in convincing the Imam of the Jamia Millia Islamia mosque, Maulana Sulaiman Qasmi, to hold the joint Eid prayer.
The joint Eid prayer was  held once again on the lawns of Shahnajaf Imambada in Lucknow this year. It was attended, among others, by Maulana Kalbe Sadiq and Dr Zafarul-Islam Khan, editor of The Milli Gazette.

The motto of Shoulder to Shoulder is "Universal brotherhood".  On this path, this year's joint prayer at Lucknow also witnessed interfaith unity as after the joint Shia-Sunni namaz at Shahanajaf Imambada in Lucknow, Sikhs distributed Sewaiyaan (sweet vermicelli) to the Muslims while notable Hindus and Christians also participated in the Eid Milan. Dr Gurmeet Singh, prabandak Yahiyaganj Gurudwara, Father Ronald D'Souza, second in command after the Bishop of the Catholic Diocese of Lucknow, and Hindu priest Mahant Giri Devi, attended the historic event to give the message of religious unity and brotherhood.