A “social experiment” in a Delhi neighbourhood is questioning the standard segregated housing practices of Hindus and Muslims. Known social activist Faisal Khan and his friend Kush Kumar Singh, a physician, are now living in a single flat in the predominantly Ghaffar Manzil in New Delhi’s Okhla area. They have been sharing the flat for the last three years. 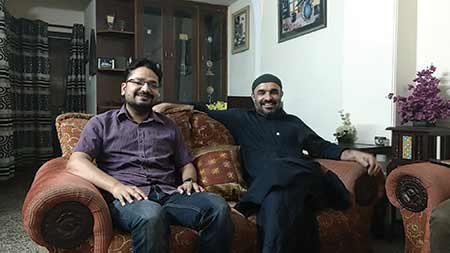 
“It is a social experiment. By staying under the same roof, both Kush and I want to experience for ourselves what is it that makes us different. I am a religious Muslim, and he is a devout Hindu and also a vegetarian. We want to see…can a Hindu and a Muslim live together in amity…can they really tolerate each other…can they engage in more social interactions,” said Faisal.

“Having grown up in a household where a Muslim is not regarded your friend or someone you socialise with, Faisal’s offer to me to stay in this Muslim colony to see for myself how they live, what they think, eat, what they think of the Hindus, was interesting to me. I wanted to have that experience, to see for myself what it is that makes us different, so different that we can’t even think of living next to each other, that we can’t think of socialising with each other, that we, in fact, fear and abhor each other’s presence,” said Kush.

Kush met Faisal in 2010, as a patient in a South Delhi hospital where he was employed as a junior doctor.

“Knowing that he is a Muslim and also a social worker intrigued me. Till then, I used to think that all Muslims are fundamentalists when it comes to their religion and they do not listen to any other point of view, they never open up to other communities. Then I heard him talking about making an effort to revive a pre-independence organisation that promoted communal harmony. He seemed more interested in talking about social issues than religious ones. I felt I have to know this man better,” remembered Kush.

The organisation that Faisal was trying to revive was Khudai Khidmatgar, a social organisation started by Khan Abdul Ghaffar Khan, known to many as Bacha Khan or  Frontier Gandhi, based on the non-violence propagated by Mahatma Gandhi. The organisation, which played an important role in the freedom struggle in the North West Frontier Province, died a sad death after partition.

Kush said residing among Muslims made him increasingly conscious of certain things the majority community never do. “For instance, sweets are distributed in my office during Diwali, like every other office. Though there are a substantial number of Muslim employees in my office, sweets are never distributed during Eid. I began doing it and it is now an office ritual.”

Faisal wants to extend their “social experiment”. “We are looking for a bigger place where at least 15 people can stay together. In three months, we will be inviting people from both communities to live together under the same roof for at least a week and try to know each other,” he said.  (Excerpted from a report by Sangeeta Barooah Pisharoty in the thewire.in)