Ranchi: Minhaj Ansari,22, fainted due to torture in police custody in Jamtara on 3 Oct. This Muslim youth had not slaughtered cow, nor did he consume or store beef. His ‘crime’ was that he allegedly shared an image of a slaughtered cow on whatsapp. He was picked up and brutally tortured by the police in Jamtara district of Jharkhand. The controversial Whatsapp image made rounds on 2nd Oct in Dighari village. Ansari was picked next day and lodged at the Narayanpura police station where he was tortured. When his condition deteriorated he was sent to Dhanbad Medical College & Hospital and from there he was shifted to the Rajendra Institute of Medical Sciences (RIMS) in Ranchi on 7 Oct. Ansari, who ran a mobile repair shop in Kolkata, died at RIMS on 9 Oct. 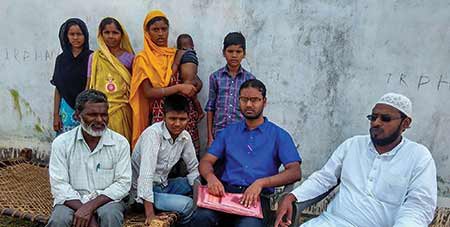 “They savagely beat my son. When he fainted, they poured water on him to make him conscious. When he didn’t the officer took my son in his vehicle to Narayanpur govt hospital. The doctor at govt hospital checked my son and told the officer that his condition is very serious and he should be immediately taken to a big hospital,” she further said. “Then the officer and the villager took my son to Dhanbad Medical College...When I enquired with the doctor, he told me that my son was so brutally beaten that he got internal injuries and he is in coma and his condition is very serious and nothing could be said about his survival,” wrote Bibi in the FIR.

Acting on the FIR, officer-in-charge of Narayanpur police station, Harish Pathak, was first suspended and a case of attempt to murder and outraging the modesty of a woman was registered against him. After Ansari’s death on 9th Oct, the attempt to murder charge was changed to a murder charge. After his death, the district administration has ordered a joint inquiry by the Sub Divisional Officer and Sub Divisional Police Officer. The state government of BJP has given a compensation of Rs 2 lakh to the victim’s family. The funeral prayer for Minhaj Ansari was conducted at his village on 10 October and he was buried at the local graveyard. Minhaj had come home on vacat zion. He is survived by young wife and a one-year-old son.

The post-mortem report of Minhaj Ansari has substantiated the allegations of his family that he was brutally assaulted in the police station in Jamtara district and he died due to the custodial torture. The injuries were “caused by hard and blunt substance,” said the post-mortem report. The report further says that the “cause of death is haemorrhage and shock.”