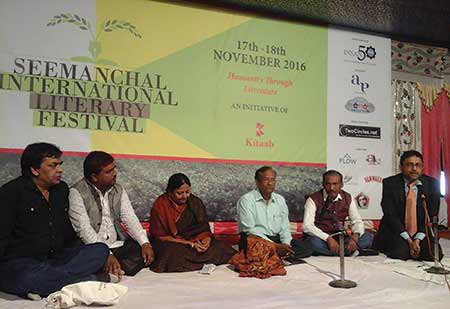 Seemanchal comprises of Kishanganj, Araria, Purnea and Katihar districts. An extremely neglected area in Bihar, it boasts of remarkable achievements including being the birthplace of the famous Hindi writer Phaneshwar Nath Renu. The region’s diverse ethos is vivid in people’s lifestyles. They profess many faiths, speak several languages or dialects and maintain unity in diversity.

SILF was the brainchild of Singapore-based journalist, author and publisher Zafar H. Anjum who hails from Kishanganj. Located in the lap of country’s chicken-neck adjoining the queen of hills, Darjeeling, at Bihar-Bengal intersection and close to Bangladesh and Nepal borders, Kishanganj connects Northeastern Indian states with the rest of the country.

Held in collaboration with Kitaab International, Singapore and Insan School Kishanganj, SILF was a first of its kind in an area which has not seen such literary events earlier. Distinguished literati from various parts of the world spoke their minds on this occasion.

The inaugural session, held at Insan School, was inaugurated by the Bihar Minister of Culture, Arts and Youth Development,  Chandra Ram. Insan School Foundation’s Saba Syed Hafeez welcomed the guests. PN Balji spoke on Indians abroad with a Singaporean perspective. Panel discussion followed on reclaiming humanity through literature with Rahman Abbas, Isa Kamari, Shafey Kidwai and Ziya Us Salam as participants. Writer and journalist Anant spoke on the life and works of Phanishwar Nath Renu, the pride of Seemanchal. Professor Kamalanand Jha spoke on opportunities and challenges in the contemporary Hindi literature. Professor Shafey Kidwai spoke in the panel discussion on challenges and difficulties of writing Urdu fiction.