March in Nanded for Muslim Reservation 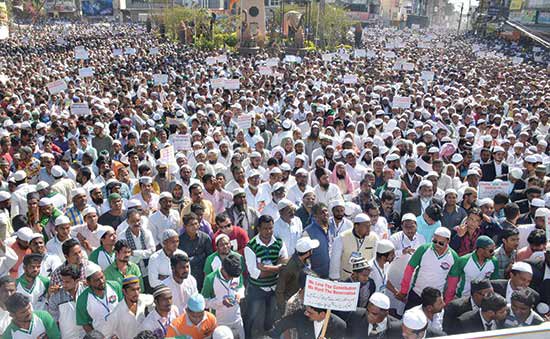 Only one national flag mounted on an open jeep was heading the protest. This is the first time in the history of Maharashtra that women registered massive participation in a protest march. All the stakeholders of the community from religions scholars, lawyers, teachers, students, medical practitioner, businessmen and engineers were present at the protest.

The first demand was for ten per cent reservation for Muslims, protection of Muslim Personal Laws, stop attacks on Muslims and Dalits in the name of Gauraksha, stop targetting innocent Muslims in the name of terror, award death sentence to the culprits of rape and murder cases from Khairlanji to Kopardi including the recent rape and murder cases in Haryana, implement Swaminathan Aayog’s recommendations without touching the quota of OBCs, reservation to the Maratha community in Maharashtra.

Political leaders from different political parties participated in the protest. Many SC/ST/OBC and Maratha organizations extended their full support in favour of the demands of this protest.

Speeches were delivered only by girl and boy students of the Muslim community reflecting the plight and sufferings of the community in recent times. Student speakers highlighted how Muslim religious and political leaders sacrificed their lives for the freedom movement of the country. One of the students criticized the government for ineffectively handling the issues of Muslim reservation and the biased targeting of Muslims and Dalit community in the country.