New Delhi: A major attempt was made here at the Ram Lila ground on 27 November when Dalits, Muslims and Adivasis came together in a show of unity to press for their rights and demands. Called, “Mahasangram Rally”, it attracted about 50,000 people who vowed to continue their unified struggle against the communal and divisive forces in the country. Hundreds of social, cultural and faith-based organisations jointly organised the rally which urged the strict implementation of the Constitution and safeguard its spirit of secularism, representation and  the rights of Dalits, Minorties and Adivasis. Leaders and representatives of Dalits, Adivasis and Minorities coming from 23 states and Union Territories, including the NE region of the country felt that the current policies, including de-monetization, are affecting hard-working communities of Dalits, Adivasis and Minorities adversely. Speakers at the MahaSangram Rally expressed their serious concern over the promotion of a socio-cultural paradigm jeopardising constitutional rights of enjoying fundamental freedoms of food, faith and livelihood. The leaders highlighted the increased atrocities, violence and judicial pronouncements questioning the constitutional rights of Dalits, Adivasis and Minorities making them insecure and deserve urgent attention of the Government. 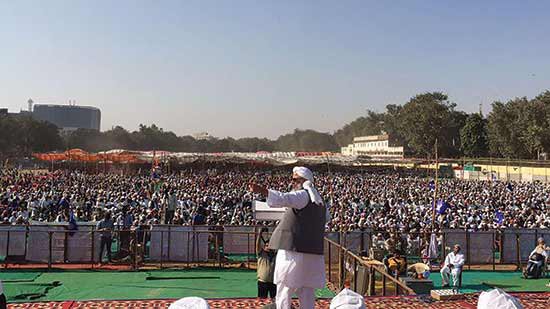 Maulana Mahmood Madani, General Secretary of Jamiat Ulama-e Hind, said the freedom of India has yet to bring equality and development to Dalits, Adivasi and Minorities. Changing rulers is not enough, the character has to be changed, he said adding that change will start from our ownselves. He stressed the need for unity of Dalits and Muslims  to defend the dignity and rights of the most vulnerable groups in the country. Mr. Ashok Bharti, Dalit leader and Founding Chairman of National Confederation of Dalit Organisations (NACDOR) led the MahaSangram Rally challenging the casteist and communnal forces which are oppressing the Dalit, Muslim and Adivasi communities. The rally demanded population-proportionate allocation of budgets to Dalits, Adivasi and Minorities and representation in all constitutional and public institutions, annihilation of caste system and caste based discrimination and exclusion, speedy and unbiased justice to the victims of caste and communal violence, truthful implementation of Prevention of Atrocities against SC/ST Act. Strict action  was demanded against the so called cow-vigilante groups which are unleashing violence  on Dalits and Muslims.