New Delhi: A mammoth conference was held here at the Aiwan-e-Ghalib on 3 December. Attended by leading Muslim scholars and intellectuals, it called for the protection of Muslim Personal Laws in India. Speakers said that religious rights of the Muslim community are guaranteed by the Constitution’s Art. 25. No government or court has the right to change or abrogate these laws. 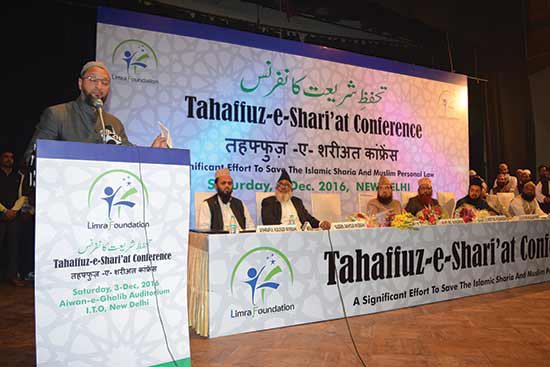 Leading scholar Allama Yasin Akhtar Misbahi said the issue of Talaq has been created as a result of a decision of the Supreme Court. He said there are some organisations which want to confuse Muslims. The same organisations have no qualms about instigating riots and killing Muslims. Yet, today they are claiming to be sympathisers of Muslims. Among Muslims too there are people who have nothing to do with Islam in their personal lives, but they are shouting to change the Muslim Personal Laws. He said, divorce and polygamy are much more prevalent in other communities but these people are not concerned about those realities. He said, we are trying through this conference to send a message to the government that we will not tolerate any change in the Islamic Shariat.

Barrister Asaduddin Owaisi, leader of the Majlis Ittehadul Muslimeen, said that the Prime Minister’s 56” chest is suddenly gripped with pain for Muslim women and he wants to ensure “justice” to them. He said, if Mr. Modi has real pain for the Muslim community, he should hear the cries of the mother of Najib of JNU who disappeared 50 days ago, or of Zakia Jafri whose husband was cut to pieces in front of her own eyes during the 2002 Gujarat riots when Mr Modi was the chief minister of Gujarat. He said, Muslims of UP demand a share for Muslim women in agricultural lands. Will Mr. Modi ensure this right of Muslim women in UP? He said the only aim of the BJP government by raking up talaq and uniform civil code issues is to polarise society and gain Hindu votes.