Unfortunately, little importance is given to spirit of the Indian Constitution by the very elementswho claim to be extremely nationalistic and spare little concern for their own “patriotism” while aggressively targeting others. Yes, patriotism as well as nationalism does not imply that those espousing their love for the country have the authority to take law into their own hands. But this is what the violent behaviour of Akhil Bharatiya Vidyarthi Parishad (ABVP) members at Delhi University’s Ram Jas College indicates. If a college decides to host a certain programme, what right do ABVP members have to stop it from doing so? After all, ABVP is not a constitutional body which can dictate its terms when it decides and over whomever it wishes. 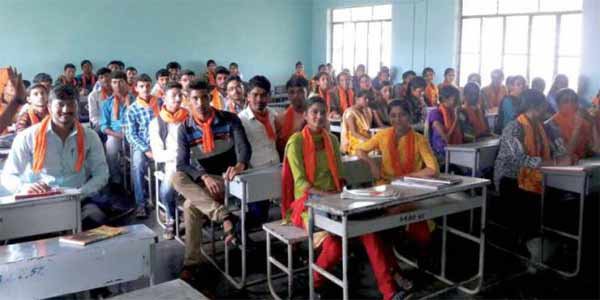 Most are well aware of which political wings, the ABVP is associated with. Ever since, these have attained power at the centre, it seems ABVP seems to be guided by the feeling that it has the authority to impose its will as it feels like. Well, this impression apparently prompted ABVP to display its aggressive behaviour, indulging in violence, damaging property and injuring numerous persons at the place. India is a democratic nation, where within the bounds of legal parameters, each person and/or group has the right to express opinion. What was wrong if Ram Jas College had decided to invite Umar Khalid to give a talk? Besides, the college had decided not to hold the programme after apparently learning about the intentions of ABVP. It may be noted, ABVP indulged in violent behaviour against a programme that was not held.

This only suggests that the members of ABVP were directed by higher authorities of their organisation and those associated with them to display such aggressive behaviour. They gave little importance to their activities being in violation of the Indian law. What apparently carried greater weight for them was pleasing their higher authorities. Sadly, little importance was given to constitutional dictates according to which such behaviour is not allowed. Unfortunately, groups like ABVP are often not restrained adequately by those who are legally bound to provide security and take action against those indulging in illegal behaviour. This apparently has encouraged such groups further to disrupt peace as and when they wish to.

The same group and their associates have ignored the basic principles of the Indian Constitution, which lay stress on democracy. Whatever reservations, they may have had about Khalid’s talk, they could have been expressed vocally, without indulging in violent action. But had they acted in a civilised manner, they would not have probably earned substantial media attention and would not have pleased their higher authorities. They have apparently ignored the fact that this is hardly in keeping with nationalism and patriotism that each Indian civilian is expected to be bound by. How can violation of basic principles of the Indian Constitution be viewed as a patriotic or nationalist activity? Yet, the same elements exercise little restraint in questioning patriotism and nationalism of peace-leaving Indian citizens.

Democracy as well as the legal system demand that needed action should be taken against such elements. Besides, if the concerned authorities choose to close their eyes against their violent behaviour it would be equivalent to encouraging them to indulge similarly as and when they please to. Now, what would this suggest? Should colleges and other educational institutions give greater importance to what they are expected to or to what ABVP and their associates decide? This would be equivalent to democracy of majority being subject to violent designs of a few.

Of late, Delhi University’s prestigious college St. Stephen’s has also been caught in a crisis. This refers to the College Principal’s move to become autonomous and be free of the government control. Certainly, the central government is desirous of colleges seeking autonomy. This would end the financial assistance given to these colleges from the government. The recent past has undoubtedly been witness to an increase in the numbers of private colleges. But fees at these private colleges are extremely high in comparison to that at colleges which are financially assisted by the government. If each college becomes autonomous and free, naturally their fees too would be raised. It would have to raise funds to function from its quarters. College education would then become too expensive for the majority of Indians.

At present, strong opposition from faculty and students of St. Stephen’s College has compelled the Principal to stall his desire of moving towards autonomy. He has agreed not to move ahead without the consent of the faculty and support of the majority. Colleges of Delhi University are not in favour of autonomy. If the central government was not interested in this move, the issue would not have reached this stage. Tragically, little importance has been given to it spelling financial problems for those seeking higher education. Threatened by the danger it spells for millions’ democratic right to education, many have chosen to protest against it democratically before it is too late!