Baaras, Jammu & Kashmir: April 13 changed the life of this 27-year-old shawl-weaver forever. As he speaks, one could find his eyes haggard and features livid. His hands continuously gasp the arm of his aged mother as the bruises of the day when he was strapped to the front of the army jeep continue to haunt him. 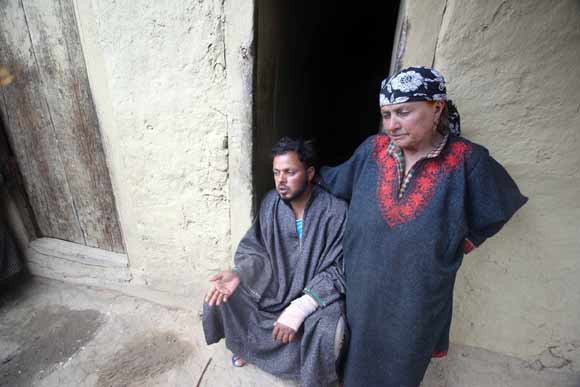 In a single-story mud dwelling located in central Kashmir’s far-off hamlet, Chil Bras, Khansaheb, Farooq Dar has little idea about him becoming a household name in Kashmir and outside. He doesn’t know how to use facebook and has no idea what it means for a video to become viral.  According to him, he would have been today an unheard victim of violence, had somebody not shot his plight on a mobile phone.

On April 13, a short video clip in which a man was seen strapped to a moving army jeep, allegedly as a human shield against stone-pelting, went viral on social media, turned Kashmir into an inferno, forcing the authorities and the Army to investigate the matter.

For Dar’s 73-year-old mother, Fazi, the incident has devastated her son within and she hopes that Dar would one day turn as normal as he was in the morning of April 13. “He was hilarious sometimes and now I wonder whether he is dead or alive. He has started asking me bizarre questions like where is he and what he does,” Fazi told Milli Gazette in a cracked voice.

As Dar recollects the ordeal he witnessed on the polling day and narrates everything in perfect sequence, one could find the developing symptoms of severe trauma taking toll within this young man. His hands tremble as he speaks in a low tone making it difficult for a listener to understand what he mutters. “I was on a bike at 9.30 am on April 13 when army caught hold of me and started thrashing me with utmost brutality. I was yet to understand the reason behind such an action that ropes were brought and I was tied on the bonnet of an army jeep,” says Dar.

The army, according to Dar, paraded him to some nine villages of Budgam, a central Kashmir district.  “For the entire day, I was being paraded from one area to another. The army man in the back of the jeep to which I was tied, was speaking through a loud speaker and was warning people of similar fate if they pelted stones. I was told either to get shot or remain silent. I preferred the latter.”

“As I was being paraded, severe pain struck my limbs and my shoulders. It was because I was beaten to pulp before being tied to a jeep. In a fumbling voice, I kept begging for water but got nothing. The army took a lunch break at noon. They had lunch but I was there, tied in ropes and still begging for water," recalls Dar. 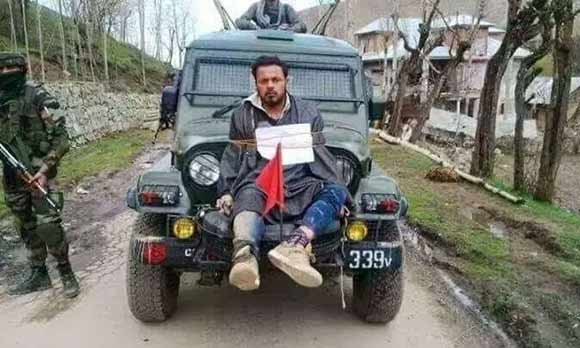 He was later brought to one of the CRPF camps at Arizal, Budgam. Here again, according to Dar, he was ruthlessly beaten before being tied with ropes to a wooden chair. “The moment for me was such that I felt neither dead nor alive. I lost all my senses of being human and kept wondering where have I come and from where. When the Sarpanch (village head) came for my rescue in the evening, I was made to sign some strange documents written in Hindi language. I know little Urdu but no Hindi. I don’t know what they made me sign before setting me free.”

This shawl-weaver knows no work except carving aesthetic designs on hand-made Kashmiri shawls. Therefore, two days ago, in a bid to sustain livelihood, he strived to resume his work. However, his hands started shivering in a convulsive twitch as he delicately tried to hold a needle to design the rug.

Dar’s mother says her son hasn’t been able to sleep since the day he witnessed the forces’ wrath. “All he does all the time is to stare at walls and at each person who visits our home to enquire about him,” says Dar’s mother, Fazi Begum.