Zafarul-Islam Khan 04 Mar 2018
Today is Syed Shahabuddin's first death anniversary. This article was written in December, 2011 and is part of a book on Syed Shahabuddin compiled by Mushtaque Madni available from Pharos Media. The author had known him and worked with him for close to 16 years.

I returned to India in 1984 after spending 18 years in the Middle East and UK. While abroad, I remained in touch with the developments back home. While in Libya, where I was working as an editor in the information department of the Libyan Foreign Ministry, we used to receive newspapers from different parts of the world including the Subcontinent. I also subscribed to some Indian journals and newspapers that could keep me abreast of the happenings in India, especially about Muslim affairs. During those days, I first read about Syed Shahabuddin and also about his involvement in the community affairs and that despite being a successful diplomat serving in many countries, he took voluntary retirement only to get involved in public life. 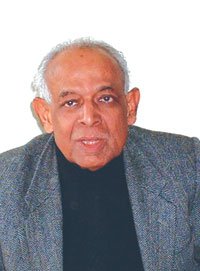 Though I was well-ensconced in my job in Libya and also later in London where I even owned a house of my own, there was a nagging urge to go back to the country I belonged to and devote myself to the uplift of my country and community. Those days Syed Shahabuddin had become a household name, thanks to his candid statements and activities. His active involvement in the Babri Masjid and the Shah Bano case, in which he played a pivotal role, furthered his popularity in the Muslim community. I for one, despite my deep regard for a person of his calibre, often felt that he was crossing the limits that a member of a minority community should not.

When the Babri Masjid was demolished in the very presence of the security forces in December 1992, I wrote an article that was carried by the Arab News. I also sent a copy to Radiance, Delhi, which also carried it. The article had a sincere suggestion that with the demolition of the Babri Mosque, a shameful manifestation of the majority’s unconstitutional might, the politics of Syed Shahabuddin came to an end and that it is high time he said good-bye to active politics. Soon after the publication of my article, Syed Shahabuddin wrote a letter to Radiance expressing his disappointment and saying that he hoped that this was not the opinion of Radiance. This was our first indirect encounter through a magazine while none of us knew each other personally.

Since those days, besides some other foreign publications, I was also working for Arab News, I once called him up to seek his opinion about some issue related to the Babri. He flatly refused, saying that he does not give interviews over the phone. That was our second, this time direct encounter though we didn’t see each other face to face.

In July 2000, Muslim Majlis-e Mushawarat split into two factions, the bigger one was led by Syed Shahabuddin. Incidentally, in the beginning of the same year we had launched The Milli Gazette and we reported this development in the issue of the second half of July and later followed it up with an interview with Syed Shahabuddin which resulted in a rejoinder by the other faction which too was promptly published. One of those days, while I was working in my office, I received an unexpected phone call. The caller introduced himself as ‘Syed Shahabuddin’ and after initial pleasantries, invited me to join the Mushwarat as a member of the Markazi Majlis. I welcomed the invitation and agreed to join the Mushawarat which I did soon after.

It was since that day that we came close to working on a common platform that was fully committed to the community’s welfare and its various issues. It was my privilege that I got plenty of opportunities to watch him from close quarters in conferences, seminars, Mushawarat meetings and even while travelling with him to Kanpur and Kashmir etc. I felt that he was not only an extraordinary and uncompromising leader but was also a great human being who literally lives and practices the values that he preaches. I felt that he was deeply committed towards the all-round development and well-being of the Muslim community and devoted himself fully to that end. Particularly, in Kashmir, while we were staying in the same room in a guest house, I saw that he, despite Kashmir’s chilling cold, woke up early in the morning to offer Fajr prayer followed by the recitation from a small-sized copy of the Holy Quran which he said was gifted to him by his in-laws at the time of his marriage.

One more rare thing in him that I observed closely was that besides being virtually a staunch and a hard-core Muslim and a forceful advocate of Muslim causes, he is a patriot and a nationalist to the core. For him, the Constitution of India is like a Bible that must be followed strictly by all, Muslims and non-Muslims. In this matter, he is never ready to accommodate sentiments of people swayed by emotional concerns, however genuine, who would like to take an unconstitutional line.

Syed Shahabuddin is a strict constitutionalist and strongly believes that in spite of fascist forces’ evil designs against Muslims, the Constitution is capable of addressing and solving Muslims’ problems.

He led Mushwarat for many years before and after 2002, and submitted its reports and resolutions to the government while attacking fiercely, yet safeguarding the higher interests of the nation, ineffective governmental on-paper policies towards the Muslim community. Unlike traditional leaders, he never exceeded the boundaries drawn by the Constitution and always advised us to do the same.

During the last few years, Syed Shahabuddin focused almost entirely on the Muslim reservation issue. Earlier, interestingly though, he too believed like armchair Muslim intellectuals and thinkers that it was education and competitive spirit that could bring about the overall development of the Muslim community. But with the passage of time, he realized that it was almost impossible for the downtrodden, neck-deep in the ups and downs of life, to send their wards even to government schools, let alone enabling them to compete with the most competent and well-fed students. What we call in Urdu, aazmaish-e-naan-o-noon (the hardships of bread and butter) glaringly manifests itself in the lives of a majority of Muslims who live below poverty line panting for mere survival. Reservation is the only way to uplift these backward classes. He understood this and strove tooth and nail to convince the government to initiate the process of Muslim reservation by openly accepting the Mishra Commission recommendations. He conducted meetings in various parts of the country enlightening Muslims about the concept and necessity of reservation for the deserving classes and that it was in no way against the egalitarian concept of Islam. That is why, today, not only the government but many secular parties have also endorsed the Muslim reservation which was almost a taboo ten years ago.

As for his journalistic capabilities and commitment, I have not come across a single person in my entire life who's so dedicatedly focussed on issues he chooses to tackle in his writing. He wields a formidable and convincing pen. Syed Shahabuddin’s writings can’t be considered merely journalistic. His articles are always beyond the traditional journalism and could be called well-argued research papers which deserve to be preserved for the posterity and future reference. In short, he belies Dr Matthew Arnold's (1822-1888) definition of journalism as 'literature in a hurry.' Syed Shahbuddin's writings can be called 'literature for the posterity' because of their insightful depth, wealth of information and comprehensive ambit. His comprehension of the issues is all-embracing and he seems to be blessed with rare acumen and clarity of mind. And this sharpness often comes from diplomatic, legal and parliamentary experience. He studies carefully and collects relevant data before writing anything. That's the reason his write-ups are sharp and crisp if longish. And this quality alone, apart from his many fine and laudable traits, makes him a personality that towers above his contemporaries.

(An English-Arabic writer and journalist, the writer is the editor of The Milli Gazette, Delhi, and a milli and human rights activist)