Under the banner Sudarshan TV a event titled “Bharat Bachao Yatra” was organised in Nanded wherein they wanted to tell the public about the need for a population control act to control the problem of growing population of India. But as anyone can suspect, RSS and its associates, were more interested in talking about the population of a certain a community. 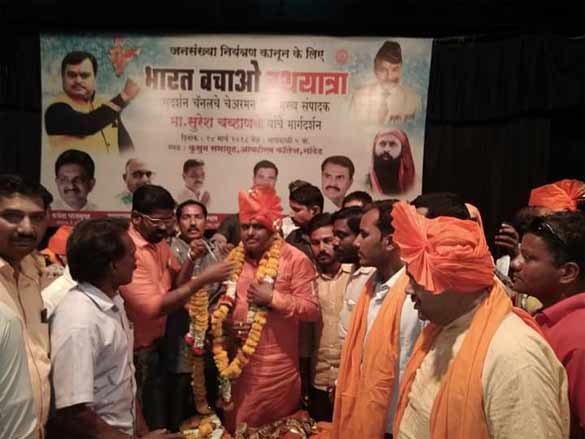 The program was organized on 14th March 2018 at Kusum SabhaGruh auditorium which owned by Congress leader and former CM of Maharashtra Ashok Chavan’s family. The main organiser of programme was Rupesh Padmukh, a strong supporter of Ashok Chavan, who used to every year organise programs in the memory of late Shankarrao B. Chavan and his wife Kusum Tai, in whose name the auditorium in question is. The photographs of Rupesh Padmukh are available in public spaces with Ashok Chavan, with his wife MLA Amita Chavan and his brother Narendra Chavan.

The other organizer was Subhash Deshmukh Chikalekar, who calls himself ex-organiser (संघटक) of Nanded City Congress committee, a staunch supporter of Ashok Chavan. He frequently posts on social media about Ashok Chavan, praising him and his photo with Ashok Chavan is the display picture of his current Facebook profile.

The other organiser who mobilised public to attend this program was Ganesh Kokulwar, a Bajrang Dal activist and VHP's city president, who is the brother of newly elected Congress Corporator Nagesh Kokulwar, who publically invited public for this event.

The main speaker of the event, editor of Sudarshan TV, Suresh Chavhanke praised Congress’ Shankarrao B. Chavan, the then home minister of India when Babri Masjid was demolished in 1992. He said that Shankarrao Chavan proved that without going for Karseva, how a Hindu can help the cause by his inaction. He also praised Shankarrao’s son Ashok Chavan for providing the auditorium for this program.

As expected his speech full of abusive language for Muslims and referring them as Pakistanis. He said population of Muslims is increasing because of they keep 4 wives and have 40 children and they are trying to make Pakistan in every part of India.

He quoted false figures of Muslim population to provoke Hindus against Muslims and to fan communal tension for his vested political gains. With his incorrect data, he asked Hindus to become serious about the hike in Muslim population. To end his speech he requested Ashok Chavan that whenever a situation arises in future, where he (and his supporters) will be killing the “enemies” of the nation, Ashok should forget that he is a Congress leader, that he should not look towards Sonia Gandhi or Rahul Gandhi, but ignore all the violence like his father, Shankarrao Chavan, who remained silent when Babri Masjid was demolished and riots spread all over India, even though Shankarrao Chavan was the then Home Minister at the centre.

The secular people of India should not be worried at the anti-Muslim inflammatory remarks at this program as this is business as usual for members of the Sangh parivar. But its extremely worrisome that Congress is shifting more and more from soft Hindutva towards hard core Hindutva ideology trying to compete with Modi, Amit Shah, BJP and the RSS combine.

Till the filing of this report two FIRs have been registered, one in Umarkhed Tehsil and and another in Nanded city by member's of Asaduddin Owaisi’s AIMIM. But no one from the Congress has condemned this disgraceful association with such a communal program. There are 22 Muslim corporators recently elected in Nanded City Municipal Corporation. The same Congress was quick to jump the gun and condemn Zakir Naik.

It may also be noted that Jamiat Ulama-e-Hind and other socio-religious Muslim organisations have restrained themselves from speaking against such hate mongering.

Ubaid Bahussain is a Nanded-based political activist, earlier associated with Aam Aadmi Party but left it after AAP’s silence on the growing violence against Muslims in the name of Gau raksha.