New Delhi: The Hindi and Urdu translations of “Gujarat Behind The Curtain” by the former Additional Director General of Police Gujarat, R.B. Sreekumar, IPS (retd) was released here at the Indian Women Press Club in the presence of a large contingent of intellectuals and print and electronic media journalists. The Urdu translation is titled “Gujarat pas-e parda” while the Hindi translation is titlted “Gujarat parde ke peeche”.


Release of the books

Introducing the book and the author, Masoom Moradabadi said that this is the most authentic work of documentary nature on the Gujarat 2002 pogrom. Its importance stems from the fact that the author held a top post in the Gujarat Police at the time as he was the additional director general of police (intelligence) of the state of Gujarat during the crucial period when the pogroms occurred and lingered for months. At the time, he had repeatedly alerted the Gujarat government in writing about the events and their repercussions. He later presented a number of memorandums to the Nanavati Commission which was charged with probing the 2002 events. His alerts and memorandums showed clearly that the 2002 Gujarat riots were preplanned. He said the English edition of this book was published a few years back but somehow it was suppressed, so much so that people are generally unaware about this important book. Now it is hoped that through the Hindi and Urdu editions, this book will reach far and wide.

Speaking as the publisher, Dr Zafarul-Islam Khan said that Pharos Media has been around for the last 22 years during which it has published around a hundred titles in English, Urdu, Hindi, Gujarati and Arabic. It has published books on burning issues of the time in various languages so that correct perspectives are placed before the readers and preserved for the posterity. He said Pharos Media has published many books on the terrorism narrative in the country including the best-seller “Who Killed Karkare?” which is now available in eight languages of the country. About the current book, he said Pharos Media will soon publish its English edition also, so that this important and documentary book is available without difficulty in India and abroad.

Ovais Sultan Khan congratulated the author that, despite occupying an important post, he took cudgels with the rulers of the day and suffered as a result. He is active even now in his retirements days, fighting for justice and rule of law. He said, a person like Raghvan, who was wanted for questioning in the Rajiv Gandhi murder case, was asked to probe Gujarat riots and now for his services has been appointed as an ambassador in a foreign country.

Humra Quraishi said she had read this book long ago in its English version. She said, this book proves that riots do not occur by themselves but are planned and executed on purpose. She said, Sreekumar is a brave man who suffered while raising his voice for justice. He also suffered the consequence of his bravery. In comparison, Vanjara sided with the rulers and despite all his crimes, he is a free man today. 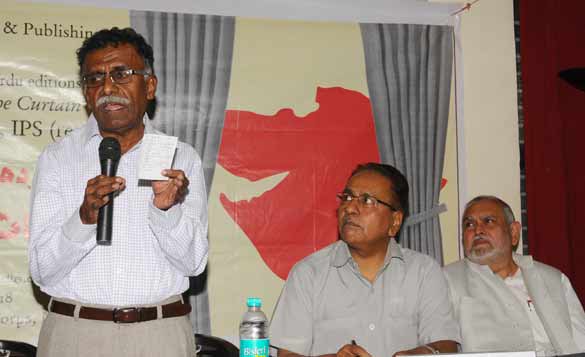 Sreekumar, the author, said this book is his seventh attempt to ensure the supremacy of law. He said Modi had told officers in the evening of 27 February that “the anger of Hindus will wane in three days, do not interfere until then.” He said if the Standard Operations Procedure of Police is adhered to, no riot can take place.  He said Police is very corrupt and, as an example, said the average income of every police station in Ahmedabad during his time in Gujarat police was Rs 25 lakh a month. He said Modi and BJP succeeded and gained strength due to the soft Hindutva policy of the Congress Party.

Sreekumar said, flouting of law started at the Godhra railway station itself when bodies of the victims of the fire in S6 coach were handed over to the VHP on 27 February in clear violation of law which says that a body may be handed over only to the legal heir of a deceased person. VHP transported these bodies in a demonstration parading them all the way to Ahmedabad and thereby created the environment required for igniting the riots. He said the Rambhaktas coming from Faizabad were misbehaving with travellers, people and vendors on stations all the way. They did this on Godhra station also where they did not pay vendors for items bought on the station. They even tried to abduct a Muslim girl and take her forcibly inside the coach. He said, as customary, police informers were accompanying Rambhaktas all the way from Faizabad and were regularly giving information to the Police in Ahmedabad. He said fire did not start in Coach 6 while the train was on the Godhra station but when it had departed from there. The reason was that the Rambhaktas had misbehaved with people and vendors on Godhra station and had tried to abduct a Muslim girl. People living in the nearby areas came to know of this and pelted the train with stones. He said, it is not known until now how the fire started and who was responsible.  He said there were some passengers who had booked their journey in that coach, their details are with the railway department, they survived but they were never questioned. Sreekumar said it is a standard police procedure to reconstruct a crime in order to know how it actually happened but in the case of Godhra fire, this was never done.  He also disclosed that the word “conspiracy” for the Godhra incident was an after-thought and it appeared in the police case diary only 15 days after the incident.


Covers of the two editions 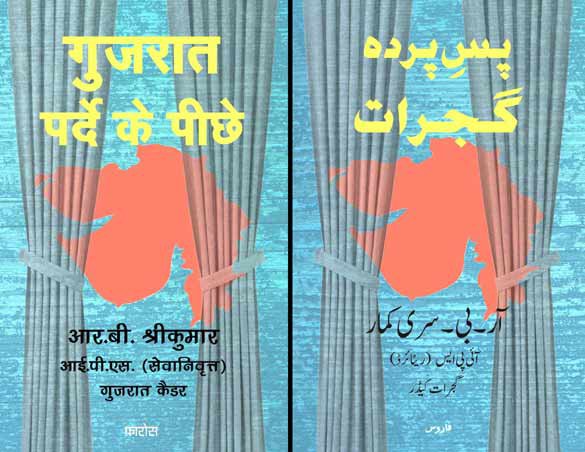 Replying to a journalist’s question as to what is the benefit of publishing such a book after so many years of the incident, Dr Zafarul-Islam Khan, the publisher, said that our aim is to preserve the true history for the generations to come and to ensure that those responsible for such ghastly incidents are forever naked in front of the mirror of history. Another reason, he said, is that there is always a possibility that after the change of government such cases will be reopened and then such documentary works will be very useful.