“Cow vigilante groups are active on Rohtak-Sonipat Highway for some time now. They often snatch money or ask for bribe form he vehicles carrying animals,” said people from nearby villages. 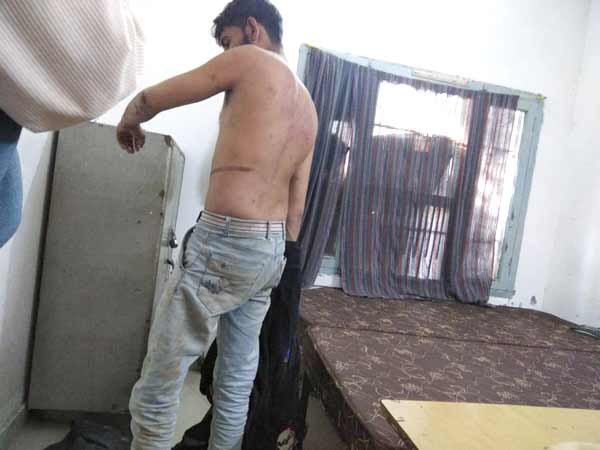 For the last ten years 24-years-old Naushad has been working for a cattle trader and dairy owner Sunil in village Dhoki near Charkhi Dadri. On 19 January 2019 he and his co-workers (Mehboob and Iqbal) loaded a buffalo and three buffalo calves in a pickup. They were heading to sell them in animal fare held in Baghpat (Uttar Pradesh). On their way their vehicle was checked at two police check posts and they were handed over receipts for the same.


Cow Rakshaks take law into their hands and stop vehicles 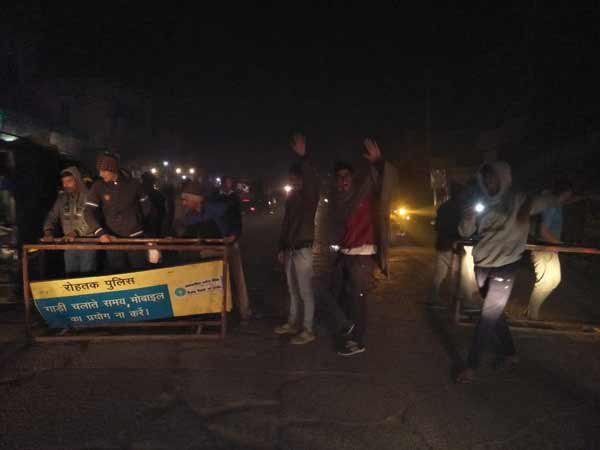 Around 8:00 pm, they approached village Bhalout of Rohtak district in Haryana, where they were stopped by heavily-drunk cow vigilante Jashpal Gumana who said that there are cows in the vehicle. Naushad replied that there aren’t any cows in the vehicle and if he wanted he can check himself. Gumana refused to look inside the vehicle and started shouting “cow smugglers, cow smugglers!” to gather people. He forced Naushad to get down form the vehicle. Youth started gathering at the place with sticks. Meanwhile Naushad’s co-workers, Mehboob and Iqbal, ran away with the vehicle to save their lives.

Gumana snatched around Rs 2000 and motorbike keys from Naushad’s pocket. Thereafter, they stripped him and started thrashing him furiously. He was slapped, kicked and dragged on the road. They tied him to a pole and tortured victim for almost two hours. They burnt his skin and lips etc using beedi and thrashed him till he fell unconscious. Thereafter, they sprinkled water on his face and continued thrashing and abusing him mercilessly. 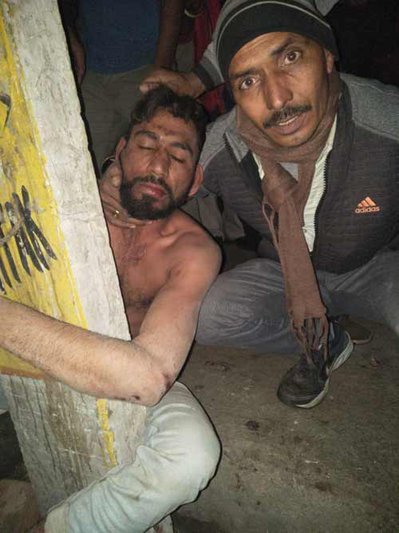 Naushad being thrashed on the road

Mehboob and Iqbal, who had run away with the vehicle, dialled No. 100 repeatedly till their call was answered. The person manning the police helpline gave them the telephone number of the nearby police station. They called that police station seeking help. Finally, police reached the village, untied Naushad from the pole while he was still being thrashed.

The police party took Naushad to the Sadar thana in Rohtak. He was in immense pain and was bleeding from his nose, ear, legs and back. He pleaded with police for the medical help but the policemen gave him only some tablet with tea. He was then handcuffed and made to sit on the cold floor with no medical help. Sunil, the dairy owner, rushed to the police station and offered him food and a kurta (shirt). The mob continued to threaten Naushad even inside the police station.

Next day, civil society groups read about the incident and decided to visit the police station without any delay. Rajkumari Dhaiya, distt president of the All India Progressive Women’s Association, Preet Singh, district president of Kisan Sabha, Com. Prakash form CITU, Kamlesh Ladli Vijendra Batyana and Adv. Attar Singh Hudda, reached Sadar thana and took details of the incident. When they met ASI Balkishan, they were shocked to see the severely injured Naushad handcuffed and chained to bed. They saw that while half-conscious Naushad was sitting on the cold floor, the main accused, Gumana, was sitting on a chair having tea with the policemen.

Civil society groups questioned police why the injured Naushad was made to spend the entire night on the cold floor while hand-cuffed as if he is a dangerous and wanted criminal or terrorist. “We handcuffed and chained him thinking he might run away,” claimed the policemen. However, the fact is that the victim could hardly walk at the time. Also, he was in immense pain. The delegation asked policemen to take him for medical checkup and treatment. Naushad was taken to PHC in village Kiloi only in the evening of 20 January after persistent reminders by the civil society group. There too he was given only a tablet. Proper medical attention was not given and medical checkup was not done. Later, Naushad was asked to leave the police station at 9 pm with instructions to re-visit the police station with the dairy owner next morning. 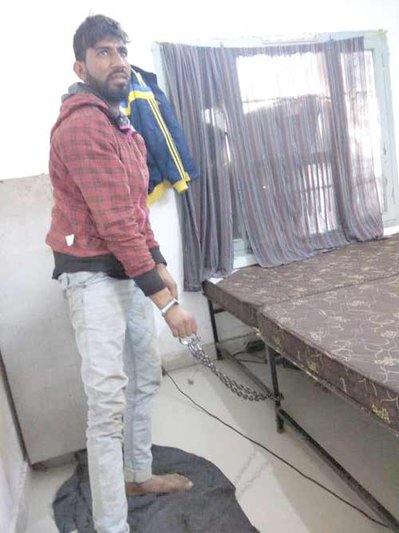 The delegation also spoke to the accused Jaspal who narrated the entire incident in front of the police. He accepted that Naushad told him that there are only buffaloes inside the vehicle. He also accepted that he stripped and dragged the victim, slapped him, tied him to the pole after which the victim was thrashed. The delegation also enquired whether he saw cows in the vehicle which he denied.

On 21 January, Naushad, Sunil, Iqbal and Mehboob met the civil society group and said that their vehicle is still in police custody. They have provided all the proofs and documents but the police says they will file a case against all of them. The delegation spoke to the SP and discussed the situation. Later they also visited the SP along with the victims. All injuries were shown to him. He assured that action will be taken against the culprits and also assured that the victims will get justice. After this an SIT was formed for the same.

Such incidents taking place just before the Lok Sabha elections are a matter of concern. It seems that initially police was under political pressure due to which they ignored the rule book. However, when the issue got highlighted the tried to act to save themselves.

On 1 February the civil society group visited the Rohtak police station again where they were told that ASI Balkishan is handling this case and he will be back in an hour. The group re-visited the police station but still there was no trace of ASI Balkishan. When a group member called over the phone, he said he will be reaching within ten minutes. When he failed to show up, the group wanted to see the SHO, only to be told that he is not available. When the group called ASI Balkishan again, he asked his staff member to share information with the group.

We were informed that FIR No. 38 has been filed against the victims for animal cruelty and for cow protection. When asked, how come charges for cow protection when there were no cows, we were told that theses charges will be removed once presented.

FIR 39 is filed against the accused under Sections 341, 342,506, 325 and IPC 34. So far three accused, Jaspal Gumana, Rinku and Amarjeet aka Kaala have been arrested and set free on bail. We were told that investigation is still on and the remaining accused will be arrested as their names appear during investigation.

Sunil said that timely intervention by civil society was of great help when everything was moving in the wrong direction. He doubted that Naushad would have been saved without such intervention. Initially, police was not even talking to the civil society group in a proper way. However, once they met SP, an SIT was formed. Naushad and Mehboob spoke with us and narrated every bit of their ordeal with fear on their faces. They thanked all who stood by them and saved their lives.