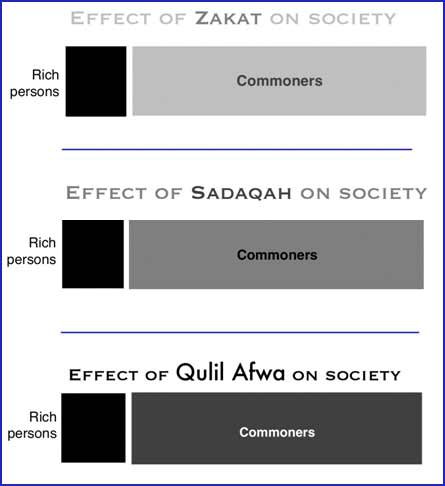 Islam's basic pillar is equality in society (Masawaat). That's one reason why Quran prescribes for circulation of wealth across the social spectrum. This is an important dimension of God's emphasis on developing a wide-angled charitable disposition. The overarching purpose is to ensure that the community's wealth does not remain confined among a few hands; rather it keeps percolating across and circulating in the societal body:

God says, what Allah has bestowed on His Messenger (and taken away) from the people of the townships- belongs to Allah - to His Messenger and to kindred and orphans, the needy and the wayfarer; in order that it may not merely make a circuit among the wealthy among you. So take what the Messenger assigns to you, and deny yourselves that which he withholds from you. And fear Allah; for Allah is strict in punishment.

The above verse lays down the fundamental code of the economic policy in Islamic societies and governments. Wealth should permeate the entire community and must not remain confined among the rich.

But, as per the Divine scheme, the instruments mentioned to ensure this are surely not confined to Zakat. If 15% of the Ummah is financially well placed then only 2.5% of their "wealth+annual savings" will not suffice to bring up the remaining 85% of the Ummah to the level of economic equality all over the community. That's the reason why God has prescribed Sadaqah. For quantifying how much Sadaqah one should give, God has mandated the following directive principle that has mostly missed the world's attention so far.

They ask you what they should spend (in God's cause and for the needy). Say: "What is left over (after you have spent on yours and your dependents' needs)."  Thus does God make clear to you His revelations, so that you may reflect.

Accordingly, after duly providing for self and family, whatever a person is left with has to be given away as Sadaqah. The comparative effect of Zakat, Sadaqa and Qulil Afwa on the society can be gauged by the matrix shown at the top.

It is thus clear that for the truest implementation of God's mandate, Muslims will have to comprehend  the concept of Qulil Afwa and practice it. Then only, the real impact of an internally coherent Muslim society will be felt by the non-Muslim world.

In conjunction with this mandate let us also mull over the following ayah where God has bracketed Riba and Charity in the same sentence even though they are diagonally opposite.

Then, God goes on to further elucidate His point as follows.

Whatever you loan to the people in usurious hope that it would return to you increased through the goods of those people, will bring no increase in God's sight. Whereas whatever you give in charity seeking God's countenance (His approval and good pleasure), for those there is increase (of recompense) multiplied.

In both these ayahs God has encouraged the human being that whenever one is having abundance of funds and feels that one can give that money as loan to others so that one earns money on money, one should remember these ayahs and change the track of one's thought process and action. Thus, leaving aside the instinct of earning more through these worldly means which God detests, one should give away excess funds in charity to the needy. There God promises that due to His kindness the money so given away in charity would come back to the donor many fold. This has been further clarified in the following ayah.

Those men and women who give alms (by spending out of their wealth in both the obligatory and supererogatory duties of alms-giving), and lend to God a goodly loan (by spending either in His cause or for the needy), it will be increased manifold to their credit; and they will have an honorable, generous reward, in addition.

4. Why Riba is forbidden

God has considered the person who earns money by lending money as spiritually dis-balanced. His greedy ego vitiates the spirit of mutual bonhomie that nurtures the sustenance of mankind. He is unmindful of individually prospering by polluting the societal bonds of mutual consideration.

On the other hand, the law of nature doesn't recognize a means of livelihood that guarantees a mandated income without harboring an element of risk. Every kind of livelihood has to be earned by incurring material expenditure as well as human labour and this has to be dovetailed with some fundamental inherent risk. The basic paradigm of normal give and take in the world is based on equal terms. Profit is earned by incurring time, labour and brains in 'producing' a commodity that is 'bought' by those who require it. There has to be the 'pain of creation'.

But, the money-lender goes on charging interest repeatedly and the quantum is ever increasing. The profit which the debtor makes on the money of the creditor, however large it may be, has after all its in-built limits, but there is no restraint on the interest the creditor may charge on his money. He may even appropriate all the earnings of the debtor and may even deprive him of his means of livelihood and his property while still having the same amount of debt against him that existed at the time of the initial borrowing. Thus Riba generates lethargy and tendency to unlawfully take over others' earnings; that leads to self-indulgence.

Apparently the money earned on money makes a person opulent while charity diminishes wealth. However, if one doesn't only physically see using his eyes but also spiritually perceives using his heart it is in fact just the opposite. Interest disjoints the society by creating mutual dislike and jealousy while charity builds mutual love and trust. It's the difference of ego-centric narrow mind versus generosity for the larger good. One breeds class struggle while the other sprouts homogeneity.

Mind you, the money-lender can even withhold his money as and when he has the slightest fear of market deterioration. He creates trepidation that can turn an exigency into a catastrophe. Thus, interest mars and cripples the national economy. Conversely, through charitable utilization of the people's riches the level of national prosperity rises and so does the GDP.

Thus, in order to implement its economic policy objective Islam has taken the following measures: Riba (usury or interest) has been forbidden. Zakat has been made obligatory. The level of Sadaqah has been raised to the extent of Qulil Afwa. Believers have been exhorted to practice voluntary charity. Different kinds of atonements in kind mandate out from the wealth turned towards ameliorating the downtrodden in the society. The law of inheritance is aimed at ensuring that the wealth left by every deceased person spreads among the largest circle of the people. Stinginess has been condemned and generosity commended as a noble moral quality. And, the well-to-do people have been told that in their wealth there is a definite share of the beggar and the indigent, which they must discharge not as charity but as the right of those people.

This brings to the fore the necessity of an Islamic society or government to organize its affairs in the following manner. The ownership and control of the material resources of the community need to be so distributed as best to subserve the common good. The operation of the economic system must not result in the concentration of wealth and means of production to the common detriment. The wealthy people should not be allowed to monopolize the means and resources of wealth.

Even though this Quranic injunction regarding circulation of wealth (59.7) is for general application in the society, we need to note that, at the time of the revelation if this ayah, the properties that were the immediate object were the homes and related possessions that had fallen to Muslims by the fleeing enemy. There's hardly a parallel in history that, post victory, these God-gifted properties were allotted to the incoming Mahajirs (emigrants). Here God expresses happiness that the Ansars (local helpers) loved those who had migrated towards them and entertained no desire in their hearts for what is given to the migrants and, rather, preferred the migrants as the recipients of the booty even though they themselves were in need. The Divine edict thus broadcast to the world is that those who are saved from the greed of their own hearts, are truly on the triumphant track.

The contextual intention of the verse is to point out that till Resurrection it is the duty of the Islamic government and the Islamic society to settle the people who are exiled and compelled to take refuge in it because of being Muslims and to enable them to stand on their feet economically.

In today's world, Muslim governments and societies are not discharging this important obligation. Tens of thousands of Muslim refugees and displaced persons (specially Rohingyas from Myanmar) need our attention but we are oblivious of their plight or at least they do not figure in our charitable calculations to the extent to which it has been mandated in the scripture.

7. Lessons we need to take

Thus, it is important that the world's materially better placed class appreciates God's purpose in creating humanity and His clear mandate regarding the reality of His own ownership of all material resources. We need to realize that some of us have only been nominated as part-time custodians of small portions of these assets and the sources of income emanating therefrom. Out of what each one of us is able to earn and procure, we are supposed to retain only that much as is sufficient to sustain us and our dependents in the family. The balance does not belong to us and has to be incurred for others who are in need. By way of implementing this broad Divine mandate, certain dos and don'ts have been prescribed. Riba, that's earning money out of lending money and thus exploiting the havenots, is forbidden; that's mostly known in today's world as usury or interest. Instead, the extra funds available should be spent as charity or at least for giving interest free benevolent loans. The concomitant theme of all economic activity should be to ensure that the community's wealth keeps on changing hands and circulating across the entire social spectrum. In the process, the Mahajirs needed to necessarily be rehabilitated with dignity. The Islamic societies and governments should mull over this paradigm and incorporate it, in letter and spirit, in their constitution as well as the day to day working.

Dr Syed Zafar Mahmood may be reached at  info@zakatindia.org