He fought the British as a soldier of Indian National Army (Azad Hind Fouj), was born on 11 April, 1911 in Hyderabad, Andhra Pradesh. His father was Amir Hassan and mother Fakrul Hajia Begum. His original name was Zainul-al-Abidin. His mother Farkrul Hajia was a freedom fighter as well. He quit his college education to participate in the Civil Disobidence Movement and reached Sabarmati Ashram in 1931, where he spent a brief period. Later, he felt that only armed struggle could bring freedom. As a member of revolutionary association he took part in the attempt to destroy the refinery in the Nasik Jail. This act resulted in one year imprisonment for him.  Later, he went to Germany to study Engineering, where he met Netaji Subhash Chandra Bose. He worked as the Secretary to Netaji for about two years from 1942. He created and popularized the slogan 'Jai Hind', which inspired the Nation and also initiated the title 'Netaji' to Subhash Chandra Bose when he was in Germany. He was also arrested by the British along with other commanders of the Indian National Army and he spent some time in prison. When India got Independence in 1947, he joined in the Ministry for External Affairs on the request of Jawaharlal Nehru. He worked as the first Secretary in Beijing and Cairo. He also worked as the Consul-General in Damascus, Bagdad and Denmark. After retirement returned to his home city Hyderabad where he breathed his last in 1984. [Text and photo: THE IMMORTALS  by Syed Naseer Ahamed]                             Answer at the bottom of the page. 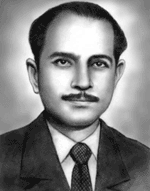