Srinagar: Eight months on, reminiscences of last September’s deluge are still reverberating in the lives of many. Families in and around Srinagar city are yet to reconcile with the aftermath of the natural calamity that befell them early last autumn. A family in Srinagar’s posh locality, Jawahar Nagar, is yet to clear the muck in their two-storey house that was brought along, by the devastating floods that hit the Valley, especially Srinagar city, on 7 September last year. The deluge claimed around 300 lives and injured hundreds across the state apart from causing huge losses to property, which is estimated in trillions of rupees. 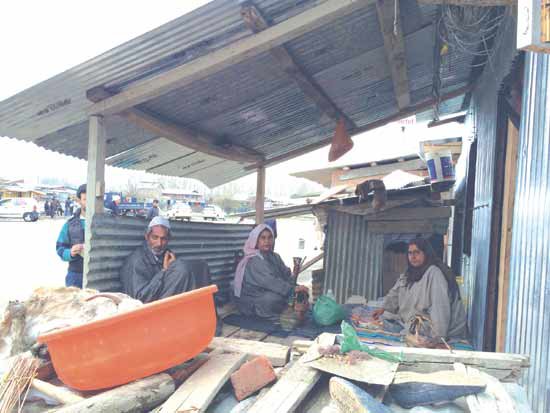 Arshid Begum, alongwith with her husband, Mohammad Abdullah, and mother, Noorie sitting outside their temporary shelter provided by the state government at Parimpora, on the outskirts of the Srinagar city’

“We were scared to come over here,” said Parvez Ahmad Bhat’s family which still lives with their relatives in Nowhatta in the old city of Srinagar since the deluge.

A view of a severely damaged house in the posh Jawahar Nagar,
waiting to be repaired eight months after the floods


The family owns a shop in the city-centre, Lal Chowk. It took them almost four months to get their shop back to normal. “After cleaning the electronic items in our shop, we finally sold them to roadside scrap dealers,” said Bhat, adding that cleaning the shop was our first priority as it is our source of livelihood.

Recalling the fateful day, Bhat’s family said they were caught unawares as they were sleeping and had never imagined that they would face such a natural disaster. While the family was sleeping, the noise of gushing flood waters woke up Bhat’s wife who rushed to wake up others. Soon there was a lot of hue and cry all around. They saw many houses collapsing which filled them with terror. Anxiously looking for help, they quickly brought a ladder, threw it across their neighbour’s window and got into that house. “Water came gushing in and within no time it filled the house upto half a storey. We could think of no other safe option except crossing over to our neighbour’s house via the ladder,” said Bhat.

For almost four days, the families went hungry. “We gave stale rice to our two young children aged 5 and 10 years. Our elder child told us that he would recite Kalima to seek Allah’s help and forgiveness,” said Bhat. Finally, Army rescued them. “We were rescued in Army boat and dropped at the nearby Ram Bagh bridge from where we went with our neighbours to their relatives’ place in Bandipora in north Kashmir. From there we managed to come over to our relatives’ place in Nowhatta,” Bhat added.

The family lost all its household items. “We lost everything we had earned. Government provided us with a meagre compensation of 12,600 rupees,” said Bhat.

Almost at a stone’s throw from Bhat’s family lives Inderjeet Singh Mehta who shares a similar unfathomable tale of trauma. As their house started crumbling, all the seven family members in Mehta’s family shouted for help. They too immediately shifted to the adjacent house after laying a wooden block across the windows of the two houses. As they entered the house, it too crumbled. Without wasting any time, the families hopped to the adjacent house with the help of a wooden block. They, all 35 of them, lived there for a couple of days till the Army rescued them  in boats and dropped them at Ram Bagh bridge from where they went to Gurudwara at Sanat Nagar.  “It was the shock of a life time and thankfully we are safe,” said Mehta, adding, “We could see helicopters hovering in the sky but they didn’t rescue us. Probably, they thought we were safe but we needed help. They airdropped eatables but those eatables fell in the water and we could not get them. It was a frustrating situation that traumatized us no end.”
He added that the government could have easily rescued people in groups using shikaras (small boats), but it couldn’t be seen anywhere. The area remained submerged for almost a month and many people haven’t returned yet. Some live in rented accommodation and others with their relatives. Government, he said, should have used powerful pumps to drain the water from the area. Mehta further stated that it isn’t easy to reconstruct houses and the government hasn’t lent a helping hand in the true sense. “It should come forward with certain schemes like soft loans. Even banks don’t provide us loans,” he said adding that he got a compensation of Rs 175,000 but that isn’t sufficient to meet his needs. Mehta, who is currently residing in a rented accommodation at Barzulla, said they were paid a house rent of Rs 15,000 for three months. Some organizations promised to provide them tents but no one actually did anything while some who didn’t deserve got three to four tents.

Mehta owns an electronic shop that too got severely damaged in the deluge. Many months have passed but his shop is still not functional as he is busy with the reconstruction of his house.

His neighbour, Fojyan Singh’s family lives on rent in a nearby house as they are renovating theirs. He too complains that the meagre amount of 12,000 rupees that he got as compensation from the government is insufficient to meet his requirements. The deluge severely damaged his house. As the flood water entered the area, his family left the house. The water was neck-deep making it hard for them to walk through. Singh recollected how the Central Reserve Police Force (CRPF) bunker nearby helped them to reach an adjacent house where they lived for four days. It was cumbersome for Singh’s wife, who has been almost bed-ridden for the last many years, to move. The family was finally rescued by the Army and shifted to a ‘safe’ place from where they went to a gurudwara. Sitting outside their temporary shelter at Parimpora, on the outskirts of Srinagar city, Arshid Begum together with her husband, Mohammad Abdullah and two daughters, said that as their area of Bemina started getting flooded, announcements were made from the mosques at midnight asking people to vacate their homes. “As we left our houses, water was already neck-deep. We somehow managed to reach the adjacent Srinagar-Baramulla highway and pitched tents there that were provided by the police,” they said. Later, they were shifted alongwith others to makeshift shelters provided by the state government. The shelters comprise of a room, a kitchen and a bathroom. Begum stated that they lived in sheds in Bemina which got destroyed in the floods. She said that out of the 36 families, 20 are living in the temporary shelters at Parimpora. She added, “We’ll not leave this place now till we are provided with the plot of land promised by the government.” She recalled that they used to live in boats at different locations in the city including Safa Kadal, Cement Kadal and Lal Mandi. “Government promised to provide us plots of land and we sold our boats and left the respective places. But the promises made by the government did not materialise.” The family said they got a compensation of 2300 rupees from the government and added that an international NGO helped them with utensils, blankets and money.

Orchardists in Gund Jehangir-Sumbal in north Kashmir’s Bandipora district sharing their woeful tale said they aren’t bothered about their houses as those could be rebuilt, but they want their orchards to be compensated for. Majority of the populace in the area relies on horticulture for their livelihood. A group of youth here said that flood waters after submerging south Kashmir and Srinagar city, flooded their area. The traces of flood water could still be seen in the area. From here the water drains into the Wullar Lake and then flows into Pakistan through border area Uri in north Kashmir. The locals argued that since their orchards continued to be submerged in flood waters, they apprehend low or no productivity this season. According to them, their orchards have lost their meaning and they wanted the government to waive their loans  they had taken for horticulture activity. But no one listens to these voices. They are left to fend for themselves.