Why Al-Qaradawi? And Why Jihad?

In recent times, many scholars called for enlarging the scope of ijtihad regarding issues related to jihad, since topics covering acts of worship or transactions, especially financial issues, have received their due share of individual and collective ijtihad. However, jihad has not received an equal share in spite of its significance and of people’s need for it in all ages, especially the present age in which many nations invite one another to collaborate against this Ummah just as people seated around a platter of food invite one another to eat. 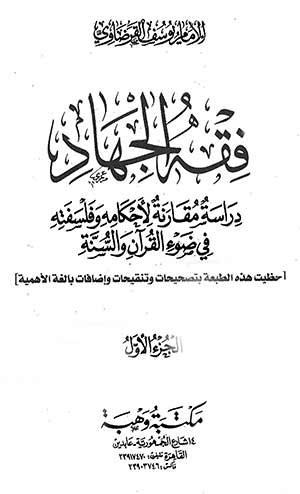 On the other hand, others were afraid to open the door for research on the topic of jihad in the present age lest ijtihad might appear to be justificatory and weak, resembling the status of our Ummah. They feared that ijtihad might breed submissiveness and justification of our bitter reality, inviting the Muslims to be advocates of peace in an age that only recognizes the language of aggression. 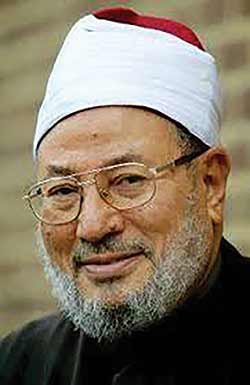 They also feared that ijtihad might become draconian as a reaction to the bloodshed at the hands of our enemies, the violation of sanctities, and the usurpation of our sacred sites. Hence, it would be retaliatory ijtihad that respects neither ties of kinship nor that of covenants and that honors neither obligations nor sanctities, having as its motto the saying of Ibn Zuhayr, “He who does not harm people is harmed.”

However, Almighty Allah opened the heart of the erudite Sheikh and facilitated the means for him to undertake this great burden and carry out this task so that it would be neither justificatory nor retaliatory. Thus, the book came to light when the Sheikh passed his eightieth year (he was born in 1926). In his prime, this man was neither frightened nor tempted by either the sword or the wealth of the ruler, despite the fact that the comforts of life were within his grasp.

He was even in need of being furnished with some of these comforts so that he could utilize them to fulfill the projects for which he had worked and aspired. With all the more reason, he did not pay heed to any blame along his way concerning his Lord after a long life of perseverance and jihad. Though he suffered much annoyance and harm both inside and outside his country, he persisted and persevered, seeking the reward of Almighty Allah, until he obtained a high rank that turned the hearts and minds of people towards him.

Moreover, no one can cast doubts on the efforts and jihad carried out by the Sheikh for the sake of safeguarding the religion, in his keenness on adhering to it, and in his defense of its boundaries throughout his long life. He never fluctuated in quest of mundane pleasures, never flattered anybody at the expense of his salvation in the Hereafter, and never paid heed to any blame he received along his way to his Lord.

Moreover, no one can accuse him of either bigotry or extremism since he is the leader and theorist of moderateness in the modern age as well as the preacher and advocate of the middle path in his thought and fiqh.

In addition, we find his juristic talent, knowledge about reality, firm attachment to juristic heritage, and competence to deal properly with the texts of the Qur’an and the Sunnah. We hope that many people would agree with his ijtihad and thought.

Between Fiqh of Zakah and Fiqh of Jihad

The erudite Sheikh wrote his book Fiqh of Zakah, which earned him his PhD degree, in 1973. Thirty-six years later, he published his book Fiqh of Jihad, and in the introduction of this book he stated,

“I found it incumbent to undertake writing on this topic after Allah has opened my breast to it. How many times, since I finished my book, Fiqh of Zakah, has the idea to write a similar book on Fiqh of Jihad crossed my mind. And, how many times have honorable fellows asked me to write on this issue about which people are divided. Yet, I would apologize to them, giving the excuse that I lacked the spirit to undertake such a task.

“However, I wrote sporadic pieces about it in the past, waiting for the right time to write about it in a regular, uninterrupted manner. This is because it is one of the basic topics that must be addressed through systematic writing due to the need of the Muslims, in particular, and the world, in general, to have proper knowledge about it, far removed from the immoderation of extremists and the undutifulness of the negligent.”

Though Fiqh of Zakah basically addresses Zakah as one of the obligations imposed by Islam upon the Muslims and one of its fundamental pillars, it is also considered a type of jihad -- it is jihad with money. This type of jihad is highly regarded and indispensible, both in this age and at any other time.

Importance of Jihad in the Fiqh of Al-Qaradawi

From the very first line of the introduction, Sheikh Al-Qaradawi illustrates the importance of this relinquished obligation and the resultant danger to the present and the future of the Ummah. He says,

“Without jihad, the Ummah’s boundaries will be violated, the blood of its people will be as cheap as dust, its sanctuaries will be less worthy than a handful of desert sand, and it will be insignificant in the eyes of its enemies. As a consequence, the coward will take heart to attack it, the servile will look down upon it with arrogance, and the enemies will conquer its land and dominate and control its people. This is because Almighty Allah has taken away fear from the hearts of the enemies toward the Ummah.

“Far into the past, this Ummah would be granted victory over its enemy on account of the awe instilled by Almighty Allah into the enemies’ hearts for a distance of one month’s journey. More serious than that - or let’s say, one of the reasons behind that - is the fact that the Ummah has neglected jihad, or perhaps even dropped it from its agenda. It has dropped it in all its aspects: physical, spiritual, intellectual and cultural.

“They believe that whenever the Muslims have the capability, they are obligated to fight the disbelievers merely on account of their disbelief...”

Sheikh Al-Qaradawi’s Moderateness and the Fiqh of Jihad

Sheikh Al-Qaradawi speaks about people’s stance on jihad, dividing them into three categories. About the first category, he says,

“It is a category that seeks to cast a veil of oblivion on jihad and drop it from the life of the Ummah. They, instead, assume as their major concern and role raising the Ummah - as they claim -spiritual values and behavioral virtues, considering this to be the major jihad: ongoing struggle against Satan and one’s vain desires.”

Regarding the second category, he says,

“As opposed to this category, there is another one that perceives jihad as a “fight against the whole world”. They do not differentiate between those who fight against the Muslims, stand in the way of their da’wah or tempt them away from their religion, and those who extend the bridges of peace to the Muslims and offer reconciliation and rapprochement with them, raising no sword against them and support no enemy in its fight against Muslims.

“According to this category, all disbelievers are alike. They believe that whenever the Muslims have the capability, they are obligated to fight the disbelievers merely on account of their disbelief, which they regard as sufficient reason for fighting them.”

He then opts for the moderate approach that is represented by the third category, saying,

“The third category is the “moderate Ummah” which Almighty Allah has guided to the approach of moderation and granted knowledge, wisdom, and deep understanding of the Shari’ah and reality. Hence, it has not slipped into the negligence of the first category that seeks to keep the Ummah unarmed, its Qur’an unguarded, and its home and sanctuaries with no guards to protect and defend them.

“Likewise, it has not fallen into the excess and extremism of the second group that seeks to fight those who are peaceful and declare war against all people without discrimination; white and black, in the East or in the West. Their alleged aim by doing so is to shepherd people to (the way of) Almighty Allah, drive them shackled toward Paradise and take them coercively by the hand to the Straight Path.

“They further add that their aim is to remove the obstacles set in front of those people by despotic regimes that do not allow them to convey the Word of Allah and the Call of His Messenger to the people, so that they can hear it loud and clear and free from all stains.”

Whom Does This Book Address?

Imam Al-Qaradawi lists the categories of people who are in need of this book in order to obtain an accurate understanding of the issue of jihad in a way that is free of both negligence and excess. It is as if he has assimilated the categories of the entire society, Muslims and non-Muslims, rulers and the subjects, civilians and military men, and thinkers and intellectuals. He mentions ten categories that I consider cover the categories of the whole society.

Among the aspects of this approach to fiqh, understanding and ijtihad, is that we should renew the religion from within and perform ijtihad that is compatible with our life and age.

Al-Qaradawi’s Approach in Introducing the Fiqh of Jihad

Al-Qaradawi, speaking about his approach in this useful book, says that it rests on six pillars: namely, the Glorious Qur’an, the purified Sunnah, and the treasures of Islamic fiqh. Moreover, he says that his approach is also built on making comparisons between divine legislation and positive systems, taking into consideration the contemporary reality in which people are living. Thus, he has adopted the moderate approach as he always has in his books and fatwas.  Sheikh Al-Qaradawi has divided the book Fiqh of Jihad into an introduction, nine sections and a conclusion. (Continued in the next issue)

Author and researcher Dr. Rajab Abu Maleeh got his MA in Fiqh and its Principles from the Faculty of Dar Al-’Ulum, Cairo University, and obtained his PhD in Shari’ah from the same Faculty. He may be reached at Ragab10@hotmail.com.