M. HAMID ANSARI, former Vice President of India, hailed a  Farah Naqvi's new book  ‘Working with Muslims: Beyond Burqa and Triple Talaq’ for rightly arguing that –‘THE CONSTITUTIONAL PROMISE OF EQUALITY IS ONLY ACHIEVABLE WHEN DEVELOPMENT REACHES THE LAST IN LINE’. “We need to eschew the prevalent virus of considering Muslims with apprehension, intolerance and otherness,” he said while launching in Delhi on Tuesday evening (27 March 2018). 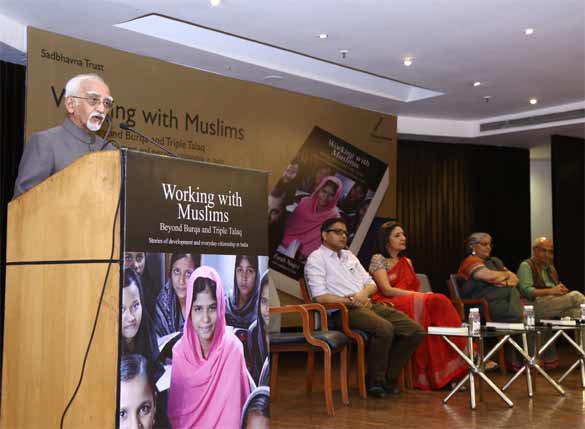 The book, by activist and writer, Farah Naqvi, in collaboration with Sadbhavna Trust, goes down to the ground in eight major states of India, and gives a granular sense of voluntary sector development work, with the largest marginalized minority in the world’s largest democracy.  Stories in the book show the emergence of a new, young Muslim leadership engaging with daily struggles for education, health, livelihoods, women’s rights, while navigating the minefield of ‘identity’ and issues of ‘Muslim-ness’.

The book highlights Muslim women leading the way to a new articulation of issues that impact them, beyond the rhetoric of burqa and triple talaq.  But it also finds that, 12 years after the Sachar report, the ‘development of Muslims’ still struggles for basic legitimacy, wedged between the promise of the Constitution and the politics of communalism. At a time when Muslims are being invisibilized in politics both at the level of representation and concern, this study puts the lens back on core, material issues of development.    The book is published by Three Essays Collective.

Among those who spoke at the discussion following the launch were Senior Journalist Siddharth Varadarajan, Founder-Editor, The Wire and prominent social activist Harsh Mander who said, “At a time when the Muslim people are facing violence and social and political isolation at levels that are unprecedented since Independence, the role of civil society engagement with, by and among Muslim people is more important than ever.”

Political Scientist, Prof Hilal Ahmed from the Centre of Developing Societies felt that the study “greatly enriched our understanding of Muslim communities,” and “offers us an innovative methodological suggestion: Multiple Muslim identities need to be adequately explored, if we are to make sense of the multi-layered phenomenon of backwardness and exclusion in the Indian context. " And Madhavi Kuckreja, from Sadbhavna Trust said – “the study needed to start a new conversation and galvanize work at the grassroots.”

Gagan Sethi, one of India’s civil society leaders, called the book, “a clarion call to secular civil society leaders to invest substantive resources in building a robust Muslim leadership specially women who lead civil initiatives as a minimum response to the systematic demonisation of the word ‘Muslim.’”