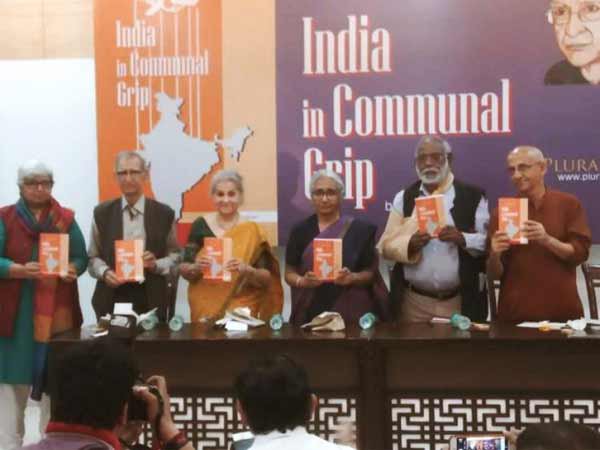 The book outlines the last five years of Modi’s rule. Ram Puniyani writes about Modi’s ascent to power and how conditions were created by the rise of RSS in 1980s, ideological indoctrination, Gujarat 2002 violence, Gujarat Model and Hindutva electoral strategy that helped Modi reach the centre with the agenda of the Hindu-Rashtra camouflaged in development rhetoric. The book looks at the pattern of power, the earlier slogans of Achhe Din, the changing mindsets and increasing polarization in the society, early signals of authoritarianism and symptoms of Fascism. Various strategies to achieve the goal of the Hindutva Rashtra are discussed which include maligning the legacy of Jawaharlal Nehru, glorifying Godse. The book looks in detail at the anatomy of riots especially analyzing Basirhat (West Bengal) and Kasganj violence, using polarization to win election in UP, using Lord Ram for electoral gains. It also talks about Hadiya’s case and freedom of choice, Ghar Wapasi, Cow politics, cow vigilantes, lynchings, attacks on Dalits in Una. Author also discusses the attack on rationalists and the killings of Dabholkar, Kalburgi, Pansare and Gauri Lankesh.

The book looks at the condition of Muslim women and how communal politics has been played in the name of Muslim women. The book has chapters on handling of Kashmir issue by the BJP, education agenda, communal historiography, it looks at demonetization also.

Puniyani writes “Modi’s winning 2014 Loksabha elections with a simple majority (282 MPs with 31% of vote share) was a landmark in the history of India. This gave him nearly 52% of Lok Sabha seats. BJP was in alliance with partners like Shiv Sena, Ramvilas Paswan’s party etc. The elections saw a major media spectacle, with catchy phrases like ‘Aab Ki baar Modi Sarkar’, (This time it will be Modi Government) Acche Din Aane Wale hain (Good Days will come), Bahut Hui Mahangai ki Maar-Aab ji bar Modi sarkar (Too Much rising Prices-Now Modi Government) and so on. Lakhs of RSS volunteers were on the streets campaigning for BJP, Corporate World had opened all its coffers for BJP like never before. The jubilation in the RSS combine touched the sky. This was the first time that BJP had simple majority on its own. Earlier BJP had come to power thrice. First, as a single largest single party in 1996, then as NDA coalition in 1998 and 1999 they came to power. Since it did not have simple majority, it kept its Hindutva agenda under the wraps, while facilitating the RSS wings and swayamsevaks to infiltrate in the portals of society and state.

Ram Puniyani asserts that the authoritarianism witnessed during Emergency regime of Indira Gandhi can in no way be compared to what is being witnessed currently. In Emergency authoritarianism was on display, it was mainly implemented from top down, administrative measure. The current one under Modi is imposed through the foot soldiers, through soliciting its imposition through a section of society, a layer of society is in strong support of the current intimidation and suppression of liberal ethos of society. The RSS associates are in the driving seat. The present regime is not just authoritarian. While Hindu nationalist ideology is one pillar of the corporate controlled economy is the other. The overall atmosphere of growing intimidation speaks of the times to come.

‘India in Communal Grip’ comprehensively covers our times and Modi’s misrule and is an important book for young students as well as politicians and ordinary citizens. While releasing the book Shabnam Hashmi said that the need of hour is to defeat the party with Hindu nationalist agenda, the BJP. Harsh Mander recounted the increase in Hate in society and the efforts of Karawan-E-Mohabbat in assuaging the wounds of families of victims. Aruna Roy called for the need to strengthening of movements for democracy and need to defeat communal forces in society. John Dayal in his remarks pointed out that hate against minorities is on the rise and there is a need to combat this. Syeda Hamid elaborated the effort of book to present the rational aspects of history and need to spread logical awareness in the society.

There was a lively question answer session in which the real threat of BJP’s coming to power again was elaborated by the author. (Press Release)

Books of Ram Puniyani are available at PharosMedia.com/books