Dr Syed Zafar Mahmood 26 Dec 2015
To take India to heights of glory, Narendra Modi will have to simultaneously create a mirror image at home too restoring the lost rights to Muslims as a whole, unlike the Congress which has usually been mentoring a few Muslim individuals and families.

Narendra Modi's stopover in Lahore to greet Nawaz Sharief's family is a diplomatic gesture displaying high form of statesmanship. Having now rubbed shoulders with almost every world leader of good significance and riding his aspirations to become a statesman of world repute he must have realized the futility of sticking to the erstwhile policy of proactive animosity toward the strategic neighbour Pakistan. Earlier he met the leaders of UAE and Turkey and hosted envoys from Muslim countries at his residence. That also reflects his realization that for being a world leader one has to keep channels of communication open with 1.7 billion Muslims spanning 56 Islamic countries and rest of the world.


Prime Minister, Narendra Modi visits the Prime Minister of Pakistan, Nawaz Sharif's home in Raiwind, where his grand-daughter's wedding is being held, in Pakistan on December 25, 2015. 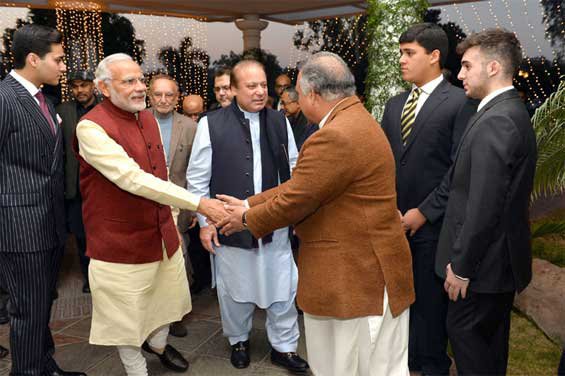 One only expects that Modi will bring about similar change in his party's policy within India. Much before Independence in 1947 the Congress party had monopolized all the tricks of the political trade including superficially courting the Muslims in India yet not taking any substantial measures to ensure the community's proportionate participation in the nation's social, economic and educational progress as documented in the Sachar Committee Report of 2006.

Through the 1950 presidential order the party excluded the community from the definition of scheduled caste and thereby denied the Muslim barbers, blacksmiths, tailors, sweepers etc (unlike their counterparts in Hinduism, Sikhism and Buddhism) of 15% seats in parliament, assemblies, local bodies, government jobs and educational institutions discriminating against them on the basis of religion. As a double jeopardy, constituencies with high Muslim presence have been reserved for scheduled castes. Thus, for the last 63 years the average Muslim presence in 543-member Lok Sabha (house of the people) has remained pathetically pegged at less than 25 i.e. one third of the community's justifiable and proportionate numbers - as per 2011 census, it comprises 14.2% in the national population.

Muslims have been mostly kept away from powerful Government positions such as cabinet secretary (one in 65 years), finance secretary, home secretary, vice chairman of planning commission (now niti ayog), governor of Reserve Bank, director of CBI and the like. Rather Muslims have been confined to institutions established by or related with the community itself like Haj Committee, AMU & JMI, ineffective central waqf council and state waqf boards, toothless minority commissions, under-engaged ambassador in Saudi Arabia and the like. Yes, Muslims have also been president of India and provincial governors but it is well known that these positions are powerless and figurehead.

Despite such conspicuous deprivations meted out to Muslims and their consequent slide down on the developmental scale, the Sangh Parivar has been adopting the policy of blaming the Congress for 'appeasing' Muslims because it didn't find another anti-Congress rallying point having potential of winning the elections. This policy of the Sangh Parivar kept its political hearth warm during the first 3-4 decades after Independence though at the back burner and since late 1980s the political climate began softening making it conducive for the Sangh Parivar to gaining power and retaining it. Of late they've even been telling Muslims to 'go to Pakistan'.

Having ridden the crest of this Sangh policy Narendra Modi became prime minister in early 2014. Soon he realized that the premiership of India is a different ball game more so if the incumbent aspires to become world leader of widespread acclaim and that too when he is agile and comparatively not so aged. That seems to be the reason of his diplomatic somersault vis a vis Pakistan and by proactively befriending it he is trying to bridge the gap that has been artificially created over years between the two vital neighbors.

Modi is also trying to take India to new politico-economic heights of glory in 21st century including its seat as a permanent member of the UN Security Council. For that purpose too, he will have to simultaneously create a mirror image at home too restoring the lost rights to Muslims as a whole, unlike the Congress which has usually been mentoring a few Muslim individuals and families. The community will closely watch Modi's policies regarding itself. His famous remark of July 2015 'Indian Muslims will live for and die for India' is reassuring but now they expect him to come down to brass tacks.