A fatwa against militancy, which collected signatures from over 100,000 Islamic scholars of Bangladesh, was published on 14 June at Sholakia. It declared terrorism and suicide attacks as haram, forbidden, under Islamic law. Thirty volumes of documents consisting signatures from muftis, male and female ulama across Bangladesh aims at reducing radicalism and militancy, and discourages sympathisers and patrons of militancy. Bangladesh Jamiyatul Ulama (BJU), a national body of Islamic scholars, issued the fatwas through a press conference at Dhaka Reporters Unity, saying that those who were killing people in the name of religion were heading for Hell. 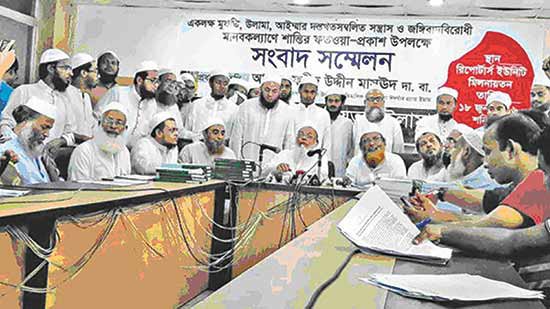 
The fatwas came in the wake of continued attacks on religious minorities, intellectuals and secular writers across the country. Such killings, mostly by hacking with machetes, have risen over the past few months.

The process for the fatwa, which is scholars’ ruling was initiated last December by Maulana Fariduddin Masood, chairman of Jamiyatul Ulama Bangladesh who is the imam of Bangladesh’s largest Eid congregation at Sholakia. The process continued until 31 May amassing a total 101,850 signatures. Of the signatories, 9,320 are female ulama and muftis. Each volume describes the main fatwa which analyses the issue in the light of the Qur’an and Hadith and declares terrorism and militancy absolutely forbidden by Islam.

The fatwa is 32 pages long with an index and the names of associated ulama. The main chapter on the fatwa presents 10 questions in the light of several verses from Surah at-Taubah and a Hadith mentioned in Bukhari Sharif and Muslim Sharif.

The questions addressed by the fatwa are:

1.   Does Islam support crime and terrorism?

3.   Are Jihad and terrorism the same thing in Islam?

4.   Does terrorism create a path to heaven or hell?

5.   Will a suicidal terrorist’s death be counted as martyrdom?

6.   Is genocide allowed in the view of Islam?

7.   Does Islam support the indiscriminate killing of people including women, children,  and the elderly?

8.   What sort of crime is it to kill a person while they are offering prayer?

9.   Is it allowed to attack worship places of non-Muslims such as churches, pagodas and temples?

10. Is it not the responsibility of all - in the view of Islam - to create social resistance against criminals and terrorists?

The main fatwa answers all these questions in light of the Qur’an and the Hadith.

In answer to the third question, the fatwa reads: “Jihad and terrorism are not the same. Jihad is a key teaching of Islam, while terrorism is haram and illegal.”

The fatwa answers the fifth question, saying: “Suicide and suicidal killings are haram in the eyes of Islam.”

The answer to the sixth question is: “It is not legal in Islam to mass murder innocent people. Even killing someone on suspicion is forbidden.”

Answering to the ninth question, the fatwa reads: “Anyone killing a non-Muslim who lives within a Muslim society would never even get to smell of Paradise. Attacking worship places of non-Muslims such as churches, pagodas and temples, is haram and illegal in the eyes of Islam. It is a sternly punishable offence.”

Killing of innocent people indiscriminately is not legitimate in Islam; killing of children, women, and elderly and weak people who don’t take part in a war is strictly prohibited in Islam, even during the war it’s not permitted; killing people during prayers is a heinous and severe crime; whoever kills a believer intentionally, he will be in eternal Hell in recompense; suicide and suicide killings are strictly forbidden in Islam. Even attending funeral prayers of those who committed suicide has been forbidden in the religion, said the fatwa.

The fatwa said, “As Islam forbids terrorism and creation of panic, it could never be the way to go to Heaven. This will absolutely lead terrorists to Hell. Those who have been involved in acts of terrorism for going to Heaven should repent to the Almighty and return to the path of Islam. Allah doesn’t like those who create chaos and violence, the edict added.

Asked how much impact the fatwa might play in defeating terrorism, Maulana Fariduddin Masood said: “I can say with strong conviction that a fatwa is much stronger, much sharper than 100,000 weapons. A correct fatwa purifies the psychological ideals, inspires people and makes them humanitarians.”

In the preface to the fatwa, Maulana Masood writes: “Even if the fatwa for peace and human well-being fails to stop terrorism completely, there is no doubt that it will help reduce terrorism. It can surely be said that patrons of terrorism will be deterred.”

The idea originated at a joint meeting of law enforcers and clerics on 17 December last year, where Masood first proposed that a fatwa by 100,000 ulama signatories be prepared to tackle terrorism.

“Those who kill and terrorise in the name of religion are not doing the right thing. Islam never supports murder. So, a common fatwa with 100,000 signatures would be distributed to create awareness,” the Sholakia imam said.

Copies of the fatwa will be sent to the president, the prime minister, the Organisation of Islamic Cooperation, and the United Nations.

After issuing a set of fatwas against militancy, a section of Islamic scholars stressed the need for reaching out their message to the masses to stop militancy and violence in the name of religion.

Explaining the initiative, Maulana Fariduddin Masooud said it won’t be possible for only the law enforcement agencies to resist the criminals who are ready to kill themselves in the name of religion. The first thing needed is to dispel their misconception about Islam, he added. He urged imams, ulama, teachers, social workers, NGO workers and people with good conscience to spread out the edicts. “We’ve to take stand unitedly against terrorism to save ourselves.”

Masoud said it’s a matter of great regret that some criminals were spreading terror activities and panic in the name of Islam to serve their vested interest. But Islam never supports terrorism and thus it is illegal and forbidden in the religion. Killing non-Muslims and carrying out attacks on churches or temples are heinous crimes, he added.

He noted that all the imams and ulama were with them, except for those “siding with militancy”. Hefajat-e-Islam Secretary General Junaid Babunagari is among the signatories to the set of edicts.

Hefajat leader Babunagari at a press conference at Chittagong Press Club condemned the recent targeted killings across the country saying that such activities go against the spirit of Islam.

Citing a Hadith of Prophet Muhammad (pbuh) he said a person who oppresses and kills innocent people from religious minorities cannot even smell the fragrance of Paradise.

“Those who are instigating communal activities are against the independence and sovereignty of the state,” Babunagari said.

He demanded the government to arrest and mete out punishment to the “real culprits” after proper investigation.