Babri Masjid — Muslim leaders are going against Muslims and Islam

Hem Raj Jain, The Milli Gazette Online 25 Mar 2017
Muslim leaders are going against the interests of Indian Muslims & Islam by not demanding restoration of status-quo-ante of Babri Masjid

As widely reported in media, on March, 21 while hearing an application to expedite the hearing, in a judicial first of the country, Chief Justice of India (CJI) J S Khehar has offered to mediate (by himself or by other Judges of Supreme Court) out of court and settle the Ram Janmabhoomi - Babri Masjid dispute which has been dragging on for almost 30 years. Since the issue involved claims which are lost in history, the CJI said it was a matter of sentiment and must be resolved amicably. 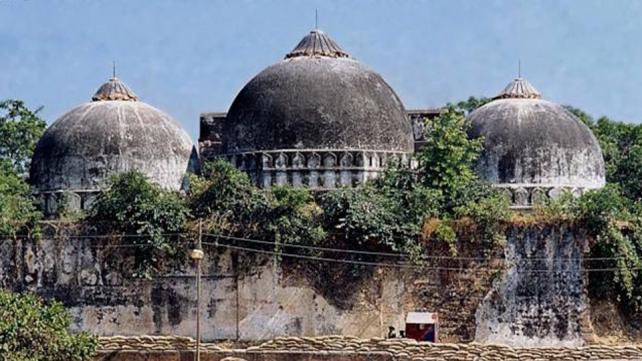 After this media report, the parties to the case the members of Babri Masjid Panel, the ‘All India Personal Law Board’ (AIMPLB) and other Muslim leaders have started appearing on TV channels and they have expressed staunch refusal to any such proposal and their general and common stand is – “[We do not see the possibility of any such move. Previous attempts have all failed but since CJI is himself willing to monitor / mediate the issue we will forward our opinion soon]”   These Muslim leaders think that by doing the drama of taking SEEMINGLY hard-stand they are sending a message to Muslims all over the world in general and in India particular that they are defending the interest of Muslims. But nothing is far from truth. These Muslims leaders have done the greatest harm to Indian Muslims by not demanding restoration of status-quo-ante of Babri Masjid so far though I have asked them to do it umpteen times.   It is a matter of common sense that if you want to suppress any human group then the best way is to suppress its religion. Hence by demolishing Babri Masjid on December 6, 1992 Hindutve forces have suppressed Muslims in the most fundamental senses. Moreover because Muslims did not move Supreme Court for the restoration of status-quo-ante of Babri Masjid the communal Hindus got embolden and indulged in the massacre of thousands innocent Muslims (including children, women and old people) including in 2002 in Modi’s Gujarat. These communal Hindus not only laid their hands on Islam (by demolishing Babri Masjid) but on SCI too because Babri-Masjid was demolished in the presence of the Observer of SCI (hence every law abiding Indian is against said demolition of Babri-Masjid).   Therefore as per law SCI is under legal obligation to restore the status-quo-ante of Babri Masjid otherwise it will be Criminal Contempt of Court (by Supreme Court) under section 2 C (i) read with section 16 of Contempt of Court Act for lowering the authority of the Court. Only thing is that the Muslim will have to merely file a petition in SCI for the restoration of status-quo-ante of Babri Masjid.   The leaders of Indian Muslims have not filed said petition in SCI because they all have been fixed by Hindutva forces (and under their influence the State apparatus of India). If some people say that how entire Muslim leadership of India can be fixed then such people are living in their make believe world. If the entire opposition political parties, media etc can be fixed by Hindutva forces (including by BJP led Modi government) - “[where nobody has questioned (even during elections in 5 States including in U.P.) and even now is not questioning Government of India (GOI) that why it has not recovered Rs ~ 1,000 Trillion State-capital as Income tax from ~ 1 million guilty Indians as was discussed in Parliament on March 16, 2016 and instead subjected entire India to illegal and draconian demonetization]”-  then why one should be surprised if entire leadership of Indian Muslims is fixed (by Hindutva forces) which has not filed and is still not thinking about filing petition in SCI to restore the status-quo-ante of Babri Masjid.   If Indian Muslim leaders are left with any sense of shame, honor and loyalty to not only Indian Muslims but to Islam then they should immediately file a petition in SCI to restore the status-quo-ante of Babri Masjid. In this petition it should be mentioned that Hindus (as in a majoritarian State) can build Ram Temple at the place of Babri Masjid by legislative action (which will de-facto convert India into a ‘Hindu Rashtra’ (Hindu theocratic State) like Muslim theocratic Pakistan] but in no case Muslims will allow it to be built by ‘dadagiri’ (high-handedness) by first demolishing Babri Masjid and then talking about consensus, out of court settlement etc etc. Hence Muslims should mention in this petition in SCI that before any civil or criminal proceeding in any court of India in the matter of Babri-Masjid, first the status-quo-ante of Babri Masjid ought to be restored by SCI.   Muslims should also mention in said petition in SCI that Indian Muslims hope and expect that this time SCI will not set bad precedence of law as SCI did during regime of former PM Vajpayee when in a CIVIL SUIT judiciary took the burden of furnishing evidence for Hindus by digging the site etc in order to search for proof that Lord Ram was born at Babri-Masjid site.   Of-course Muslims will face tough time [after filing said petition in SCI (especially the Muslims of Uttar Pradesh where the site of Babri Masjid is) in view of the fact that a hardliner Hindu saint Yogi Adityanath has been made the Chief Minister of U.P. so that Muslims can be put at their ‘proper’ place if they try to show any resistance in the path of surrendering meekly the Babri-Masjid site for the construction of Ram-Temple] – but this much they should be prepared to bear otherwise they should leave Islam and stop going to Mosques on Friday etc for Namaz etc.