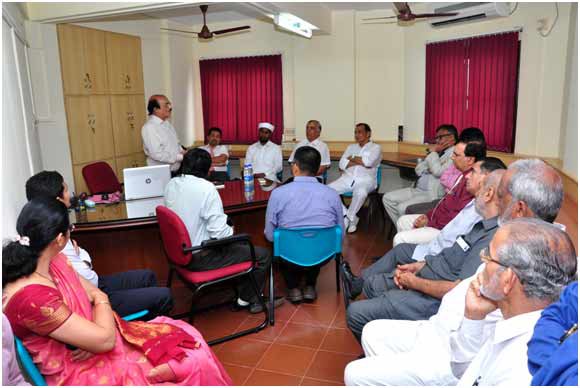 The Major objective of establishing this chair is to integrate and facilitate social, cultural, and scientific dimensions of Islamic practices into the teaching and research programmes of University and establish scientific basis for the Islamic practices through research at all levels including cellular, molecular and genetics. This chair will be involved in pursuing advanced studies in the field of Islam, especially Applied Studies in different fields including Health and Social Sciences. Renowned thinker and author of more than a dozen books on Islamic studies, Dr. Javed Jamil has been appointed as its Head.

The Inauguration Ceremony of the Chair in Islamic Studies& Research was organised at Yenepoya University, Campus Mangalore on 4 April, 2017. A Dua for the success of the Chair was made along with recitation from the Holy Quran. The Chancellor of the University, Mr. Yenepoya Abdulla Kunhi, was the Chief Guest. Vice Chancellor, Dr. Vijayakumar, Registrar, Dr. Shreekumar Menon, Director, Finance Mr. Farhaad Yenepoya were present on the occasion. The trustees of Islamic Academy of Education and other statutory officers of the University were also present.

Chancellor, Mr. Abdullah Kunhi expressed immense pleasure and satisfaction at the inauguration of the Chair and hoped that it would mark another milestone in the history of Yenepoya University. Vice Chancellor, Mr. Vijayakumar briefly described the mode of the functioning of the Chair and hoped that under the Guidance of the Advisory Board, the Chair will be able to function smoothly for the desired objectives.

Dr. Javed Jamil expressed his gratefulness for being appointed for a work that has huge potential. He told that “in today’s world the religious values are being side-lined by the world which has been giving more importance to Economics rather than the life and wellbeing of the mankind resulting in all-prevailing chaos and spread of various diseases”. He expressed the need of developing Applied Islamic Studies as a full-fledged discipline and hoped that such kind of novel work in Yenepoya University will attract the attention of the whole world.