The Supreme Court of India recently offered to a suspended Muslim Maharashtra police constable the revocation of his suspension with the condition that he grows his beard only during the festivities. The man has declined the offer saying that in Islam there is no provision for a temporary beard on which the court expressed its inability to help.


Young muslim sitting in front of a mosque, reading the Quran in Delhi 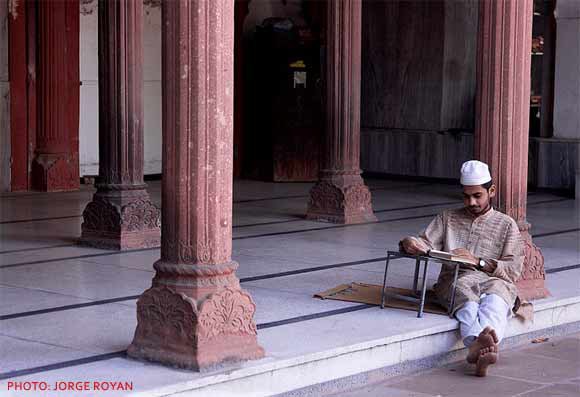 A Sikh bearded government employee in similar situation, however, has unconditional permission to grow the beard all the year round. Let us examine here various aspects of this conditional judicial offer in the light of the constitutional provisions, different faith mandates and international law.

Mandate of the Indian Constitution

Article 25 mandates that all persons are equally entitled to freedom of conscience and the right freely to profess, practice and propagate religion.

Article 29 says that any section of the citizens residing in the territory of India or any part thereof having a distinct language, script or culture of its own shall have the right to conserve the same.

Article 51A(e) & (f) mandates it as every citizen's duty to promote harmony and the spirit of common brotherhood amongst all the people of India transcending religious, linguistic and regional or sectional diversities and to value and preserve the rich heritage of our composite culture;

Mandate for beard in Judaism & Christianity

The rabbinical literature reflects that when God accepted the repentance of Adam he went into prostration and supplicated for the grant of the promised beauty. Immediately a wholesome beard appeared on his face for which Gabriel told him that it has been granted to you and your male offspring till the day of judgement.

Thus the beard became a part of the male anatomy which beautifies, gives respectability and adorns the man. The beard is a natural inherent part of the biological characteristics of the male gender of humanity. Its purpose is also to differentiate between the male and the female. Hence any unnatural alteration to the beard would be considered forbidden and unlawful.

In the Bible, thus, shaving of the beard is considered a sign of mourning and degradation (Job 1:20 & Ezek. 5:1ff.). To humiliate a man, it was the practice to forcibly shave half of the beard as in II Samuel 10:4, where the elders, because of this humiliation, were commanded to hide in Jericho until their beards grew again. Priests were forbidden to shave the edges of their beards (Lev. 21:5), and the the Levites, the sons of Zadok (Ezek. 44:15&20) were not allowed to shave their beards.

The Talmud regards the beard as "the adornment of a man's face" (BM 84a);  Sennacherib was punished by having his beard shaved off (Sanh. 95b–96a). Objection to the removal of the beard was on the ground that God gave it to man to distinguish him from woman; to shave it, was therefore an offense against nature (Abrabanel to Lev. 19.27).

In the Middle Ages the Rabbinical courts punished adulterers by cutting off their beards (C.M. Horowitz, Toratan shel Rishonim, 1 (1881), 29; 2 (1881), 18). The post of ḥazzan was only bestowed upon a man with a beard (Baḥ, OH 53). Kabbalists ascribed mystical powers to the beard. Isaac Luria  refrained from touching his, lest he causes any hair to fall out (Ba'er Hetev, YD 181:5). With the spread of kabbalism to Eastern Europe, trimming the beard was prohibited by leading rabbinic authorities (Noda bi-Yhudah, Mahadura Tinyana, YD 80) and with the rise of Ḥasidism, the removal of the beard became tantamount to a formal break with scriptural tradition.

'The Word of God' speaks of a man needing to have a full, untrimmed beard that centers on the verse in Leviticus 19:27 which is translated by the New King James Version as: “You shall not shave around the sides of your head, nor shall you disfigure the edges of your beard.” (Leviticus 19:27 NKJV)

In the kabbalistic mysticism, the beard represents on earth the Beard of the Holy Ancient One on High, that is, the unfolding of the divine grace symbolized by the strands of the beard. In kabbalistic circles the beard is a sacred object and they would not remove even a single hair from their beard. Following that, all Hasidists wear long beards and sidelocks.

It is dishonourable for a Gaelic man to have no facial hair. Among the Catti, a Germanic tribe, a young man was not allowed to shave or cut his hair. The Lombards derived their name from the great length of their beards: Longobards – Long beards. For his serious utterances Otto the Great used to swear by his beard.

Mandate for beard in Islam

The Quran mentions the beard in the incident when Moses came back from his meeting with God, and found his people worshipping a golden calf. He then grabbed the beard of his brother Prophet Aron in anger demanding to know why had he not stopped the Israelites from taking the calf as a deity for worship. The brother Aron said, do not seize me by my beard (20.94).

This tradition of keeping the beard has continued throughout the serial prophetic editions. At the time of Prophet Mohammad also the growing of beard was considered normal and natural for a man, yet he specifically exhorted "Lengthen your beards and cut the mustaches short". (Sahih Al-Bukhari Hadith 7.780  Narrated by Nafi Ibn Umar).

Whenever the Prophet performed ablution, he took a handful of water and putting it under his chin, made it go through his beard, saying: Thus did my Lord commanded me. (Sunan of Abu-Dawood Hadith 145 narrated by Anas ibn Malik).

The Prophet said, 'There will emerge from the East some people who will recite the Qur'an but will renounce the religion and will never come back to it'. The people asked, 'What will their signs be?' He said, 'Their sign will be the habit of shaving of their beards'. (Narrated Abu Sa'id Al-Khudri, Fateh Al-Bari, Page 322, Vol. 17 - Translation of Sahih Bukhari, Oneness, Uniqueness of Allah, Volume 9, Book 93, no. 651).

Also, Quran says, "When the believers are called to God and His Prophet to accept and practice the law and commands of God and the Prophet that he may pass judgement upon them, their reply is 'We hear and obey.' Such men shall surely prosper." (24:51)

Imam Muhammad writes in his book "Kitabul Aathaar" where he relates from Imam Abu Hanifa who relates from Hadhrat Haytham who relates from Ibn Umar that he (Ibn Umar) used to maintain at least one fist length of beard. Imam Muhammed says that this is what we follow and this was the decision of Imam Abu Hanifa. Therefore, according to Hanafies, to shorten the beard less than a fist length is haraam (absolutely forbidden) and on this is Ijma (concensus of juridical opinions). Imam Shafe'i in his Kitabul Umm states, "To shave the beard is haraam." (Shari Minhaj dar Shara Fasl Aqueeqa).

According to scholars of Islam: "To shave off the beard is unlawful (haraam) and one who shaves his beard is legally speaking an unrighteous fellow (Fasiq); hence, it is not permissible to appoint such a man as an Imam." (Shami Vol.1, p.523). Durre-Mukhtar states: "No one has called it permissible to trim it (the beard) less than fist-length as is being done by some Muslims." (Vol. 2, p. 155). Also, "It is forbidden (haraam) for a man to cut off another's beard." (Vol. 5, p. 359).

Imam Ghazali says: "Know that the key to total bliss lies in following the Sunnah and in emulating the life of Prophet in all that issues from him, and in all his doings (Kitab al Arba'in Addin, Cairo 1344, p. 89).

According to 'Takmela e Bahr al Raiq' the daily recitation of a band of angels of God is "Holy is the Being who adorned men with beards and women with braids" (Vol. 3, p. 331).

Mandate for beard in Sikhism

For a baptised or Amritdhari Sikh, it is mandatory to keep the hair uncut honouring and accepting the perfection of God's creation. This command was issued by the tenth master, Guru Gobind Singh at Vaisakhi 1699.

Says the puritan Sikh, 'My mind is the dust of the feet of the Holy. I dust the Guru's Feet with my hair' (p. 1335). Call in the long-haired scholarly Saints of the Lord, to read the sermon of the Lord. (p. 923). The Gurmukh (saintly person) attains the supreme, sanctified status. He meditates on the Lord with every hair of his body. Says he, 'O Nanak, the Gurmukh merges in Truth'. (p. 941). God is found in "all places, the forests and the meadows, the three worlds, and every hair" (p. 966).

Bhai Gurdas Ji states (Vaar 28, Pauri 10) that acting according to the instructions of the Guru is the performance of the Sikh life.

On 19 March 2015 the Human Rights Council of UN General Assembly unanimously called upon (A/HRC/28/L4) all the states to take effective measures to ensure that the public functionaries, in the conduct of public duties, do not discriminate against an individual on the basis of religion or belief. It also called upon the states to foster religious freedom and pluralism by promoting the ability of members of all religious communities to manifest their religion.

Earlier, in the Minority Schools in Albania case, the Permanent Court of International Justice had ruled that within a State 'the nationals belonging to racial, religious or linguistic minorities shall be placed in every respect on a footing of perfect equality with the other nationals of the State’.

Yet, there are many Jews, Christians, Muslims, Sikhs who shave off their beard but this is not a yardstick of understanding whether or not their respective faiths mandate the growing of the beard.

Thus, the most honorable judges of our Supreme Court would surely and very kindly share with the people of Judaism, Christianity and Islam as to what are those scriptural mandates of Sikhism that, in their view, bestow upon the followers of the Sikh beard an extraordinary status that is denied to the Jewish, Christian and Muslim beard. Why the latter are offered the restricted permission to keep the beard only during festivities? Does this not violate Article 15 of our Constitution that prohibits state discrimination among the citizens based on religion?

Does it fully mesh with article 51A casting the duty upon every citizen of our motherland to promote harmony and the spirit of common brotherhood amongst all the people of India transcending religious and sectional diversities and to value and preserve the rich heritage of our composite culture?  Does the SC's stated inability to help the Maharashtra constable squarely fit into the ruling of the Permanent Court of International Justice ? Does it respond to the call given by the Human Rights Council of UNGA?