Vinod Khanna got disillusioned with spirituality

I don't exactly recall the year, an article by Vinod Khanna The Asian Age first carried in. It was perhaps 1986/87. The article was first published in the 1980s and I got to read it in the London edition of The Asian Age in 1999. I wonder, how the emotionally charged people of India are now saying that the debonair actor was very spiritual.

Spiritual he indeed was initially but got disillusioned after a few years when he personally interacted with Rajnish, Jiddu Krishnmurthy and Mahrishi Mahesh Yogi of Jabalpur, who built a 'spiritual empire' in the US out of his dubious transcendental meditation. 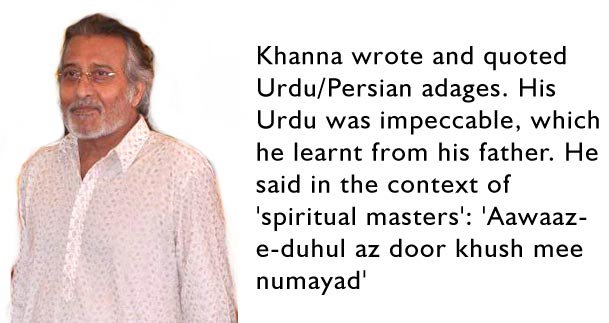 I still remember, one striking line from Khanna's article in The Asian Age in which he wrote and quoted Urdu/Persian adages (Vinod Khanna could write impeccable Urdu, which he learnt from his father). He said in the context of these three 'spiritual masters': 'Aawaaz-e-duhul az door khush mee numayad' (The sounds of trumpets appear pleasant from a distance. English equivalent: Blue are the hills that are far from us).

He left Bollywood at the zenith of his film career and joined Osho's commune in Poona, where he was ostensibly a gardener/seeker but actually a playboy, whose days began and ended with gamboling in bed with ivory white women and highly-sexed Indian socialites.

Khanna admitted that because at that age, he was fascinated more by Rajnish's 'Sambhog se samadhi tak' (from copulation to contemplation). He later realised that it was just sex and spirituality was a façade, a front for all nefarious activities.

Khanna couldn't accept Osho's exclusiveness and his condescending remark that he was a Guru for obscenely rich people. He (Vinod Khanna) found him (Rajnish) to be very phony. So was Jiddu, whom he met in Bombay and then in California. Khanna felt that Jiddu couldn't come out of his Hindu Brahaminical shell and Rajnish was a Hindu-Jain who talked superficially about enlightenment.

He left that spurious spiritual sphere and went back to Bombay; acted and had a stint with politics. He wrote in The Asian Age: 'I realised that spirituality was meant for rich people who loved to indulge in things and phenomena that are absolutely impractical.'

So very true. One must doff his/her hat to the honesty of the departed soul. Adieu, Vinod Khanna.

Comment of Editor of Osho World Patrika on the above article on Vinod Khanna:

Hello Editor,   I read your article about your tribute to Vinod Khanna. It is all nonsense that you wrote. I have known Shri Vinod Khanna as Swami Vinod Bharti for last 40 years frequently. He could never say such things about Krishnamurti or Osho. It is unimaginable. He had the highest respect for both the mystics and Osho was his guru, whose mala he had been wearing till the last day of his life. Listen to his inTV interviews or reports from other media, and you would not come across such falseness as you wrote. If journalism means all lies, you are the number one journalist.   You must apologise to all the Osho Lovers and Krishnamurti friends as your description about them as Hindu and Hindu-Jain is also complete nonsense. Both the Enlightened Mystics were beyond such narrow confinements. They were pure human beings who had nothing to with being Hindu, Muslim, Jain or Buddhists or any imprisonment for human consciousness.   For Example, I am sending you an excerpt for your understanding, even though I doubt that you will understand, you seem to be prejudiced person.   “Christianity, Hinduism, Buddhism, Jainism, Mohammedanism - these are only ideologies, dogmas, creeds; they are only cults. The true religion has no name, it cannot have any name. Buddha lived it, Jesus lived it - but remember, Jesus was not a Christian and Buddha was not a Buddhist, he had never heard of the word. The truly religious people have been simply religious, they have not been dogmatic. There are three hundred religions in the world - this is such an absurdity! If truth is one, how can there be three hundred religions? There is one science and three hundred religions?   “If the science that is concerned with the objective truth is one, the religion is also one because it is concerned with the subjective truth, the other side of the truth. But that religion cannot have any name, it cannot have any ideology.   “I teach only that religion. Hence if somebody asks you what my teaching is, in short, you will not be able to say - because I don't teach principles, ideologies, dogmas, doctrines. I teach a religionless religion, I teach you the taste of it. I give you the method to become receptive to the divine. I don't say anything about the divine, I simply tell you, “This is the window - open it and you will see the starry night.”   “Now, that starry night is indefinable. Once you see it through the open window you will know it. Seeing is knowing - and seeing should be being too.   “There should be no other belief.   “So, my whole effort is existential, not intellectual at all. And the true religion is existential. It has always happened to only a few people and then disappears from the earth because the intellectuals immediately grab it and they start making beautiful ideologies out of it - neat and clean, logical. In that very effort they destroy its beauty. They create philosophies, and religion disappears.   “The pundit, the scholar, the theologian, is the enemy of religion. So remember it: you are not getting initiated into a certain religion: you are getting initiated into just religiousness.   “It is vast, immense, unbounded - it is like the whole sky. Even the sky is not the limit, so open your wings without any fear. This whole existence belongs to us: this is our temple, this is our scripture. Less than that is man-made, manufactured by man. Where it is manufactured does not matter much - beware of manufactured religions so that you can know the true, which is not man-made. And it is available in the trees, in the mountains, in the rivers, in the stars - in you, in people that surround you - it is available.” -- Osho   Swami Chaitanya Keerti Editor: Osho World Patrika oshoglory#gmail.com

Dear Chaitanya Keerti,   I had this inkling that 'Swami' Chaitanya Keerti would take umbrage and lo, he took! Well, I don't want to get into an interminable dispute and create misgivings and bad-blood.   But when it comes to casting aspersions on my journalistic integrity, I never fail to hit back. Not just in one newspaper, Khanna wrote in 3/4 English and one Punjabi daily (I'm forgetting its name) that Rajnish was full of I, me and myself.    The late Dilip Chitre once asked Vinod Khanna why did he leave the commune after five years? Vinod Khanna counter-questioned him, 'Why did Kabir, Danny and Mahesh (Bhatt) leave the commune?'   Rajnish,  Jiddu, Mahesh Yogi and all Hindu 'gurus' of their ilk were same, including you.    VK was a playboy and women at Osho Commune were easy lays, though I seldom use such terms for women.   But you've compelled me to use the harshest language.   I've read Rajnish and Jiddu. They were repetitive and boring after a point.   First of all, you must understand what's meant by spirituality and remember, spirituality cannot be realised living in ivory towers and possessing a fleet of the most exquisite imported sedans.    I rest my case here.   All the best, 'Swami'.   SP