Saira Bano & Dilip Kumar; Ustad Dagar; Why does Uttarkhand have so many Langurs?

In 1999, I came to know that Saira Bano and Dilip Kumar were in New Delhi. I was keen to interview them, so I tried all the possible sources that could connect me with them. But the closest I could get by way of a source was a homoeopath who was treating the couple. And the closest he could get by way of helping me get an appointment with them was to tell me that they were staying at the Le Meridien Hotel. 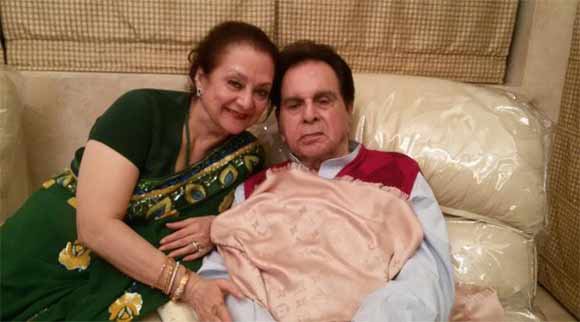 I landed at the hotel lobby, but before I could move towards the reception, I could see Saira Bano and Dilip Kumar in the glass lift descending to the lobby.

I rushed towards them, but before I could begin with my well-rehearsed lines, introducing the homeopath connection by way of introduction, I could see a frown spread across Dilip Kumar’s face. It was obvious that he hated this intrusion, and in chaste Urdu – well, Urdu so chaste that it seemed out of place and filmi – he said that I should have come only and only with a prior appointment, and they being so very busy here in New Delhi, did not have the time to say even a word.

He walked out of the lobby, along with his wife and several others who had gathered around to hear him.

It was the summer of 1999. It was a crucial and tense phase for the couple – that was the year of the big political controversy surrounding Dilip Kumar and the Nishaan-e-Imtiaz, which the Pakistani Government had bestowed on him, and which he refused to return…. I was told that the two were meeting several important political people in Delhi at the time and were keeping miles away from journos.

Not one to give up, I waited. Well long enough till I could manage to interview Saira Bano…When I got a chance to speak to her, this was my first question to her. “Why doesn’t your husband return this award? Why keep it when it is causing so much tension?”

She’d replied, “Return it? Are we living in a democracy or is it some sort of dictatorship? How much we are being bullied! Tell me how much of a mess can you take in your life? After all, this award was not given to him now, but it was given last year, in March 1998. Even then, Dilip saab was so cautious, that he first took permission from our Government and from the Prime Minister.”

“But your critics are crying themselves hoarse, saying that this is 1999, there’s a war with Pakistan so the scenario has changed…”

To that, Saira Bano said, “Tell me, do we now go looking for all those trophies, awards and citations that our cricketers and sportspersons received when they had played in Pakistan? Should we ask them to give back all those awards they’d received earlier? I’m told that even LK Advani sahib had got some citation from Pakistan…all this talk of returning awards seems petty.”

“Your husband’s critics point out that Rabindranath Tagore had returned the title that the British had bestowed on him, and in keeping with that action, Dilip Kumar should return this Award. What are your comments?”

“It is said that certain Right-wing political parties in Mumbai are not happy with the social service work you undertook after the Bombay riots of 1992-1993. Is this why you are facing this backlash?” I queried.

She said, “There is a communal trace to the whole issue, but let me add that I do social service for all people, people from different communities. I try to reach out to whoever is in need…And I do so with a group of close friends who belong to different communities; in fact, most of my friends are Hindus. We are not high profile at all, but try to serve in a quiet way…I feel very upset by what’s been happening. Witnessing those riots was a nightmare, and the growing fascism and communalism has hurt me, shattered me. I feel grieved, as though my dream has been broken, my glass been shattered. One hopes that common sense prevails and this growing communalism gets controlled, so that we can all coexist in peace.”

“Usually film stars stand united in times of crisis, but in this present crisis that you and your husband are facing, film stars are maintaining a studied silence. What do you think of this?”

“Have they stood by anyone? Nobody takes a stand these days! Even when Sanju (Sanjay Dutt) was being harassed, the only two people who spoke for him were Shatrughan Sinha and my husband. Even when the film Fire was in trouble, only my husband spoke out on the matter.”

This ‘gas chamber’ capital city can get on your nerves. What, with the pollution, the pace, the murky politics around. And last fortnight, I decided to get going …towards Satoli, not too far from Mukteshar and Almora in the Nainital district. That much needed get-away! In fact, a couple of friends had anyway planned to go on that trip and I decided to go along. Good that I did , for within a couple of hours after reaching Satoli and settling down in a lovely cottage - One Partridge Hill – one felt the change in the very atmosphere. Not just an abundance of clean fresh air but absolute tranquility. Solitude! Few locals could be spotted on the roads and that’s about it. In fact, as luck would have it, the home next to One Partridge Hill was Geeta and Colonel Dr. Skehkar Pant’s. Yes, they are the well-known couple who have been reaching to the Kumaoni population of Satoli with an array of facilities through the NGO Aarohi which Dr Pant heads… he travels to Satoli every month to oversee the running of a school, medical and health facilities, mobile vans, outreach programmes that his team runs in this Kumaon belt. In fact, I am yet to meet a Kumaoni who is so very proud his place of roots. 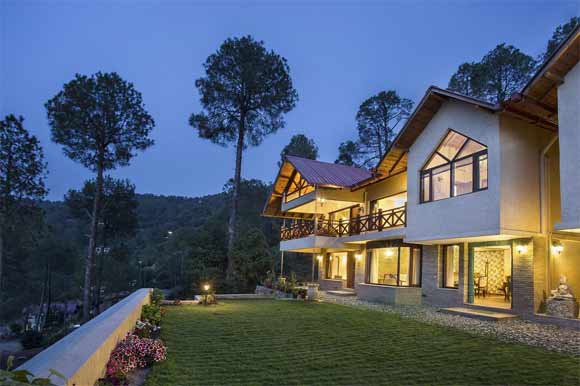 There is something wonderfully serene about this belt; drawing many from the capital city towards it…to this serenity. Our hosts, couldn’t last minute make it but gave adequate instructions to the staff to provide us elaborate veggie meals and take us around…we traveled towards Mukteshwar, Kwarab and the connecting locales.

For me the only jarring note in this otherwise great trip was monkeys and langurs all along - that is, all over the Kumaon region. They seemed to be not just along the roads and highways but also on agricultural stretches. In fact, an agricultural expert told me that farmers and cultivators of this belt are finding the going tough as monkeys have been let loose, “in the last few months the monkey population in the entire belt has tripled because truckloads of monkeys were transported and dumped here …brought here in a caged condition from Western Uttar Pradesh and uncaged here on our land! Wrecking havoc for the cultivators.”

Well, havoc is getting wrecked on the entire land by the Right-Wing goon brigades going about lynching. Going by latest reports even Muslim children are getting targeted on the so-called suspicion of carrying beef! What a pity, even after 70 long years of our Independence the Muslim community sits not just bypassed but in fear of getting hounded and attacked if not killed by Right-Wing brigades. As I’d mentioned in my last week’s column I, as an Indian Muslim, do not feel azaad enough to eat or wear or even greet the way I’d want to …The political mahaul has begun to suffocate me, throttling me ever so steadily, day after day.

The very first time I had attended a Dhrupad concert was in the mid-1980s at the residence of the then envoy of Qatar to India, Dr. Hassan Al Nimah…The setting was absolutely perfect - under white shaminas erected on the sprawling lawns of the ambassador’s residence, the two Dagar brothers - Ustad N. Zahiruddin Dagar and Ustad N. Faiyazuddin rendered Dhrupad. 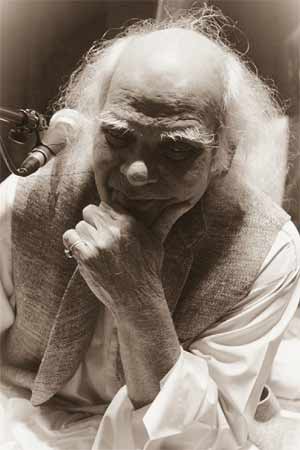 And the very first time I had met Ustad Sayeeduddin Dagar was around the same time. In fact, several days after that concert I wanted to interview the Dagar brothers and set out looking for their home. I was directed to a first floor flat in New Delhi’s East Nizamuddin locality. The stairs led to a study which had a chandni (white sheet) spread out on the floor. Ustad Zahiruddin was sitting on it doing riyaz… I was ushered inwards by Ustad Faiyazudin sahib’s wife Mehmooda Begum. She had introduced me to her brothers-in-law - Ustad Sayeeduddin, Nasir Aminuddin, Fahimuddin, Zia Mohiuddin and Zia Fariduddin.

And now when news comes in of the passing away of Sayeeduddin Dagar nostalgia overpowers. One doesn’t want to sound clichéd but then, how else to describe the scenario - passage of time taking its toll... Yes, till about a couple of decades back, it was a full household when the seven Dagar brothers were alive. One would see them all at their small home. Though three of them - Zahiruddin, Sayeeduddin and Faiyazuddin - lived in that home together with their families (Faiyazuddin and Sayeeduddin were married with children but Zahiruddin remained a bachelor), the other four brothers - Aminuddin, Fahimuddin, Zia Fariduddin and Mohiuddin - would visit from the cities they were based in. And yes, it was a treat to watch them for there seemed much togetherness and that feel of a clan. Clan of great music givers, for not to be overlooked is the fact that Dhrupad started in the 15th century when a Dagar was a court musician for Emperor Akbar and till date, this tradition has been going on in the family, unbroken so far.

And I had last met Sayeeduddin Dagar around the start of 2014, during the two-day-long concerts by the Dagars at the Indira National Centre for Arts. Sayeeduddin Dagar was performing with his sons, Aneesuddin and Nafeesuddin. That evening amongst the audience were a large number of his French students - several had travelled from France to India to be able to do riyaz with him and were putting up at the various guest houses in the city. After the concert we drove to Wasifuddin Dagar’s Asiad Village home for an informal get-together… There was tremendous warmth and I got to meet his French disciples – Mitchelle Dehoky, Jerome Cormier, Brigitte Peterfalvi …and several Indian disciples too. I recall meeting one of their Jaipur-based senior disciples, Iqbal Khan, who has been closely associated with the Dagar family for years and makes it a point to be there for each and every occasion associated with the family.