Last week I watched rather too attentively, journalist Srinivasan Jain’s in-depth programme on NDTV. After all, he and his team of reporters were detailing that there are no signs of security threat from the Rohingya refugees taking refuge in our country. Each NDTV reporter, reporting from the four locales where the Rohingyas have been living in tents and shacks for the last decade - Jammu, Faridabad, Rajasthan and Delhi – was seen talking to police officials who seemed to give a clean chit to these refugees. Nah, none of the ISIS, Al-Qaeda, Indian Mujahedeen or Jihadists tags to any of the refugees!


A Rohingya Family in Delhi looking for help and support 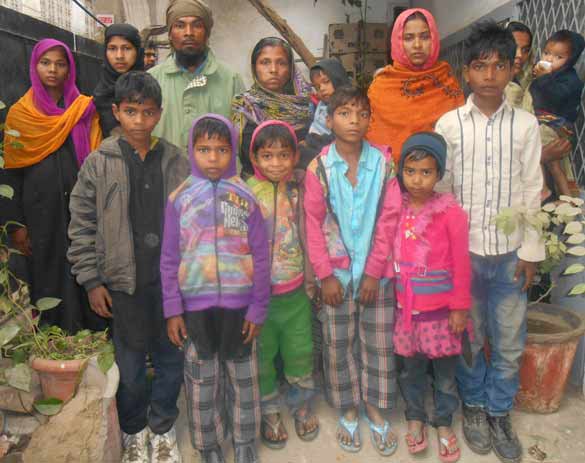 To quote these details from NDTV’s website: ‘An NDTV multi-city investigation into key Rohingya settlements in India found little evidence of terrorist links, or of greater criminality. We focused on the four main centres where Rohingyas are based in India - Jammu, Delhi, Rajasthan and Haryana. Jammu has the highest number of Rohingyas - 5,743 in all. On January 20th this year, Jammu and Kashmir Chief Minister Mehbooba Mufti told the Assembly that "no Rohingya in Jammu and Kashmir has been found involved in militancy-related incidents. No instance of radicalizing (of) these foreigners has been reported so far". She said, "17 FIRs have been registered against Rohingyas for various offences, including those relating to illegal border crossing."

NDTV found that of these 17 FIRs, the two cases are against Bangladeshis and one against a Pakistani. So effectively, there are only 14 FIRs against 5,743 Rohingya Muslims, a crime rate of 0.24%.... ‘We tracked down every single one of the 14 FIRs or first information reports to find the following: eight cases for lack of visa, two cases of rape, one case of cow slaughter, one case for causing injury, one case for selling goods in the black market and one for stealing railway property. These findings were matched by what the senior police officials in Jammu told NDTV: "I haven't seen anything alarming in terms of their (Rohingya Muslims) criminal records. They are involved in petty theft like other groups of that social economic situation. But we haven't found anything alarming or their involvement in organized groups or very sensational nature cases so far," said Dr SD Singh, Inspector General of Police, Jammu.’

‘In Delhi, home to approximately 1,000 Rohingya Muslims, police officials said that they had no data on FIRs registered against Rohingyas in the city, or any evidence of radicalisation. Given the condition of the Rohingyas, they added, it seems highly unlikely that they will be drawn to extremism…In Jaipur, 350 Rohingya Muslims are spread over four police station areas. NDTV found that in these police stations, there was only one FIR, of a rape charge by a Rohingya woman against a Rohingya man…In Haryana, the Rohingyas are clustered in Faridabad and Mewat. Police in Faridabad told NDTV that no cases are registered against Rohingyas. Police officials in Chandigarh said they have no state-wide data on crimes by Rohingyas.’

Contrasts have begun to hit. Why is this government insensitive to the plight of these Rohingya when Sri Lankan Tamil refugees have been given refuge in the southern locales of the country and the Tibetan refugees have been officially housed not just in and around the hills of Himachal Pradesh but even in the heart of Srinagar city and Delhi.What had taken me by complete surprise was to see a well-planned basti of Tibetan refugees living in the heart of Srinagar—close to the Makhdoom Sahib dargah. When I’d asked the locals what they thought of these refugees living in their midst, they’d told me: ‘They live here but for them the Dalai Lama is their only leader. Even culturally they are different… they are not like us Kashmiris.’ That could perhaps explain why they lived huddled together in this colony, having little involvement with the local politics and people. Living in the Valley, their source of economic survival seemed embroidery, tailoring and owning eateries …The Kashmir Valley has anyway a history of giving refuge to Sufis fleeing from Central Asia and settling there in the Valley. And these Sufis had spread around love and peace and much more along the strain. They even brought from Central Asia the handicrafts for which Kashmir is so much known today.

Another hitting reality is that these hapless Rohingya refugees living in refuge here are surviving in the worst possible conditions. Sub-human or inhuman are those conditions. Also, not to overlook the rather well-known fact: the police and the agencies are keeping a watch on these refugees. So what supposed terror can these hapless human beings unleash!

Can’t let go of September without writing on the Alzheimer’s Disorder. The World Alzheimer’s Day is observed each year on September 21. Till date in India awareness about this disorder is still rather low. To most, Alzheimer's is just another of those disorders which has yet to find a cure, although it was diagnosed as far back as 1909, by a German pathologist, Alois Alzheimer.

Those affected by this disorder change beyond recognition. Their intellectual capabilities deteriorate and only ‘little islands of memory’ remain. As a specialist puts it, ‘memory becomes polka dotted.’ With pathological changes in the brain beginning to take place, the affected person's life undergoes a sharp transformation. Problems such as recognising even immediate family members or doing even the most routine chore set in. And pathological changes in the brain have many off-shoots. The affected person may get into a shell or, on the contrary, turn somewhat aggressive.

My father was struck by this disorder…he passed away almost twenty years ago, but before he died, he had to grapple with Alzheimer's! He had become so very quiet and withdrawn. He wouldn't recognise us, although his eyes relayed much restlessness. Sometimes he would murmur sentences and recall some incident, long gone by. Occasionally, he would burst into tears, cry like a child, something terribly painful for us. I remember one incident that moved us deeply. We saw him looking for something he seemed to have lost. He moved about restlessly, peering under beds, behind sofas and doors. When we asked him what the matter was, he spoke with restless impatience, ‘Where are my children? I'm looking for them. They're lost!’ We were standing right there, staring at him in utter disbelief but he couldn't recognise us!

No amount of medicines or lotions or potions can really reach out. Those with Alzheimer's need time, affection and love, and lots of gentle care. Sadly I couldn't spend much time with my father since he was located in a different city…this is one of those ongoing regrets of my life that keeps nagging me each day.

It weaves its web/

For seven years had

Silent as a safe