What does one say about reports regarding construction of a temple in Meerut (Uttar Pradesh) with 100-feet tall metal statue of Prime Narendra Modi? This temple’s foundation stone is, reportedly, expected to be laid on 23rd of this month. With donations and all, this temple is planned to be completed in two years. Undoubtedly, supporters and fans of Modi are taking all measures possible to elevate his importance and stature for Indians. The next parliamentary elections are due in less than two years from now. The decision to build the temple in UP, the state that sends largest number of members to Lok Sabha is probably devoted to enhancing Modi’s electoral importance for voters here. Paradoxically, the religious card is being tapped by raising Modi to the pedestal of a religious deity. Statues of other deities actually worshipped by Hindus are also to be built in this temple. 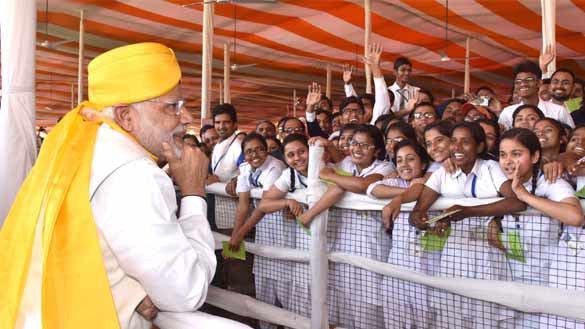 This only suggests that Modi and his supporters are trying all strategies possible to return to power in 2019. Their agenda is devoted to create greater hype about Modi’s image. On his part, Modi himself has devoted greater attention to promoting his image than actually ensuring implementation of his plans that may actually help in the development of the country. To a degree, this point is supported by his approach towards his cleanliness drive. The premier must certainly be credited for displaying no qualms in picking up the broomstick as a part of his cleanliness campaign. But this is not enough.

With a broomstick in his hand, Modi probably expects it help him achieve great heights. Even with Modi in the lead, broomsticks are least likely to help cleanse this country of all the dirt that is lying around, literally as well as symbolically. Initiation of this campaign by picking up the broomstick has, however, played a great role in giving a major boost to theimage of Modi among people at large. Now, the key question is as to how far this can go in convincing the people about advantages that this really holds for them.

Speaking democratically and socially, Modi and his political colleagues have been endowed with the primary role of heading the central government on the strength of people’s votes. It is the people’s taxes that play a key role in financially supporting the government. Therefore, it is but legitimate for people to expect financial benefits and not excessive burden from the government’s policies. But inflation, demonetisation, GST and other such moves have only added to financial woes of thepublic at large.

Not surprisingly, of late, questions have begun being posed about theefficacy of certain moves initiated by the present government apparently in theinterest of the people. The common people have also started voicing their grievances. An article written recently by BJP leader Yashwant Sinha has, in essence, echoed what has been silently voiced by common people at large for quite some time. It may take Modi some time to redress the same. Now, regarding his cleanliness campaign and the importance given by him to his image with a broomstick, it may be worth noting that similar brooms are not used in certain parts of theworld, particularly United States. Modi apparently needs to give second thought to promoting his international image regarding cleanliness through pictures on official calendars, diaries and elsewhere with a broomstick in hand.

The limitations in theimplementation of Modi’s cleanliness drive need greater attention. If Modi can take speedy measures regarding his demonetisation drive that included updating ATMs, printing of new notes and so forth, he certainly can adopt a similar approach regarding his cleanliness campaign. It may be noted that neither thedemonetisation-drive nor GST in general has been favoured by people in general. This suggests that prior to initiating and also executing these moves, Modi did not pay much attention to gauging the possible mood of people regarding these. This implies that when it comes to taking steps in directions viewed “constructive” by him and his coterie, people’s opinion matters little. And this can probably play a major role in giving a great boost to his cleanliness drive.

The typical Indian habit of becoming more concerned about thegovernment’s moves and plans when it hurts or benefits their pockets cannot be ignored. Even today, a drive in the capital city displays huge garbage piled up in several areas. Prime Minister Modi needs to pay greater attention to imposing heavy fines on people indulging in actions that can only mar his cleanliness drive. Modi also needs to take note of aggressive violence several extremist elements have reportedly been engaged in targeting minorities and the fairer gender. It is time that Modi urged them not to indulge in these activities and instead paid greater attention to his cleanliness drive, at least in the interest of promoting his image. If his supporters and party members can be motivated to elevating his stature to thelevel of a Hindu deity, they can certainly display a little more loyalty by actually participating in his cleanliness campaign!