Sumit Paul 20 Oct 2017
The unmistakable stamp of Islamic architectural style and the grandeur could never be emulated or replicated by a single Hindu king.

'To distort history is to mutilate the truth and when truth is tampered with, the outcome is always flagrantly compromised and blatantly false,' Sir Arnold Toynbee stated in his book, A historian's integrity. 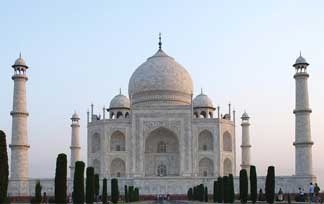 This I'm quoting in the ongoing context of the raging debate over the contributions of the Mughals and their exquisite manifestations and imprints as connoisseurs of all that's beautiful in all ages. Now Shahjahan's world-famous Taj Mahal is being targeted by the mutton-headed BJP activists and ministers who're of the opinion that this magnificent mausoleum was actually built by a Hindu king and that Shahjahan had the hands of the artisans chopped off after they built Taj, so that they could never create a replica of it. These are the egregious lies that are being drilled into the minds and psyche of people who've not gone beyond WhatsAp and utterly inauthentic messages on their android phones.

In fact, what the Muslim rulers and the dynasties gave India, can never be truly measured by the prejudiced Indians. Three hundred years of Mughal rule, beginning from 1526 to 1857, was one of the most remarkable periods of documented Indian history. Agreed, there were a couple of ruthless Mughal emperors, viz. Aurangzeb and to some extent, Jahangir, yet the overall Mughal rule was much more tolerant and peaceful than the oppressive rule of the Brits who came on the sly and when they left, the country was partitioned into India and Pakistan.

To deny history is to deny your own heritage. Just one honest look at Taj will convince you that it couldn't be made by any Hindu ruler. The unmistakable stamp of Islamic architectural style and the grandeur could never be emulated or replicated by a single Hindu king.

Moreover, a piece of art available for public consumption defies nitpicking scrutiny. Remember, the maker/creator takes the back seat and the creation hogs the limelight. Who built Taj or why was it built are of no consequence after 400 years when the structure is universally regarded as India's iconic building/mausoleum. When we talk about the nation and take so much pride in being an Indian, does it really matter why Shahjahan built it and what was his actual objective? This is grossly unfair and completely unjustified. But who cares in this BJP-ruled India when every second Hindu has become a militant citizen and every minister loves to spew venom against the Muslims.