National dish debate — a case against Khichdi, for Idli-Dosa

I don't understand who are those overenthusiastic people who want to make khichdi the national dish of India? First of all, khichdi is not an Indian or even a sub-continental dish. It came to India 2200-2500 years ago from China. Asiatic Society Bombay has a torn book written mainly in Cantonese and a few passages in archaic Mandarin (the modern Chinese). The book suggests that a khichdi-type dish from northern part of China was introduced to Indian palate by the silk-traders of China. It's worthwhile to mention that India and China had a very long history of mutual commercial and philosophical interests as Confucius and Laotse were very much influenced by ancient Indian philosophers and sages.

So it's better not to include and acclaim khichdi as an Indian dish, however Indian it may have become in over two millenniums. In other words, it's a plagiarized or borrowed dish!

Now come Idli-Dosa. Can any other dish of Indian subcontinent claim so much popularity and omnipresence like Idli and Dosa? Moreover, both are completely Indian sans any culinary influence of a foreign cuisine. Tandoori chicken is Iranian, Bengal's Rasgulla is of Portuguese origin, Roghan Josh of Kashmir came from Afghanistan, fish curry came from Burma, halwa (any type of halwa) came from Arab peninsula as Halwa itself is an Arabic word. Kabaab came from Turkey (kabaab is actually a Turkish word). The list is interminable.

So which dish is purely Indian and originated here on this sub-continent? Pat comes the answer: Idli-Dosa. Both the dishes are roughly 1000-year-old and have the stamp of originality that's typical Indian. The theory of Arab settlers bringing Idli to Southern India doesn't hold water any longer. It very much originated here in India.

Moreover, the ubiquitous presence of idli-dosa from Kashmir to Kanyakumari makes both the dishes worthy contenders of becoming the national dishes. You can get it in any nook and cranny of India, though taste may differ according to the province's culinary influences.

The legendary British chef and culinary historian Gordon Ramsay called it an 'international dish' because of dosa's aesthetically unique texture and idli's cheeky (pun intended) smoothness. He opined that idli and dosa are the safest and tastiest foods conceived and conceptualized by humans. He further stated that an individual could survive on idli-dosa till death and the best thing about both is that they never taste dull and monotonous. One never gets bored with idli-dosa. You can eat it every day, yet will not get fed up! 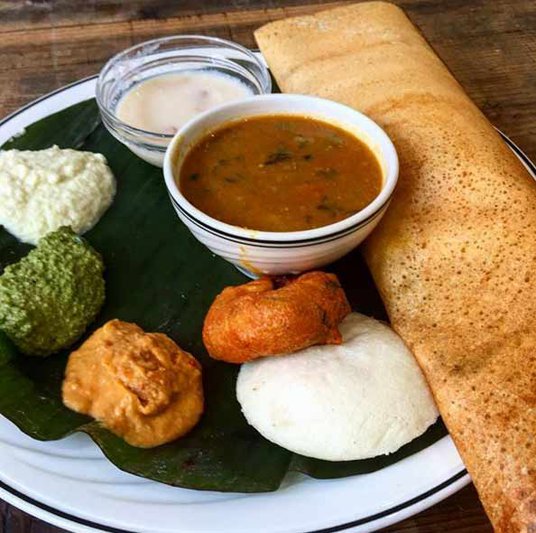 Lord Mountbatten requested C Rajgopalchari to send his Tamil cook to teach the nuances of making idli and dosa to his English cook. His wife Edna Mountbatten was very fond of idli and dosa and she herself learnt to make it from Jawaharlal Nehru's cook who was a South Indian from Madurai. 'Gone with the wind's' actress, Darjeeling-born Vivien Leigh had a masala dosa at perhaps the oldest South Indian restaurant on Park Street, Calcutta in 1932 and got hooked on to it. She never forgot its lingering taste.

Nehru's South Indian secretary M O Mathai mentioned in his book 'Reminiscences of Nehru Age' that Nehru's daughter Indira Gandhi loved to gorge on idlis and she never got tired of having the flattened rice balls with sambar and two types of chutney.

On my visits to neighbouring countries and even countries like Tunisia and Morocco in North Africa, I saw and had idli-dosa, though I also had seen the crocodile and baby-elephant meat filling in a dosa in an African country like Burkina Faso! The owner, an African, came to India in the late sixties to learn food-processing in Kochi and he innovated dosa in his own way when he went back to his country, though he didn't play ducks and drakes with idlis. Yours truly had the tastiest idli-dosa at a Malayali-Muslim migrant's restaurant in Chitral, the largest district in Khyber-Pakhtunkhwa province in Pakistan.

Moreover, Idli-Dosa is so affordable even in this age when every food item has become so expensive. It, therefore, stands to reason that Idli-Dosa must be declared India's national food. Its disarming simplicity along with the great taste make it a national dish.