Impact of violence and militarisation on Kashmiri children

Srinagar: An independent survey of the exact number of schools and educational institutions occupied by the security forces here has not been yet conducted, observed Jammu Kashmir Coalition of Civil Society, local human rights group, in its latest report “Terrorised: Impact of Violence on the Children of Jammu and Kashmir” (March 2018) and the government, it added, denied providing any such information citing no such data has been maintained. 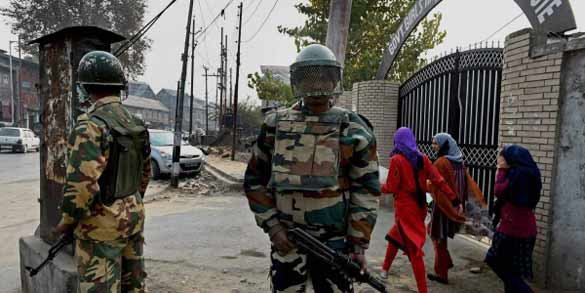 The report that provides an assessment of violence against children in the state during the past 15 years (2003 to 2017) mentioned that information regarding the number of schools and colleges currently occupied or vacated by security forces in the last three decades was not provided by Jammu and Kashmir School Education Department under JK Right to Information Act stating that no such data has been maintained. “The response and denial of information were shocking and even State Information Commission took a strong note of the denial of information and said that the Education department has been maintaining this data as the state government has constantly put in efforts to vacate schools and educational buildings occupied by the security forces.” In 2006 the report State of Human Rights in Jammu and Kashmir: 1990 to 2005 by Public Commission on Human Rights published a list of 46 schools and educational establishments occupied by security forces at that time.

“The large-scale militarization in Jammu and Kashmir in general and Kashmir valley in particular, has a direct impact on children’s unimpeded access to education as hundreds of schools and educational institutions have come under the occupation of security forces in the last three decades,” argued the report, adding that the presence of security forces in civilian spaces compromises not only the security of civilian population but impedes and restricts the safe and free access to education for children. The presence of army camps in the close proximity of educational institutions creates a scenario of human shields and the ramifications of the occupation of schools by security forces or the near proximity of educational establishments to nearest army camps and outposts are multiple, reiterated the report. Other than the threat to security, the close proximity of security forces camps around educational institutions makes children victims of surveillance and sexual violence and the 2016 sexual assault of the minor girl in Handwara is a case in point wherein the victim was assaulted just outside her school, the report added.

Schools, colleges and other educational institutions in the state have been used as military bases, interrogation centers and military posts, alleged the report, adding that “continued military use of schools in Jammu and Kashmir not only violates children’s right to education but also forces them to be in risk of sexual violence, surveillance and harassment at the hands of the security forces.”

The conflict has also affected the dropout rate of school going children in the state as the report State of Human Rights in Jammu and Kashmir (1990 – 2005) mentioned that there has been ‘an alarming increase in the dropout rate of the school going children mostly from 1st to 7th standard.’ The report further said, “…the dropout rate for Kashmir during the conflict recorded 57.41 percent for primary level students, 48 percent at the middle level and 25 percent at the matriculation and above level. In 1989, an estimated drop-out rate for Jammu and Kashmir recorded 55.11 percent for 1st to 7th standard, while as during the conflict the state average increased slightly (58.16 percent) but for Kashmir valley, it was 57.41 percent”. The dropout rate of school going and college going children had improved since then but the frequent incidents of violence have an adverse impact on the educational scenario in the state. At least seven schools came under the occupation of security forces in 2016 that witnessed a massive mass uprising following the killing of Hizbul Mujahideen commander Burhan Wani along with his two associates in south Kashmir on July 8.

The report stated that arson of schools has been a recurrent feature here. The year 2016, it said, saw an unprecedented targeting of schools in numerous arson attacks. The post-July 8 uprising that lasted for nearly six months saw burning of at least 35 school buildings across the Valley. The burning of schools triggered panic and the student community kept indoors, reducing the academic year to half. In almost all cases ‘unidentified persons’ carried out the arson of schools. While state government maintained that it had arrested some persons responsible for the burning of schools but no breakthrough in investigations has been made and the mystery behind the burning of schools still clouds the identification of the perpetrators, the report said. The arson attacks during the 2016 uprising were not limited to school buildings alone as at least 645 buildings were damaged in burning incidents during the period, it added.

Earlier report,State of Human Rights in Jammu and Kashmir (1990 – 2005) quoted a survey conducted in mid-nineties that more than 400 schools were gutted during the conflict and more than 60 percent of children between the age of 10 and 14 were deprived of education because of the conflict.

The report highlighted that incidents of violence against students, most of them children, were quite common during the nineties. As schools were occupied by security forces and military camps and outposts sprang around schools and educational institutions, the incidents of violence against students, which ranged from killings, beatings, and harassment to sexual violence, saw a rapid rise. “In the context of long-drawn conflict in Jammu and Kashmir, the violence against students becomes a normative exercise of the extensive use of force employed by the state to quell insurgency and dissent,” argued the report, adding that children have not been viewed differently by security forces. Quoting a case, the report mentioned that on 21 September 2002, the then Minister of the State for Tourism Sakina Itoo survived an IED blast at Mirhama in south Kashmir’s Kulgam district. The minister was on her way from Damhal Hanjipora to Kulgam and the IED blast occurred when the CRPF vehicle escorting the minister was passing by. One CRPF inspector was killed in the blast and five others injured. Soon after the incident the CRPF men barged into a nearby high-school and fired indiscriminately killing one girl, Naza Akhtar on the spot and grievously injuring others. The incident, the report said, is just one example among many illustrating how students have often become victims of the aggression of the security forces, often always during violent reprisal attacks against the civilian population.

The report observed that the twin mass uprisings in 2010 and 2016 saw an unprecedented rise in the state violence against civilians, especially children and students as 38 and 37 students were killed in these two years, respectively. “The state violence against students in Jammu and Kashmir comprises of targeted killings, extra-judicial killings, custodial killings and use of lethal and excessive forces during protest demonstrations leading to killings, beatings, and death due to torture,” the report said, adding the attack on students constitutes an attack on education and incidents such as security forces assault on students of Pulwama Degree College, which precipitated into a large-scale one-month long student protest in the valley, reflected that the student community has unquestionably suffered in the conflict. Thirty-eight incidents of violence against students were recorded from June 31 last year to March 01 this year, added the report.

The report recommended demilitarization of all educational institutions and play fields and other recreational spaces used by children and the state government should compensate the educational establishments burned during the conflict. It further demanded that the peaceful protest demonstrations organized inside or outside the educational institutions should not be criminalized and dealt with any kind of force and the state government should appoint a Committee to probe all grave violations against children under the framework of CRC: killing and maiming, recruitment and use of children, sexual violence, abduction, attacks on schools and hospitals and denial of humanitarian access and establish culpability. The Committee should comprise of experts from The International Committee of the Red Cross (ICRC), The United Nations Children’s Fund (UNICEF) and eminent jurists and the state government should adopt a policy, which is derived from the United Nations Convention on the Rights of the Child and other international laws for the protection and welfare of children so that it acts as a guideline for restricting the security forces from causing any physical and psychological harm to the children and Juvenile Justice Boards should be set-up by the government in each district of the state and ensure that no minor is detained under Public Safety Act (PSA).