Winners May Be Losers In Karnataka’s Catch 22 Endgame

It was what a film director would have described as a perfect take. “You are a beginner” says he, grinding his teeth in simulated anger. “These are your days to learn”. A measured pause; he emotes. “And you are insulting a former Prime Minister, a senior most leader?” This was Narendra Modi, straight from the Method school of acting. 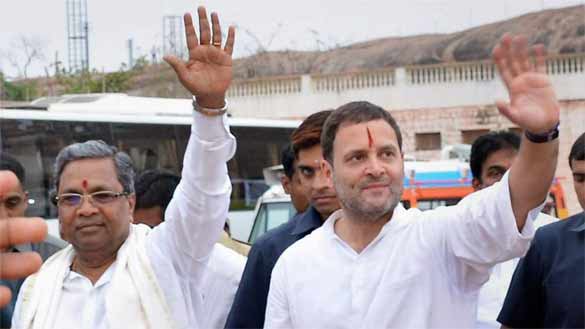 He was chastising Rahul Gandhi, the Congress President. In the course of a fierce three way election campaign, Rahul, prompted by Chief Minister Siddaramaiah, described the JDS as the B team of the Sangh Parivar. Modi tore into Rahul.

The manner in which Modi leapt to Gowda’s defence raised eyebrows. The outburst cast the JDS as a party which had BJP’s sympathies. Modi, at that moment, could have reached out and kissed Gowda.

If this creeping murmur reached Muslim enclaves which were once Congress vote banks, a section of the Muslim vote which would otherwise have travelled towards Gowda, would check itself. This would be ironical: the “S” in JDS stands for secular.

After the demolition of the Babari Masjid in 1992, the disenchanted Muslim vote, walking out of the Congress fold, was waylaid by regional parties. In Karnataka, this vote took respite under the JDS umbrella.

In these circumstances, is the Congress delusion, of being the “only” national alternative sustainable when a pan-Indian quantity like Muslims is permanently averse to it in the states? To overtly woo Muslims, Congress leadership has been advised, risks loss of Hindu vote in direct proportion to the saffron in the air. Congress avionics are now conditioned entirely by these weather conditions. Such abject dependence on the weather will have its logic. There will be occasion when the flight will not take off at all.

Now, the post-Babari shortfall has to be made up by holding on assiduously to the Hindu vote. This requires the kind of Hindu cohesion the Congress is not geared for. If it plugs upper caste hemorrhage, the lower castes flow out into regional receptacles.

It cannot do what the BJP does: pose the Muslim as the unstated “other” for Hindu consolidation. The Congress simply steers clear of the Muslim like one would steer clear of trouble. It differentiates itself from the BJP, though. It has a distinct self-image: it’s the party of “good Hindus”. It does not endorse the lumpenization associated with “street” Hindutva or the BJP.

It is a difficult pirouette. How do you project yourself as a squeaky clean Hindu without criticizing excesses in the name of the cow, love jehad, Muslim youth languishing and in jails without trial. National monuments like the Red Fort will now be handed to cement magnates for repair and maintenance and so on.

Alright, the BJP erects its “hard” Hindu  edifice “othering” the Muslims. How does the Congress delineate its “soft” Hindu outlines? Is there clarity or is it all hazy and vague?

Modi chastised Rahul for bad mouthing Gowda. Rahul found it so important to come clean on the subject that he agreed to give his very first newspaper interview since he became Congress President in December to Karnataka’s Deccan Herald group of newspapers.

He said he was not attacking Gowda at all; he was only inviting Gowda to explicitly declare whether he was on “that side or this side”. An epic ideological battle was on between the Congress and the BJP. Choose one.

What was the urgency for him to seek this clarification? In fact it is all the more puzzling because Modi’s intervention was designed to soften Gowda towards the BJP – it was like an olive branch to the JDS. If amplified, this would have the effect of the Muslim vote shifting away from the JDS towards the Congress. Why would Rahul need to neutralize conditions for this possible outcome? Well, it was a gamble. Rahul needs an outright victory with a safe margin. In a House of 224 he needs well in excess of 113 seats. Muslim support might help.

Conventional wisdom in Bengaluru gives Congress 95 to 100; BJP 85 to 90 and JDS 35 to 40 in a hung house. This is dicey – for the Congress. Deve Gowda, as kingmaker, will immolate himself but not make Siddaramaiah the Chief Minister.

The moment Rahul looks for an alternative to Siddaramaiah in order to keep Gowda in good humour, a new game will have begun.

If Congress wins outright, the credit must go to Siddaramaiah, whatever self-serving message the Congress coterie in New Delhi coaxes out of the result. In a state historically dominated by Vokkaligas and Lingayats, Siddaramaiah has brought under one umbrella the upwardly mobile Kuruba (Shepherd) community as one powerful group. By accepting a demand by a section of the Lingayat community (the late Gauri Lankesh for instance) that they are “outside” the Hindu fold, he has created mild disruption in the Veer Shaivite, Lingayat ranks. BJP’s Yeddyurappa, a Lingayat, will face that music.

By replicating, Jayalalithaa’s canteens, selling subsidized rice and pulling out every implement in the populist tool kit, Siddaramaiah has cast a wide net to ensnare the voter. At a time of Rahul’s frenetic temple hopping, Siddaramaiah’s irreligious, Lohiaite persona is refreshing.

What profit for Siddaramaiah to remain affiliated to the Congress if he sees regional actors play a greater role in post-2019 calculations? Who knows he may like to consolidate his regional base. Siddaramaiah is not the only one who is basically averse for a ride in a messy coalition just months before 2019. Supposing Modi calculates that Rajasthan, Madhya Pradesh and Chhattisgarh can be bunched with 2019 to his advantage. That is why any long-term player will not be enthusiastic about the unstable Karnataka gaddi. But the eager bearer son of Deve Gowda, H.D. Kumaraswamy, is aching to ascend the throne even for a few months with BJP support, Gowda’s denials notwithstanding.

From the Bengaluru throne, the Gowdas, BJP, everybody will then train their guns on Siddaramaiah. It is Catch 22 for all.