Karnataka: Battleground for the Soul of India!

By Fr. Cedric Prakash SJ 08 May 2018
Karnataka elections is no longer about an impartial look at this or that national political party. It is about a more subjective and passionate look, at the future of India. To defeat the party that says "we are here to change the Constitution".

The ‘soul’ of India is in essence everything that makes up the greatness and wealth of India! From  ancient history so vividly exemplified by the Mohenjo-Daro and Harappa civilizations to the ‘temples of modern India’ so poignantly put by the statesman and first Prime Minister Jawaharlal Nehru; from the pluralism of religions to the diversity of cultures; for centuries India has been a gastronomical delight serving every taste bud; the sheer variety in our dress, film, dance, song, literature, languages put entire continents to shame; from the grandeur of the Himalayan range to a coastline , the length of it few countries possess, to forests rich with flora and fauna and bio-diversity at large; from visionary leaders like Gandhi and Ambedkar to  courageous human rights and  free speech defenders; from a Constitution which has its core values in justice, liberty, equality and fraternity for all to the ‘idea of India’ which millions want to treasure and mainstream! All this and more embody the ‘soul’ of India! 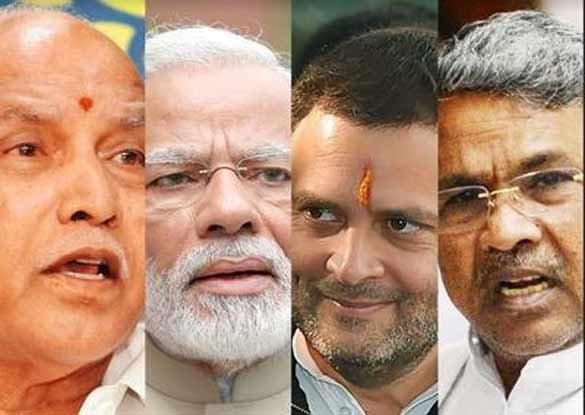 In the recent past, this ‘soul’ has been ravaged, raped, corrupted, criminalized, communalized, and manipulated in every possible way.  Perhaps never before there has been such an urgency to restore the essence of this soul; to enhance it; and not to leave it to fascists with their single-minded agenda of destroying it. Karnataka is today a battleground: a modern day Kurukshetra. Come 12 May, the elections in the State will witness the ‘battle for the soul of India.’

Social media is bursting with messages, videos and cartoons; analysis and comments, about the Karnataka Elections. Several of the mainstream media have taken sides on expected lines. There are already some ‘polls’, forecasting the ‘end results’. There is a powerful Kannada video (FB/YoungINDYI), with English subtitles, which has gone viral! The message is loud and clear “what we eat; what we wear; who we love; what we say: Should be our right!” It is a video worth watching and sharing.  It is all about how some fascist elements have taken law and order in their own hands. The outcome of the Karnataka elections will not only impact the soul of the country but will also define the India of tomorrow; besides, it is bound to have far-reaching consequences for the General Elections of 2019.

Recently (3 May) all major Indian channels highlighted the fact that Prime Minister Narendra Modi shared the stage in Bellary with Gali Somashekhara Reddy, who is the BJP candidate from the area. Known as the ‘Reddy Brothers’, Somashekara and his two siblings Karunakara (also a BJP candidate) and Janardhana( who is actively campaigning for the BJP)are regarded as some of the most corrupt persons in India. It is common knowledge that all three have amassed an incredible amount of wealth (estimated to be at least 35,000 crores) through large-scale illegal and rapacious mining across the iron-ore-rich district of Bellary. All three brothers were lawmakers and Ministers when the BJP ruled Karnataka some time ago.

The PM thus sent an unequivocal message to all: the BJP will do anything to win the battle for the soul of Karnataka in the forthcoming elections, on 12 May. In the past, as a smokescreen, in the run up to elections in some States, they cleverly played the ‘development’ card. This time however, they have thrown all caution to the wind- neither development nor environmental concerns matter any longer. The writ of the Reddy brothers with their money and muscle runs large in certain areas of Karnataka. Besides, choosing the scam tainted 75-year old Lingayat leader B.S. Yeddyurappa as the chief ministerial candidate of the party proves, that there is no one in the country, to rival the BJP in corruption. It is significant that the Association for Democratic Reforms (ADR) in a recent report state that out of the 224 BJP candidates standing for elections in Karnataka 83 of them (37%) are those with a criminal background.

In Karnataka, the BJP-supported right wing elements are doing all they can to destroy the sanctity and the rights guaranteed to every citizen by the Constitution. The State for years has been the bastion of the Congress and other secular parties, but in June 2008, the party won the State elections. There has been a downslide ever since. In September 2008, Christians and church institutions were attacked in Mangalore and other places across the State. Over the years, the BJP (even as opposition) has also played their communal agenda to the hilt, effectively dividing the people on religious and caste lines.

In the run-up to the elections, it was common knowledge that the right-wing elements were buying up people from different sections of society, just to split the votes of the other parties. The ‘demonetization’ heist foisted by them on the nation provided them and their crony capitalists a windfall. Therefore, they do in fact have plenty of ‘black money’ to buy up unsuspecting people and to continue with their divide-and-rule strategy. A young ambitious Catholic doctor from Mangalore, who felt that the Congress had no time to ‘listen’ to him – very candidly said recently that the BJP has offered  him a ‘ticket’ for the next elections. Of course, they will do so! They will also make sure that this ‘Christian’ will be made to stand from a constituency from where he is bound to lose; but would help in dividing the votes.

Freedom of speech and expression, has also taken a severe beating in Karnataka. The fascists have left no stone unturned to throttle anybody who takes a stand for justice and truth or for that, matter thinks differently. On 30 August 2015, eminent intellectual Prof. M. M. Kalburgi was brutally murdered in Dharwad. On 5 September 2017, journalist-activist Gauri Lankesh was gunned down. Both Kalburgi and Lankesh were highly critical of the Sangh Parivar.

In 2015, Professor B.P. Mahesh Chandra Guru, dalit intellectual ( also a professor of journalism) offered an interpretation of the Ramayana, in which he said Ram was guilty of misogyny when he banished pregnant Sita to live alone in a forest. He used the Kannada word 'alemari' to describe Ram. Guru says, "I meant he was 'nomadic' or 'wandering’”. Eighteen months later, Guru spent eight days in a Mysore jail after some functionary (who was not present at the lecture) of a Hindutva group ‘Karunawu Sarvodaya Sene’, took offence at Guru's speech and filed a police complaint, claiming that his Hindu religious sentiments were hurt, since Guru called Ram a "loafer". At first, Guru’s bail plea was rejected and he was released only after he spent over a week in prison. Today Guru continues speaking out vehemently against those forces who trample ‘freedom of speech and expression’ and destroy the intellectual fibre of the country.

Mangalore will never forget  24 January 2009 when a group of goons belonging to another extremist outfit the ‘Sri Ram Sene’  barged  into a pub, beat up young women and men, screaming at them for having “loose morals”. The group claimed that the women were violating traditional Indian values. Two women were hospitalized for the injuries they sustained. However, after more than nine years, a lower court in Karnataka on 13 March acquitted twenty- six of the attackers including the founder of the group, Pramod Muthalik for ‘want of evidence’. This was indeed a travesty of justice. There is ample amount of video evidence to show how blatantly the goons had carried out the attack. Fortunately, a group of concerned citizens, ‘the Citizens Forum for Mangalore Development’ has launched a massive campaigndemanding that the state government appeal the ruling so that the cause of justice is served and the attackers are suitably punished.

The ‘Sene’ over the years, with  due patronage from the BJP/RSS combine, have arrogated on themselves to be the sole custodian of  ‘Hindu Culture’ They have made ‘love jihad’ their main objective, attacking any couple in love, who belong to ‘different’ religions. In 2012, a group of them attacked a party of youngsters enjoying inside a private guesthouse in Mangalore and manhandled them, accusing them of indecency and violating Indian culture, all this, while mishandling and reportedly molesting the women themselves.

Last June, the ‘Sene’ made its opposition to an iftar hosted inside the ancient Udupi Sri Krishna temple by the head of the Pejawar Mutt, Sri Vishvesha Teertha Swamiji, and called for a statewide protest against it. The outfit couldn’t swallow the bitter pill that at a time when their ilk the  Hindutva forces were galvanizing themselves across the country and cow vigilantes were making headlines nearly every month, the Swamiji had invited both Hindus and Muslims to promote communal harmony.

The elections in Karnataka is no longer about an impartial, objective look at this or that national political party. It is about a more subjective and passionate look, at the future of India. When Union Minister Anant Kumar Hegde said on 25 December 2017, in Bangalore, “we are here to change the Constitution”- only a very few would have thought that he was talking through his hat. A victory for the BJP in Karnataka would be a significant step closer towards the realization of their main goal. On some other points there might be little to choose from the two major parties. However, on the point of the Constitution, on the diversity of the country and on the pluralistic, secular fabric of the country, there can be very little doubt, on who is on the side of the people of the country. Karnataka today is indeed a battleground: for the soul of India!