How many more will be killed by India's 2019 General elections?

I’m left aghast at the killings taking place in developed India! If one were to focus on the state of affairs in Uttar Pradesh, it is the state police that has been indulging in killings out there in the open. It is State terrorism! Quoting these figures from the PUCL findings on encounters taking place in Uttar Pradesh: Since March 2017, 49 people have been killed in over 1,100 encounters. More than 370 have been injured and over 3,300 arrested across the state.


The Union minister for aviation, BJP's Jayant Sinha son of Yashwant Sinha, on 6 July garlanded and hand-fed sweets to men convicted for murdering a Muslim meat trader after they were given bail by the Jharkhand High Court on June 29. Impunity, appreciation and rewards in store with killers as usual. 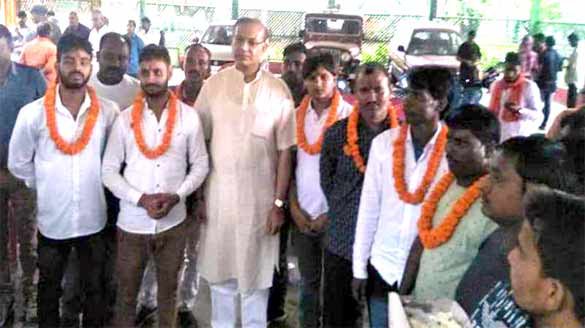 And those not killed by the State machinery are getting lynched by the well-trained and well-nurtured goons. After all, if full-fledged training camps are running under the several right-wing banners to target the ‘other’, there is bound to be violence. What else will the ‘trained’ men and women do but to lynch and destroy structures, human and otherwise. I have been told by several villagers in Uttar Pradesh that if they are not connected to the ‘shakhas’ and with that not close to the ruling mafia, they will have little chance of getting protection and much more along the strain.

Today, of course, lynching and killings are spreading out to the other states of the country. There is a clear and apparent pattern to them. There is a direct connect between the killings and the hateful violence spreading out. Alibis could range from child-lifters to cow-killers, but the end result is killing of humans as never before.

Mind you, this state of anarchy could pave way for more violence as two factors loom large: not just the upcoming general elections of 2019 but also the fact stands out that till recently the masses were sitting somewhat subdued, awaiting for miracles to happen on the social and economical fronts, but with worsening conditions there is not just frustration but complete disillusionment with the State and its machinery. With dismal figures on the very basics -- roti, kapda , makaan, justice and fair play -- the masses are sitting hungry and angry. Quite obviously, they cannot unleash their anger on the political mafia as today’s political creatures move around in big-bodied vehicles complete with frilly security bandobast, so they are catching hold of just about any two-legged creatures coming their way.

In fact, why just the humans, today even trees are not spared. One can imagine what must be taking place in rural locales, when in this capital city, New Delhi, trees are getting cut and chopped. Mind you, not by the land or forest mafia but rather too officially by the sarkar! Why? To build new homes for its sarkari men. Yes, at the cost of murdering thousands of trees, right in front of our eyes. Strange ironies and bizarre arguments hit. On one hand reports hold out that at least nine lakh trees ought to be immediately planted in and around the capital city to save the city’s residents’ lungs (whatever remains of their breathing apparatus!), yet this government seems hell-bent on killing existing trees…over 16,000 trees are in the cutting line!

What better can be expected when we have ministers like the Union Minister of State for Housing and Urban Affairs, Hardeep Singh Puri, who all too naively stated, ‘For every tree that is cut we will plant 10 trees…Green cover will go up by three times after re-development of seven colonies in South Delhi.’

Minister Puri should be aware of the basic fact that trees don’t grow overnight! Nor in accordance to political commands! Trees are not made of synthetic ingredients that they can be made, rather made up, according to ministerial wants and dictates and order. Of course, they can be axed by a governmental order or they can be killed in slow, steady and horribly polluted atmosphere spreading around but they cannot be forced to grow in a jiffy. Nah, none of your modern day techniques can turn saplings into trees in a fast paced way! They follow Nature’s way and cannot be controlled by the political powers.

Correct me if I’m wrong but kings of the centuries gone by were far more aware of the role of trees in the very upkeep of the environment. Here I must mention this incident which is perhaps enough to relay Mughal Emperor Aurangzeb’s concern for trees. During Aurangzeb’s rule, Srinagar’s Jama Majid and its outlying complex were gutted in a fierce fire …in this fire Chinar trees growing in the outer complex were also affected. When the news of the fire reached Emperor Aurangzeb he was more worried and concerned about the Chinar trees’ safety than about the masjid. His rationale that the masjid could be re-built within a few years but the Chinar trees will take decades to grow.

Yes, worries accelerate as 2019 nears. How many more will be killed in the coming months by the political mafia? What more political distractions will be fitted in to distract the public from hunger and joblessness?

What more havoc will the power-hungry politicians indulge in, in the Kashmir Valley and elsewhere? Going by the latest reports the politicians are not ready to give up their dangerous games in the Valley.

If, in the context of the encounters taking place, particular locales of Uttar Pradesh are described by activists as ‘killing fields of Uttar Pradesh’, then it’s about time to describe the Kashmir Valley as a place where the politicians are ongoing with their deadly designs. One news report after another of the killings taking place in the Valley, might shock you and me, but not the thick-skinned politicians of the day.