What should be said about cow-lynching cases targeting Muslims periodically? It is difficult to accept that these incidents are really directed towards display of religious reverence held about cows. If this was really so, India would not be witness to numerous cows feeding on garbage and plastic bags in many areas. Hardly any importance appears to have been given to many of these being extremely thin, almost skeletal beings. Yes, there do exist several “cow-shelters” called gau-shalas but there is need for more. At least, this is suggested by numerous, almost half-starving cows moving on roads in the capital city. Now, it is intriguing, though great importance appears to have been given by those “displaying” religious linkage with this sacred animal to lynching of Muslims, practically none seems to have been given to taking better care of cows. 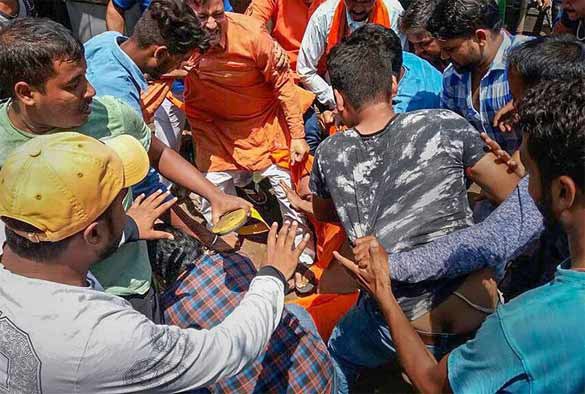 Killing Muslims or just anybody can play no role in helping improve health of cows. Besides, to presume that assassination can be accorded a religious colour is totally erroneous. It is nothing but inhuman. This naturally raises the question as to what really are these activities targetting? It is clear, while the name of “cow” has been used to target Muslims, several non-Muslims have not been spared - though without referring to cows. The recent incident in which Swami Agnivesh was assaulted is just a pointer in this direction.

It is indeed an irony that while primarily poor Muslims have been targeted in cow-lynching cases, the non-Muslims attacked include well-known and well-placed secular individuals. These include Swami Agnivesh and journalist Gauri Lankesh who was assassinated. What does this suggest? Clearly, religious-label is deliberately tagged while targeting poor Muslims. The basic idea is apparently to earn publicity from these incidents and also spread “propaganda,” even though it may be based on false news, about these targeted Muslims indulging in acts which hurt religious sentiments of Hindus. This also implies that cow-lynching cases, targeting Muslims, seem to be deliberately politically motivated for the polarisation of Hindu vote-banks. Also, these appear to be a part of Hindutva-campaign having been promoted for long by the saffron brigade. There prevails a perception that spread of such anti-Muslim “news” is likely to turn “Hindus” against them, which is apparently associated with “Hindu-vote” favouring the saffron-brigade.

The preceding point has been deliberately made to draw attention to the hard reality that cow-lynching cases, targeting Muslims, should stop being linked with the religious fervour of the accused. Equally important is the fact, as suggested earlier, inhuman, brutal incidents would not have occurred in the name of religion. Also, these incidents are not suggestive of any case having ever been earlier filed against targeted Muslims over the cow-issue and/or any investigation having been pursued against them. Clearly, they appear to have been targeted for no fault of their only for the sake of cheap politico-religious publicity desired by elements who chose to attack them. What else can this be described as but cheap, totally unethical and irreligious publicity aimed for by certain sections.

It may not be wrong to assume that Muslims have been deliberately targeted to instill “fear” and also “anger” in this community spread in different parts of the country. Perhaps, greater importance should be given to the “anger” aspect. The element of “anger” assumed to be aroused in the targeted community and also the majority – over the religious factor – has been expected to lead to communal tension probably throughout the country. This stage has not yet been reached. And this probably explains a sense of desperation among extremist elements playing the key role in prompting their associates to target fairly well-known, secular personalities. What else can be said about the manner in which Swami Agnivesh was assaulted recently? Probably, his saffron attire - which is not linked with saffron brigade - spared him his life.

The key factor that needs to be taken note of in cow-lynching cases and also attack of “secular” personalities is “desperation” of the elements promoting these. Had apparently they not reached a point of desperation and were genuinely concerned about cows from the religious angle, they would have paid greater attention to feeding stray cows, construction of more cow-shelters and so forth. Also, rather than take law and order in their own hands, they would have given at least some importance to filing cases against individuals – whether Muslims or non-Muslims – suspected of abusing their sacred animal. These steps seem absent. Well, the main elements behind organisation of cow-lynching crimes and other cases are well aware that these steps are least likely to earn them any publicity. So for the sake of instant coverage, they have chosen to now and then target Muslims, without their alleged crimes having been proved legally.

Where attacks on well-known “secular” personalities are concerned, the message is simple: try and silence them as well as others bearing similar secular views. This stage has also not been reached. Rather, the reverse is happening, target-cases of both kinds are receiving strong criticism in media circles throughout the country!