India and Pakistan are once again on the verge of a full-scale war in the aftermath of India’s annexation of disputed Kashmir territory. It is an unimaginable scenario as the two South Asian neighbors possess high-tech nuclear arms. 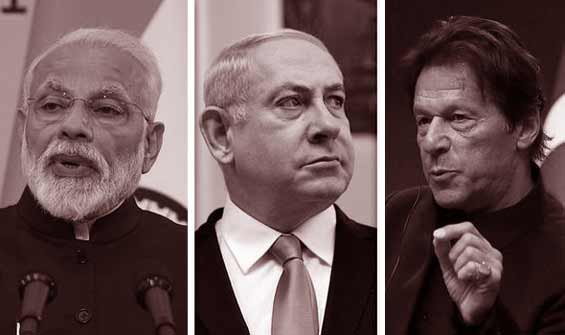 Political analyst Dr. Shahid Masood said on Saturday (August 17) as India and Pakistan are edging towards a military confrontation we don’t name another entity in the equation that is Israel which has strategic relations with India. “Israel has participated in India-Pakistan military confrontation in February this year,” he said.

It may be recalled that an Indian Air Force aircraft was shot down by Pakistan and the captured pilot was immediately repatriated to India by Pakistan as a goodwill gesture. At that time there were rumors that an Israeli pilot was also captured.

Dr. Shahid Masood recalled that in 1980/81 India and Israel planned an attack on Pakistan’s nuclear facilities at Kahuta, near Islamabad.

He went on to say that Pakistan’s Shaheen-III Missile with a speed of 2750 km per hour can reach Israel within 13 minutes. “The missile will pass through Iran, Iraq and Jordan which don’t have any anti-missile system to stop the missile….Pakistan is the only country with a capability to hit any Israeli town.”

Lt. General (Retired) Ghulam Mustafa said in a TV show on Sunday (August 18) that Shaheen-III Missile’s speed is more than 2750 Km per hour. It is Mach-8, meaning the missile travels eight times faster than the speed of sound.

Earlier, in September 2014, after meeting with Modi in New York, Israeli Prime Minister Benjamin Netanyahu told the Jerusalem Post “"sky is the limit" for relations between the two countries.

On Netanyahu’s visit to India in January 2018 Harsh V. Pant, Head of Strategic Studies Program at the Observer Research Foundation in New Delhi, wrote that there is now domestic consensus in India that strong ties with Israel are essential for Indian national security interests.

Israel has now become an important defense supplier for India. The two countries signed an air and missile defense deal worth almost $2 billion in April, 2017 in what Israel termed the "largest defense contract deal" in its history.

According to Hindustan Times, Israel is among the top three to four arms suppliers to India with sales ranging from Phalcon AWACS (airborne warning and control systems) and Searcher, Heron and Harop UAVs (unmanned aerial vehicles) to Aerostat and Green Pine radars, Barak anti-missile defense and several types of missiles and laser-guided bombs.

In November 2017, India participated in the Blue Flag exercise in Uvda Air Force Base in southern Israel for the first time, where it sent its elite Garud Commando Force and a Hercules C-130J plane from its "Veiled Vipers" Squadron. Indian and Israeli special forces conducted a range of tactical joint exercises, which included protection of strategic assets, ground infiltration and evacuation.

The mandated role of Garud Commando Force, whose motto - ‘Defense by Offence’ - matches closely with the task assigned to the special units of the Israeli Air Force.

Tellingly, in 2003, Rediff reported that in September 1968, when the Indian intelligence agency Research and Analysis Wing (RAW) was founded with Rameshwar Nath Kao at its helm, the then prime minister Indira Gandhi asked him to cultivate Israeli intelligence agency Mossad.

After successfully destroying Iraqi nuclear reactor in 1981, Israelis planned a similar attack on Pakistan`s nuclear facilities at Kahuta in collusion with India in the 1980s. Using satellite pictures and intelligence information, Israel reportedly built a full-scale mock-up of Kahuta facility in the Negev Desert where pilots of F-16 and F-15 squadrons practiced mock attacks.

According to `The Asian Age`, journalists Adrian Levy and Catherine Scott-Clark stated in their book `Deception Pakistan, the US and the Global Weapons Conspiracy`, that Israeli Air Force was to launch an air attack on Kahuta in mid-1980s from Jamnagar airfield in Gujarat (India). The book claims that “in March 1984, Prime Minister Indira Gandhi signed off (on) the Israeli-led operation bringing India, Pakistan and Israel to within a hair`s breadth of a nuclear conflagration”.

Another report claims that Israel also planned an air strike directly out of Israel. After midway and midair refueling, Israeli warplanes planned to shoot down a commercial airline`s flight over Indian Ocean that flew into Islamabad early morning, fly in a tight formation to appear as one large aircraft on radar screens preventing detection, use the drowned airliner`s call sign to enter Islamabad`s air space, knock out Kahuta and fly out to Jammu to refuel and exit.

According to reports in mid-1980s this mission was actually launched one night. But the Israelis were in for a big surprise. They discovered that Pakistan Air Force had already sounded an alert and had taken to the skies in anticipation of this attack. The mission had to be hurriedly aborted.

Pakistan reminded the Israelis that Pakistan was no Iraq and that PAF was no Iraqi Air Force. Pakistan is reported to have conveyed that an attack on Kahuta would force Pakistan to lay waste to Dimona, Israel`s nuclear reactor in the Negev Desert. India was also warned that Islamabad would attack Trombay power plant if Kahuta facilities were hit.

The above quoted book claims that “Prime Minister Indira Gandhi eventually aborted the operation despite protests from military planners in New Delhi and Jerusalem.”

McNair`s paper #41 published by USAF Air University (India Thwarts Israeli Destruction of Pakistan’s “Islamic Bomb”) also confirmed this plan. It said, “Israeli interest in destroying Pakistan`s Kahuta reactor to scuttle the “Islamic bomb” was blocked by India’s refusal to grant landing and refueling rights to Israeli warplanes in 1982.” Clearly India wanted to see Kahuta gone but did not want to face retaliation at the hands of the Pakistan Air Force. Israel, on its part wanted this to be a joint Indo-Israeli strike to avoid being solely held responsible.

Shimon Arad, a retired colonel of the Israeli army, wrote in February 2018,thatthe growing security relationship between Israel and India, serves to enhance conspiracy theories about the existence of an Indo-Israeli alliance against Pakistan. “Thus, unsurprisingly the recent visit by Israel’s prime minister to India in January 2018 produced a bellicose Pakistani response. The foreign minister, Khawaja Muhammad Asif, stated that Pakistan could defend itself “despite this nexus between India and Israel” that is based on their enmity with Islam. Israeli Prime Minister Benjamin Netanyahu wisely reacted by stating that “We (Israel) are not enemies of Pakistan and Pakistan should not be our enemy either”.”

>From a military perspective, the Israeli-Indo security relationship and the modernization it brings to the Indian armed forces is understood by Pakistan to create vulnerabilities in fundamental military areas undermining the conventional balance of power in South Asia, he said adding: “This security relationship is perceived to have provided India with substantial advantages in the modern aspects of  warfare such as: network-centric and electronic warfare capabilities; intelligence and information dominance; day and night maneuverability; long-range modern strike capabilities from the air and the sea that threaten Pakistan’s strategic sites and assets; and antiballistic missile defense systems that improve India’s ability to defend against Pakistani missiles.”

Pakistan has successfully tested the Shaheen-III intermediate-range missile which has a range of approximately 2,750 km, designed to reach the Indian missile bases on the islands of Nicobar and Andaman, hesaid.“Depending upon the missile’s placement, it could be capable of hitting Israel. It is assumed that Pakistan has been successful in miniaturizing nuclear warheads and therefore, once fully operational, the Shaheen-III will be nuclear capable.”

“As their military relevance to each other becomes more significant, Israel-Pakistan relations are at an inflection point. Given their inability to openly engage with each other, a credible back channel of communication between Israel and Pakistan is of growing importance in order to temper possible misunderstandings, miscalculations or malicious attempts to artificially increase tensions between the two countries,” Col. Shimon Arad concluded.