New Delhi: Jamaat-e-Islami Hind (JIH) launched a multi-lingual Islamic video portal, a collection of Islamic clips and videos for spreading the message of Islam, on 30 May at the at Indian Law Institute, New Delhi. The website (www.islamic-videos.com) was inaugurated by Maulana Muhammad Jafar, JIH’s Vice President (photograph below). While delivering his presidential speech, Maulana Jafar said, "Present media is mainly playing a negative role but media itself should be used positively to propagate good moral values. Every citizen has the freedom of expression but it is not meant a licence to use sacrilegious and uncivilized language against other communities or personalities. If you do not agree with others’ views, you can express your views in a positive way, he said. Speaking on the occasion, guest speaker, Dr. Zafarul-Islam Khan, Editor of The Milli Gazette, offered a brief history of the gradual progress in the field of media. He emphasised on the Muslim community’s duty to use modern media to put across its views. He appreciated JIH for using this medium to publish useful publications in various languages. 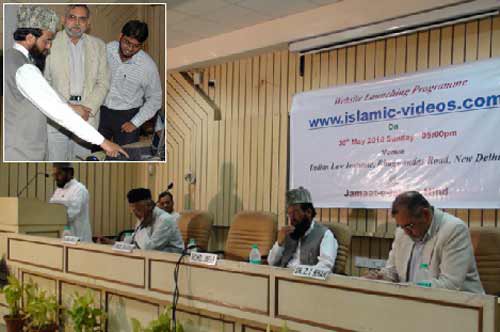