Android 5.0 "Lollipop" is the latest version of the Android mobile operating system developed by Google. This November it became available for select mobile devices that run distributions of Android serviced by Google, including Nexus.

If you use Nexus mobile phones, you will find the lollipop update refreshing. Its user interface is built around a responsive design language referred to as "material design". Other changes include improvements to the notifications, which can be accessed from the lockscreen and displayed within applications as top-of-the-screen banners.

But the feature which believing men and women will like the most is the feature of controlling "interruptions". Imagine you remembered to put your phone on silent while entering the Masjid. In the middle of the prayers, a calendar alarm you had set ticks off causing embarrassment. [If this ever happens one should immediately take out the phone and switch if off instead of let it go on and continue to disturb everyone]

Another problem is to see so many missed calls an hour after your prayers, as you forget change the phone mode back to normal from silent and you have call back and tell everyone that for namaaz you had put your phone on silent. This doesn't sound well. Good deed better be between you and God.

So if you have a Nexus, after updating the system to Android 5.0 Lollipop, the first time you change the volume on your device you're likely to notice a few new options just below the volume slider. 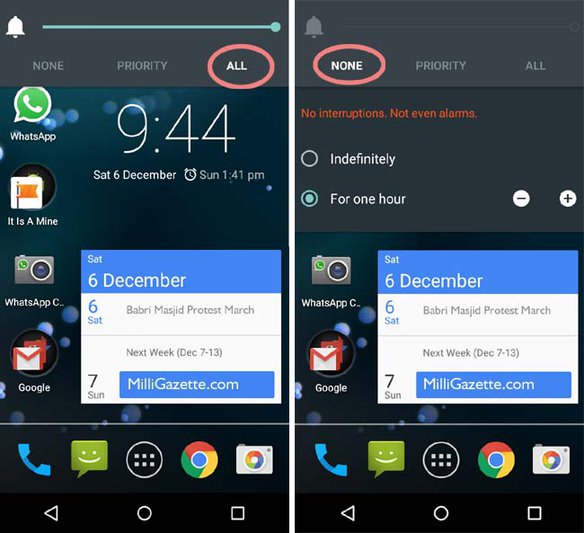 The options are part of a new feature called Priority mode. Similar to Do Not Disturb found on various platforms and devices, Priority mode will silence alerts based on various settings of your choosing -- allowing only the most important alerts, or Interruptions, to get your attention.

So next time you want zero interruptions for pre-defined period, you know how to do it. The interruptions can be stopped for a minimum of 15 minutes which ideal for namaaz. You can set it to 45 minutes to stay through Jumuah sermon.