The Milli Gazette Online 20 Mar 2015
Experiencing solar eclipse in Germany, realized how rich we are in our belief and culture as an India.

Castrop Rauxel - Germany (20 March 2015): As the day began I was so excited that I could experience the solar eclipse today recollected my mother’s instructions finish the breakfast and coffee before the solar eclipse starts and rushed to the kitchen to get my coffee I peeped outside the window and what is see huge fog around all my excitement was blown off just like the wig gets thrown of when the fan is switched on near the person wearing it! swissshh it blew off all my excitement, no wonder my virtual life around me I can watch it online with good links, have internet as well electricity not to worry about it right? 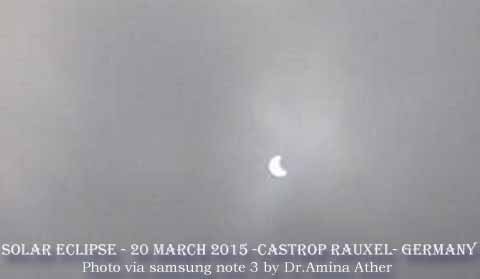 This reminded me about the total solar eclipse on October 24, 1995 which we experience in Bangalore, the school holiday on that day and one day before auto speakers asking us not to look at the sun directly and everyone home the street outside completely deserted and all glued to the television set those were the days where it was enough from the television set all glued to one channel and waiting to see it though the television, it was total eclipse in Bikaner Rajasthan and we had live telecast on Doordarshan [National TV Channel] and interesting part was advertisements in between the telecast if I recollect now the advertisement of Horlicks which says it had vitamin D boosters in it why does an Indian need vitamin D booster when we have so much of sun light and high content of vitamin D in it? Well that was not the thought of it at that moment all was the worry and concentration that the electricity does not go off at the right moment when there is totality unfortunately it went off complete switch off now the fun, it was almost like evening darkness outside in the street and all of a sudden the birds started a unique kind of sound especially crows starting loud cries and the dogs continued and then cats joined them it was an orchestra of all these sound and we were just to be at home, then we decided that we see the sun though X ray files at home through water kept in the tub outside the house, it was a pleasure doing it no electricity good we enjoyed the moment and then the experience was unique in itself, I could not stop remembering these little things but a unique part of our life, and here we have electricity and internet now we can watch right from our hand phone / mobile phone no problem technology has advanced so much I watched though my hand phone and tried to take some clicks  peeping through the fog around even though I could not see it complete when it was maximum the birds started to creep from one tree to the other in a confused manner and this was the sign when it meant it was maximum of 84% at Castrop Rauxel, even with this technology however advance we are no one in my campus had a feeling of the solar eclipse occurrence, the birds felt it have we talking animals (haivan-e-natiq) as so called by Avicenna have lost the sense of the environment we are living in or we are dumb founded and have selective deafness in this emerging technological world where the emotions are also fading off just like the technology is raising may be we would need a gadget to understand even if we are sad or happy as an alarm.

Now what after the completion of solar eclipse we all prayed all the worship places the temples, mosques and churches had special prayers that day and all of them prayed and then  took their meals and took water, what was that a thankful for what we have and submission toward the supreme power for what we are getting, the mosque had a special sermon that day after the eclipse and mass prayer was held women also prayed at home and information was given as how the prayer was to be offered and which are the verses to be recited during the prayer, the next day   my Hindu friend also shared that they too had a different prayer  which was like a prayer to sun god, what was all this a submission to supreme power but I do not even see a minor section of this submission here, yes there was a solar eclipse let us see how much of solar power was generated during this or what new scientific innovation was created today was the reply of my colleague, I was wondering what a huge turnover of the thoughts  is this the difference what east had with the west or is this the competition of technology with spirituality or race to be the best in the world.

When birds could understand the changes in the air where they live and fly why not we humans could feel it as we breath the same air, what is the difference of east and the west where the east saw it as a spiritual inference and west viewing it as technological innovation. A thought which leaves me with a question which I had it as a kid did the moon eat the sun?