It’s very pleasing to know that a major breakthrough happened in the global biological science research and innovation of a life-saving vaccine has Bihar connection. Dr. Mumtaz Naiyer, a postdoctoral scientist at University of Southampton, UK originally hailing from Kishanganj (Bihar) with his team has made a significant discovery in efforts to develop a vaccine against Zika, dengue and Hepatitis C viruses that affect millions of people around the world. In a study published in Science Immunology, researchers have shown that natural killer cells (NK cells), which are a fundamental part of the body’s immune system, can recognise many different viruses including global pathogens such as Zika, dengue and Hepatitis C viruses, through a single receptor called KIR2DS2. 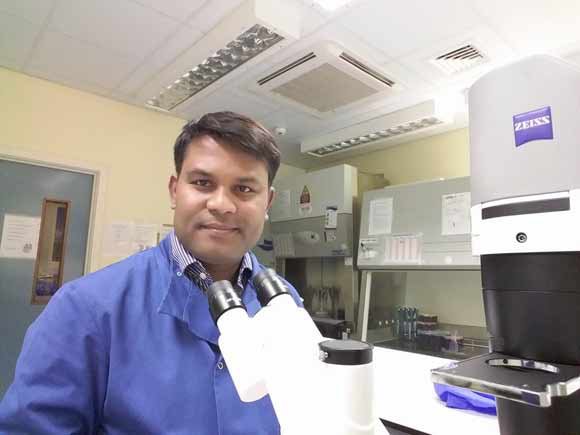 A native of Thakurganj (Kishanganj), Dr. Mumtaz Naiyer, the first author of the paper, said: “This is a well-presented study and a significant advancement in this field that identifies the important role of the receptor KIR2DS2. Since I come from India, which has thousands of cases of dengue each year, I can understand the suffering of patients with dengue. Nothing would give me greater pleasure than to ease the suffering of these dengue-affected patients.”

The study, which was funded by the Wellcome Trust and the Medical Research Council, analysed DNA from more than 300 patients exposed to the Hepatitis C virus, which showed that the KIR2DS2 receptor was associated with successfully clearing the virus.  The team then identified that the immune system targeted the NS3 helicase protein of this using the receptor and found that it prevented the virus multiplying. They went on to demonstrate that this same mechanism could be important for many different viruses for example the Zika and dengue viruses, which also contain a region within their NS3 helicase protein that is recognised by the KIR2DS2 receptor.

The researchers now need to determine whether these KIR2DS2+ NK cells are protective during acute flaviviral infections, and are hoping to develop a vaccine that targets natural killer cells.  They believe that a similar process could be used to target cancer.

Lead researcher Salim Khakoo, Professor of Hepatology, said the findings are very exciting and could change the way viruses are targeted by vaccines but warned that the research is still at an early stage, and animal studies/clinical trials will be needed to test the findings.

Professor Khakoo added: “Cancer treatments that use the body’s own immune system are becoming more common. Our findings present a completely new strategy for virus therapeutics which could be easily translated into the field of cancer. The next few years are going to be very exciting in this field.”

The research paper can be accessed by here: http://immunology.sciencemag.org/lookup/doi/10.1126/sciimmunol.aal5296