Muslim Law Board has no plan to meet PM: Rabey Nadwi

Ahmedabad: Maulana Syed Muhammad Rabey Hasani Nadwi, President of the All India Muslim Personal Law Board (AIMPLB), was recently in Ahmedabad. During his two-day stay, he took part in several functions and inaugurated three buildings of Shama School and laid the foundation of an ITI in Vatva area of the city. These educational institutions were founded by the Gujarat Sarvajnik Welfare Trust, an NGO striving to promote education among Muslims and to uplift their economic condition. The Trust is run by its founder trustee Afzal Memon. On the occasion, Ahmadabad-based Gujarat Siyasat’s editor Abdul Hafiz Lakhani interviewed Maulana Nadwi, who is also the Reactor of Nadwatul Ulema, Lucknow. Following are excerpts: 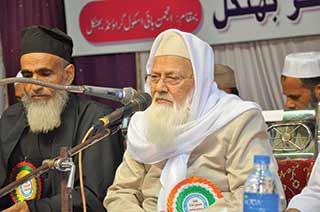 Modi government is planning to do away with the minority character of the Aligarh Muslim University and is also targeting the Jamia Millia Islamia. How do you view these developments?

The recent decision of the government opposing the minority character of the Aligarh Muslim University and Jamia Millia Islamia has shaken the confidence of the Muslim minority. It is a clear attempt to undermine the fundamental and constitutional rights accorded to the minorities by the Constitution of India. It is no secret that the Aligarh Muslim University was founded by the Muslim community which made huge sacrifices to keep it vibrant and robust. This historic institution is an embodiment of the sacrifices offered by Muslims and no governments can tinker with its historic character. The present government’s latest attempt also reflects its shaky commitment towards the diversity of the nation. It is part of the saffron agenda. It is politically motivated. However, we will fight against all odds.

If Modi government does not back off from anti-minority posturing, then what will be the response of AIMPLB?

As you are very well aware, since its inception AIMPLB’s main objective is to protect Sharia laws in the country. AMU’s case is different. It has legal and political dimensions. We will form a joint platform of Muslim organisations like JUH, JIH, AIMMM and Milli Council for protecting the minority character of AMU and Jamia Millia.

How do you view the growing atmosphere of intolerance and fear among Muslims and other sections of the society as communal popularization has been gaining momentum since the communal forces came to power?

Yes, the situation is alarming but we are watching closely every move of the government. Attempts are being made to push minorities into the grip of insecurity. We are analyzing each and every action of the government. We have a very strong constitution. It has given so many rights to minorities. Secularism is the essence of the country. Saffron elements have raised their ugly head, but I still believe that the Indian Constitution will protect minorities, Dalits and all weaker sections of society. Polarization is the enemy of progress and prosperity of the nation.

Once again the Ram Mandir issue is being raked to whip up communal passions in the country as assembly elections in UP are round corner. Subramanian Swamy and other BJP leaders are making provocative statements. How do you see the unfolding situation?

You are here for educational purpose. What is your assessment of the educational progress of the community after the Sachar report?

The 21st century is the century of knowledge. Qur’an’s first word is “Iqra” [Read!]. In the past, Muslims had attained the pinnacle in every faculty of knowledge but unfortunately they lost midway. It is heartening to see that we are now once again trying to regain lost ground. Islam gives utmost importance to education and it’s only through education that we can succeed and lead the world towards enlightenment. People of this era have far greater responsibilities than those before them. Allah has tasked us with the mission of spreading the light of knowledge. Responsibility is given only to those who have the ability to discharge it. We have the example of our Prophet from whom we can learn as to how we can spread education.

There were reports in the media that PMO tried to arrange a meeting between you and Prime Minister Narendra Modi. What is the truth?

It is not correct. These are baseless reports. No initiative was taken from any side. We are watching. Right now the AIMPLB has no plan of meeting any top functionaries of the government. Constitution and judiciary are the cornerstones of our great country.