Two RTI replies by the Ayush Ministry have confirmed the blatant bias of the Ministry when it comes to employing Muslims. The total number of Muslim employees in the Ministry is 3.1 per cent (6 out of 196 employees). But  if you substract the Unani staff, the percentage comes down to a mere 0.86 percent! Another RTI reply from the same ministry confirms that for last year’s Yoga Programme, no Muslim was in the selection committee or among the candidates invited for an interview or in the selected candidates’ list! 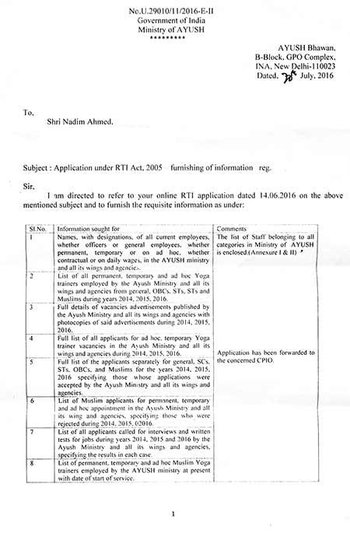 Adv. Nadim Ahmad sent an RTI query on 14 June, 2016. To date he has received two replies from the Ayush Ministry - one from Ramanand Meena, CPIO & Dy. Secretary to the Govt of India, dated 15 July 2016, saying that “the information doesn’t exist in such a form as sought by you”. But a second reply from the same ministry, dated 20 July, 2016 and signed by Daniel E. Richards, Director and CPIO of the Ministry of Ayush, provided the current staff’s list at the ministry, while also forwarded the application to “Concerned CPIO” at other sections and agencies of the ministry. The reply provides four lists of the employees of the Ayush [Ayurved, Unani, Siddha and Homeopathy] Ministry. The first list consists of 84 names, the second has 34, the third 55 while the fourth has 23 names. A footnote to one of the lists says that lists of certain employees are kept with the Ministry of Health and Family Welfare. 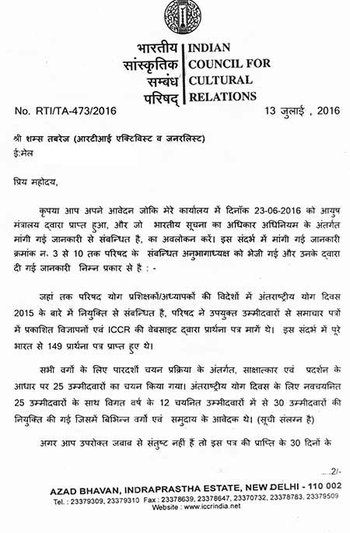 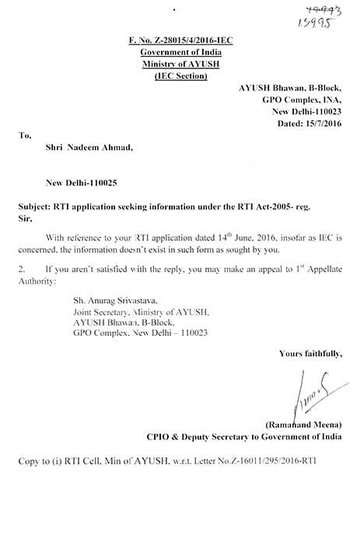 A second RTI application, filed by the Ghazipur-based journalist and RTI activist Shams Tabrez on 23 June, 2016, elicited a reply dated 13 July (ref. No. RTI/TA-473/2016) from the Indian Council of Cultural Relations which handles the Yoga business of the Ayush Ministry. It gives information about the process of selection of Yoga teachers-cum-performers to work at the Indian cultural centres abroad in 2015. The reply fails to provide the full list of the applicants saying that only 152 persons had applied for the post, out of whom 111 candidates were called for interviews over three days in March 2015. Among  the eight selection committee members, none belonged to a minority. The committee recommended 25 persons for placement/appointment on long-term basis and 36 persons for short-term temporary postings at various Indian missions abroad for the celebration of the International Yoga Day. Surnames betray that almost all the 61 selected candidates belong to upper castes and none to a minority, let alone a Muslim!

These two RTI replies prove that The Milli Gazette report (16-30 March, 2016 issue) by Pushp Sharma was not wide of the mark. Yet Ayush Ministry has found it appropriate to slap a case against the reporter and send him  to jail (he is on bail now) while DCP Licensing of Delhi Police has issued a show-cause notice to the newspaper saying why its declaration (licence to publish) should not be cancelled. Press Council of India (PCI), supposed to protect freedom of the press and journalists, has filed a suo motu case against the newspaper for publishing “allegedly fabricated news”. Since the case was already sub-judice, PCI has no locus standi in the case and this was clearly intimated to the august body but it nonetheless decided to continue the case although it was clearly against the provisions of its own law (Section 14(3) of the Press Council Act, 1978) which says that the PCI is not empowered “to hold any inquiry into any matter in respect of which any proceeding is pending in a court of law.”

The first hearing in the PCI case was held on 12 July. An administrator of The Milli Gazette, holding BTech and MBA degrees from a central university, was ridiculed by members who dubbed him as “arrogant and semi-literate”. Some members did not appreciate the straightforward and matter-of-factly replies of the MG representative. One of the members exposed his mentality when he said during the hearing: why the publisher of The Milli Gazette has not been jailed!