Naik’s crime is to openly call non-Muslims to Islam

Mumbai:  The Government’s noose around the renowned Islamic preacher, Zakir Naik, and his Islamic Research Foundation (IRF) has narrowed sufficiently and he is likely to be arrested once he returns to India. For the time being, he is putting up in an African country where he went, according to his office, on a scheduled visit, but his return journey is uncertain at present. 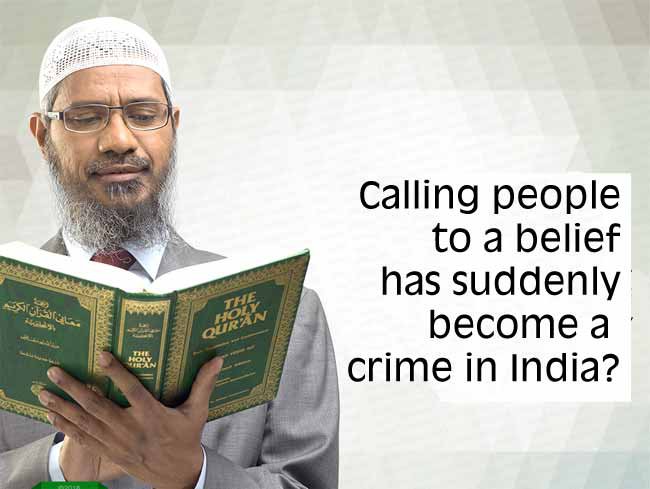 Dhaka police had arrested two youth on 4 August in connection with a terrorist attack on a restaurant there on 1 July this year. Indian media reported that the two arrested youth were influenced by the speeches of Dr. Zakir Naik. Soon the whole mainstream Indian media started demanding the declaration of Naik as a terrorist and his arrest at the earliest.

When these shrill demands were being made, Zakir Naik was in Saudi Arabia. It was the holy month of Ramadan and he was performing Umrah in Makkah Mukarramah. Dr Naik sent a video message to his countrymen refuting the charges labeled against him by the government and the Indian media.

The intensity with which a concerted campaign was being carried out against Dr. Naik was visible on every TV channel and newspaper which were competing with each other to prove him a terrorist. For example, one day, a Hindi news channel was airing its much-hyped “Halla Bol” programme which consisted of a panel discussion in which a number of media representatives were participating. It was hosted by Anjana Om Kashyap. The host, instead of playing an impartial role in carrying forward the discussion, was out and out inventing new titles for Naik as “Aatank-doot” (messenger of terrorism), “Aatankwadiyon ka guru” (spiritual guide of terrorists), “Aatanki bananey ki chalti phirti factory” (A mobile factory of producing terrorists), “Nafrat ka beej boney wala” (sower of the seed of hatred), “Zehar phelaney wala” (spreader of venom) and “jaahil” (illiterate). This whole programme consisted of calls like Zakir Naik “ko maaro” and “pakro”, “giriftar karo” (beat him up, nab him, arrest him). Anjana Kashyap, the anchor, was zealously supporting it all. She should have steered the debate to a constructive and objective discussion, questioned the claims of the participants and reached a constructive conclusion. Instead, it was a naked ‘media trial,’ totally at variance with our “criminal trial” system which requires evidences and proofs to convict someone. The fourth pillar of our democracy does not require such standards.  The two bases used to incriminate Zakir Naik are not linked at all with each other.

The first basis is that a terrorist who was involved in Dhaka bomb blasts had shared some thoughts of Dr. Naik on his facebook page. This news was published in the Bangladeshi daily, Daily Star and denied a day later. But our media lapped up the first report without any verification, terming Zakir Naik as “Aatank-doot” (messenger of terrorism). If this is taken as a rule, almost every user of facebook would be held as an accused because every user is influenced by someone else and shares his post or sayings in his circle, while the person whose post is being shared remains totally unaware of who is his follower.

The second basis is with reference to Osama bin Laden. It is alleged that Zakir Naik incited every Muslim to become Osama bin Laden. I have seen this video in which, while mentioning America’s terrorism, Naik praises Osama bin Laden in the sense that he has terrified America. In the same video he also says that if Osama is right, he would go to Heaven and if he is not on the right path he would go to Hell. After this, Dr Naik added “Wallah A’alam” (And God knows best). This video belongs to the period when Osama was still alive and Dr. Naik had said this in reply to a question. This cannot be taken as promoting terrorism. If it is so, all those who go to Pakistan to meet Hafiz Saeed and support Sadhavi Pragya Singh and Swami Aseemanand and have floated their pictures on social media, should also be held as promoters of terrorism. In fact, the group which has mostly benefited from terrorism is the one which claims that terrorism is the greatest hindrance in the development of the country.

When Zakir Naik’s case was very much in the news, the former police commissioner of Mumbai and the present BJP MP from Baghpat, Satya Pal Singh, had said that in 2008 he had a number of proofs against Zakir Naik which he passed on to the Central government then run by the Congress Party. No action was taken against Zakir Naik at that time, he said. Muslims were also divided at that time in two groups. One group supported Naik, which said that through Naik the government wants to terrorise all Muslims and, after getting him the Government will strike at other Muslim leaders. That’s why Muslims had come openly in favour of Zakir Naik. Congress MP, Ghulam Nabi Azad, spoke at that time in Parliament in his favour displaying his anger agaist the media trial and asking why Naik is blamed without any proof.

The other Muslim group favoured a ban on him and demanded his arrest. This group included Shias as well as Barelavi Muslims. The head of the Raza Academy of Mumbai, Saeed Noori, went a step further and protested against Zakir Naik and gave a memorandum to the police demanding his arrest. These two groups opposed him on the basis of his sect and not on any solid ground. The Shia sect opposed Naik because he had invoked “Rahmatullah” (May God have Mercy on him!) on Yazid, while Barelavis opposed him for his belonging to the Ahl-e-Hadees sect. These differences were displayed at a time when efforts were being made to declare the whole Muslim community including Zakir Naik as terrorists.

Now, let us discuss why the Central as well as the state governments, the national media and a particular Muslim group all have ganged up against Dr. Naik? The reply to this question is found clearly in the programmes of Zakir Naik during which some non-Muslims openly convert to Islam. This was not at all acceptable to our governments, particularly to some police officers who suffer from Sanghi mindset. For example, look at the report of the then Mumbai police chief Satya Pal Singh, in which he held the speeches of Dr. Naik responsible for creating distance beween Hindus and Muslims and his suggestion to the Centre to take action against him. People belonging to the Sangh ideology were finding it difficult to swallow the open conversion of non-Muslims to Islam. Such people sent negative reports against Naik’s programmes and got the government to issue orders to ban holding of Zakir Naik’s programmes on the sprawling Somiya Ground of Mumbai.

When a Bangla newspaper reported that the attackers of the Dhaka Restaurant were influenced by Zakir Naik, the Central Governmment and the saffronised national media started attacking and defaming Zakir Naik. This campaign started at a time when no enquiry or agency had pointed any finger towards Dr. Naik and the government had just ordered an enquiry. In spite of this, Zakir Naik was portrayed as if his IRF is a camp for terror training. Then the Mumbai police started an enquiry of Zakir Naik and IRF, sifting through his speeches. It submitted its report on 9 August saying that Zakir Naik is involved in unlawful activities. After that his Peace TV was officially banned in India.

It is worth-noting here that Mumbai Police, ATS and other agencies hold the Salafi (Ahl-e-Hadees) group of Muslims, which also includes Zakir Naik, as dangerous. For this reason, when the police arrests some Muslim youth on the charge of terrorism or having any connection with some banned organisation, he is given a chance to pray and the officers carefully watch his mode of praying. If he does “raf’i-yadain” (lifts his hands) during the prayer, he is taken as a “Salafi”, deserving no leniency. Mumbai police is particularly harsh towards the Ahl-e-Hadees sect and keeps an eye on them. This is the reason why Dr. Naik and his IRF were on the radar of the police in the first place. Maharashtra police had already started rounding up Muslim youth in the state for alleged links with ISIS. In January 2016, 18 people were arrested, out of which eight were let off and 10 were sent to jail on the charge of having links with ISIS. Then in July 2016, a group of 16 more Muslim youth was rounded up, out of which 12 were released and four were sent to jail.

Afterwards, preparations were made to arrest Zakir Naik and police chalked out a programme with the help of legal experts. Now only a complaint against him was needed in order to pounce on him. The first complaint was made against Arshi Qureshi, who had lived in America for 15 years, before returning to India in 2010. Police accused him of having a connection with IRF. A complaint was made against him by a Keralite Christian claiming that Arshi tempted his sister to accept Islam, after which she disappeared alongwith her Muslim husband. Police arrested Arshi on the basis of this complaint. First, Kerala Police registered an FIR against him, after which Mumbai ATS registered another FIR against Arshi. This case has now been referred to Mumbai Crime Branch. Thereafter, Maharashtra ATS arrested a youth called Rizwan from Kalyan, a Mumbai suburb, who was alleged to be a witness to the above-mentioned marriage and who helped Arshi Qureshi in convincing the Christian woman to convert and that he sent her husband outside the country to join ISIS. According to Karala Police, 21 people from the state have joined ISIS, most of whom were allegedly influenced by the IRF. After the arrest of Arshi Qureshi and Rizwan, the Mumbai Police arrested Muhammad Hanif from Panur, with the help of Kerala Police. He was accused of influencing 11 out of 21 people of Kerala, who left the state to join ISIS. According to police, Muhammad Hanif was the imam of a mosque in Panur and all the arrested people were in his contact while he himself (Muhammad Hanif) was in contact with IRF which had provided him with funds to influence people.

A second FIR was registered at Mumbai’s Nagpara Police station where one Abdul-Majeed, father of Muhammad Ashfaq, complained that Muhammad Hanif, Arshi Qureshi, Rizwan Khan and others brainwashed his son to join ISIS, after which the latter (his son) disappeared. Ashfaq’s father and his relatives told the police that Ashfaq and Hanif were seen together on many occasions. Arshi Qureshi and Rizwan Khan have been booked in Nagpara thana along with Muhammad Hanif. Earlier, both of them were under the custody of the Kerala Police. After these arrests, Mumbai police claimed to have collected many “proofs” to take action against Zakir Naik and IRF. It is busy at the moment to frame charges against Dr Naik.