Kolkata: Haji Nagar, Naihatti and Marwarikal areas are located at a distance of around 50 kms from Kolkata city. A Muharram procession, accompanied by practitioners of martial arts, came out from these areas at 11 pm on 9th Muharram (11 October). Soon a bomb was thrown at the procession. It landed in a garden pot in the courtyard of one Aftab but failed to explode, hence there were no casualties. Leaders of the procession stopped it fearing further attacks. But the police force accompanying the procession insisted that the procession should continue. Two prominent citizens of the area, Abdul Ghani Khan and Irshad Ahmad Ansari, said they will decide after consultations. After long consultations, these two elders informed the police that the procession will not move further and that people will disperse from that point. Police people did not appreciate this reply and started taunting the crowd, saying, ‘Are you afraid? Don’t fear anything as long as we are with you”. Thus some Muslim youth came forward and decided to continue with the procession although elders did not approve of it. Thus a smaller procession started moving at 1:30 am while a majority of the participants returned to their homes. This procession ended at 4:30 am. 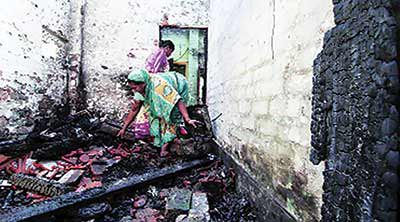 In the night of 12 October, 10th Muharram, while the Ashura procession was passing through the Naya Bazar area, several bomb explosions took place in the presence of the police and a stampede followed. Around 50-60 people were badly injured and rushed to a hospital. A few mischievous Muslim youth caused damage to some five non-Muslim houses and two shops. Then a mob attacked several Muslim areas. Riot and arson continued all night in Muslim neighborhoods and settlements. Riot-affected people cried for help but the police ignored their calls and secretly encouraged the rioters. Area MLA, MP and councilors slept throughout the night in their homes. The riot victims called Kolkata Muslim MLAs and MPs but no one responded to their frantic calls.  Some social activists repeatedly phoned Barackpore Police Commissioner who also failed to respond. The riots continued throughout the day and night of 13 and 14 October. On October 15, Rapid Action Force of Barrackpore was deployed in the affected areas. The riots now stopped but curfew was imposed.

A Milli Ittehad Parishad delegation consisting of five members toured the riot-affected areas alongwith a group of Kolkata-based journalists. The delegation tried to understand the causes of the riots. The team came to know that the rioters looted and burnt homes and shops in Belupara, Naya Bazar, H. K. Bhatta Road, Bara Talab, M. C. Mitra Road, Hukum Chand Jute Line, Prasad Nagar and Chowmatha Paper Mill areas. A large number of Muslims fled their homes as a result and took refuge elsewhere. There were 25 Muslim houses in Belupara village. Some TMC leaders and cadres arrived in the night of 13 October and told Muslims to come out of their homes so that they could be transported to a safer area. This team had some vehicles at its disposal. Some 125 Muslims came out of their homes and sat in these vehicles. The merciless TMC people abandoned these Muslims on a road and told them to go to their relatives. A woman came back to the village in the morning of 16 October to see her house. A crowd gathered in the presence of the area TMC councilor and told her never to return to the area if she valued her life. The crowd chased her away from the village.

Activists in the riot-affected area have started survey of the damage. They provided the fact-finding delegation with a list of the estimated damage in Belupara, Hukum Chand Bhat Road, Pucca Lane, M. C. Mitra Road and G. P. Road. According to their estimate, Muslim homes and shops in these five localities have suffered a loss of Rs. 25,041,000. Their survey is continuing. The damage in the other five areas is estimated at over Rs. 20,000,000. Thus within a span of four days, poor and middle class Muslims suffered damage of around five crore rupees. Ninety percent of the victims are poor Muslims who work in jute mills, shops and offices.

Over one thousand displaced persons are now living outside their homes. Some have taken shelter in the nearby safe areas while others have gone to Kamarhatti, Telnipara, Jagatdal, Kankinara and Kolkata. The Deputy Commissioner (DC) of Barrackpore was surprised when our delegation told him that rioters are still active and criminals are roaming free, stopping Muslims from returning to their homes. He was given the example of Belupara. He phoned the Officer Incharge of Nihatti police station who confirmed what the delegation had told the DC. A few homes and two shops of non-Muslims have also suffered damage estimated at 1.5 lakh rupees.

It came to light that the administration taunted and forced Muslim youth to proceed with the procession then allowed the rioters a free hand for four days. This shows that the officers were hand-in-glove with the rioters. A number of MLAs and councilors of the ruling TMC party were in constant touch with RSS, Bajrang Dal and VHP leaders and cadres and this is why police did not dare to fire at the rioters.

Mr. Mukul Roy is No. 2 in Mamta Bannerjee’s party. His son, S. Roy, is the MLA from Rai Bejpur. Muslims do not have a good opinion about him since he has been supporting communal forces for the last one year. People who are supporting the communal forces are mostly Hindi-speaking. They tried to attract Bangla-speakers but failed. We came to know that Ashok Chatterjee, chairman of the Municipal Committee of Naihatti and Partho Bhaumik, MLA of Naihatti, dissuaded the Bangla-speaking population from joining the communalists and succeeded in their efforts to a large extent.

We were told that most active in organizing riots are Vinod Das, Manoj and Dilip Sau, who are yet to be arrested by police. Ram Shankar Das of sand mafia is also a supporter of these elements. Secretary of the Barrackpore RSS Shakha, Vijay Sau, is the leader of these elements. He started the recitation of Hanuman Chalisa in Hallilshahar on 3 October according to Prabhat Khabar. Thousands of RSS workers had participated in this function. Five thousand and one laddoos (a sweet) were prepared for this function in which two BJP councilors took part in addition to those whose names are being mentioned as organisers of the riots. Anti-Muslim speeches were delivered during that function.

We also came to know that a person called Tapan Ghosh is active in the riot-striken areas of Kharva, Telnipara and Kamarhatti. He is seen active every year during Eid Al-Azha and Muharram pasting posters and distributing pamphlets in which he says Muslims play with knives and ballams (a sharp weapon) during Muharram but Hindus’ blood does not boil; they slaughter mother cow during Eid Al-Azha but Hindus’ blood does not boil. A few years back, a Milli Ittehad Parishad delegation presented copies of these posters and pamphlets to the Kolkata Police. The Police Commissioner had said at the time that this person lives near Mochipara police station but what he can do to restrain him? He is arrested but courts set him free, he said.

Tapan Ghosh has instigated riots in Diamond Harbor and Noakhali areas. A delegation of Millli Ittehad Parishad met this person. He said he was a pracharak of RSS for 25 years but now has established Hindu Sangati Samiti. He has visited Israel and the US. He thinks all Muslims of the world are terrorists. He uses whatsapp to disseminate his communal propaganda.

The communalist crowd, which is headed by Sangh Parivar people, did not support BJP whole-heartedly during the last elections. Instead, they preferred to support TMC. They say they are preparing for the 2019 elections. BJP is active with 2019 elections in sight.

BJP people succeeded this year in instigating riots in around 20 places during Eid Al-Azha and Muharram. They succeeded in continuing the riots for four days in Hajinagar, Naihatti and Marwarikal with the cooperation of the local police and the ruling TMC. Over 150 persons were injured during these riots. One of the victims is Dr. Muhammad Shafiq Ansari who was left to die after one of his legs was chopped off. He is struggling for his life in P. G. Hospital at present.

It was observed that the rioters did not wish to kill Muslims. Their plan was to attack them so that they flee leaving behind their homes and lands. The rioters looted abandoned homes and shops. Persons from outside the affected areas also took part in the rioting. They came on motorcycles, looted and went back.

West Bengal government is silent on these riots despite the fact that the Chief Minister Mamta Bannerjee has tweeted that communalism is more dangerous than terrorism. TMC Vice President Mukul Roy organised a peace march which went through Hindu areas but did not bother to enter Muslim areas. Moreover, he did not include any Muslim MP or MLA in his march. On the other hand, police prevented opposition leaders from entering the riot-affected areas.

The main aim of the riot was to boost BJP’s political power in order to use it in 2019. The other aim was to  teach a lesson to Muslims and force them not to oppose BJP. The third aim was to capture the space of opposition in West Bengal. The ruling TMC thinks CPIM and Congress are bigger threats than BJP. TMC is trying to win over Congress and CPIM MLAs and councilors. Some five Congress MLAs and a number of corporators have already joined TMC. A number of Left MLAs and councilors too have joined the ruling party. The current state government does not want any strong opposition in the state. BJP on its side is struggling to occupy the opposition slot in the state. Communalists realise that this will not be possible until whole Bengal is engulfed in the fire of communalism. To achieve this, Sangh Parivar has prepared a road-map to instigate riots in Bengal. Time alone will say what role the current ruling party plays in allowing this to happen. In their FIRs, local people have included the names of Sangh Parivar people as well as ruling TMC leaders but no action has been taken so far on these FIRS.